"the View From Nowhere" 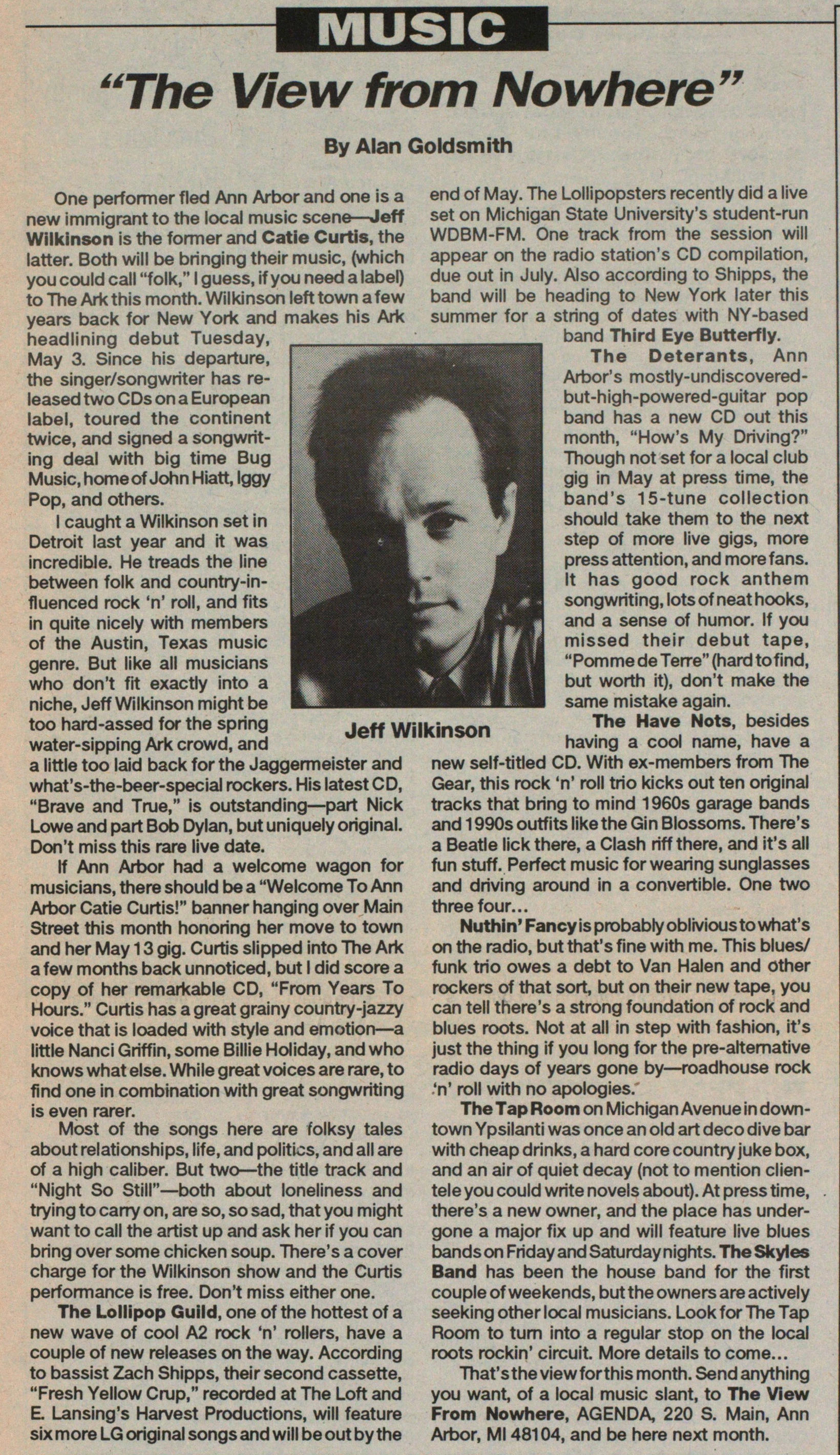 One performer fled Ann Arbor and one s a new immigrant to the local music scène - Jeff Wilkinson is the former and Catie Curtís, the latter. Both will be bringing their music, (which you could cali "folk," I guess, if you need a label) to The Arkthis month. Wilkinson lefttown afew years back for New York and makes his Ark headlining debut Tuesday, May 3. Since his departure, the singersongwriter has released two CDs on a European label, toured the continent twice, and signed a songwritng deal with big time Bug Music, homeof John Hiatt, Iggy Pop, and others. I caught a Wilkinson set in Detroit last year and it was incredible. He treads the line between folk and country-influenced rock 'n' roll, and fits in quite nicely with members of the Austin, Texas music genre. But like all musicians who don 't fit exactly into a niche, Jeff Wilkinson might be too hard-assed for the spring water-sipping Ark crowd, and a little too laid back for the Jaggermeister and what's-the-beer-special rockers. His latest CD, "Brave and True," is outstanding - part Nick Lowe and part Bob Dylan, but uniquely original. Don't miss this rare live date. If Ann Arbor had a welcome wagon for musicians, there should be a "Welcome To Ann Arbor Catie Curtís!" banner hanging over Main Street this month honoring her move to town and her May 1 3 gig. Curtís slipped into The Ark a few months back unnoticed, but I did score a copy of her remarkable CD, "From Years To Hours." Curtís has a great grainy country-jazzy voice that is loaded with style and emotion - a little Nanci Griffin, some Billie Holiday , and who knows what else. While great voices are rare, to find one in combination with great songwriting is even rarer. Most of the songs here are folksy tales about relationships, life, and politics, and all are of a high caliber. But two - the title track and "Night So Still" - both about loneliness and trying to carry on, are so, so sad, that you might want to cali the artist up and ask her if you can bring over some chicken soup. There's a cover charge for the Wilkinson show and the Curtís performance is free. Don't miss either one. The Lollipop Guild, one of the hottest of a new wave of cool A2 rock 'n' rollers, have a couple of new releases on the way. According to bassist Zach Shipps, their second cassette, "Fresh Yellow Crup," recorded at The Loft and E Lansing's Harvest Productions, will feature sixmore LG original songs and will beoutbythe end of May. The Lollipopsters recently did a live set on Michigan State University's student-run WDBM-FM. One track from the session will appear on the radio station's CD compilation, due out in July. Also according to Shipps, the band will be heading to New York later this summer for a string of dates with NY-based band Third Eye Butterfly. The Deterants, Ann Arbor's mostly-undiscoveredbut-high-powered-guitar pop band has a new CD out this month, "How's My Driving?" Though not set for a local club gig in May at press time, the band's 15-tune collection should take them to the next step of more live gigs, more press attent ion, and more fans. It has good rock anthem songwriting, lots of neat hooks, and a sense of humor. If you missed their debut tape, "Pomme de Terre" (hard tofind, but worth it), don't make the same mistake again. The Have Nots, besides having a cool name, have a new self-titled CD. With ex-members from The Gear, this rock 'n' roll trio kicks out ten original tracks that bring to mind 1960s garage bands and 1 990s outfits like the Gin Blossoms. There's a Beatle lick there, a Clash riff there, and it's all fun stuff. Perfect music for wearing sunglasses and driving around in a convertible. One two threefour... Nuthin' Fancy is probably oblivious to what's on the radio, but that's fine with me. This blues funk trio owes a debt to Van Halen and other rockers of that sort, but on their new tape, you can teil there's a strong foundation of rock and blues roots. Not at all in step with fashion, it's just the thing if you long for the pre-altemative radio days of years gone by - roadhouse rock 'n' roll with no apologies. The Tap Room on Michigan Avenue in down - town Ypsilanti was once an oid art deco dive bar with cheap drinks, a hard core country juke box, and an air of quiet decay (not to mention clientèle you could write novéis about). At press time, there's a new owner, and the place has undergone a major fix up and will feature live blues bandson Friday and Saturday nights. The Skyles Band has been the house band for the first couple of weekends, but the owners are actively seeking other local musicians. Look for The Tap Room to turn into a regular stop on the local roots rockin' circuit. More details to come... That's the view forthis month. Send anything you want, of a local music slant, to The View From Nowhere, AGENDA, 220 S. Main, Ann Arbor, Ml 481 04, and be here next month.