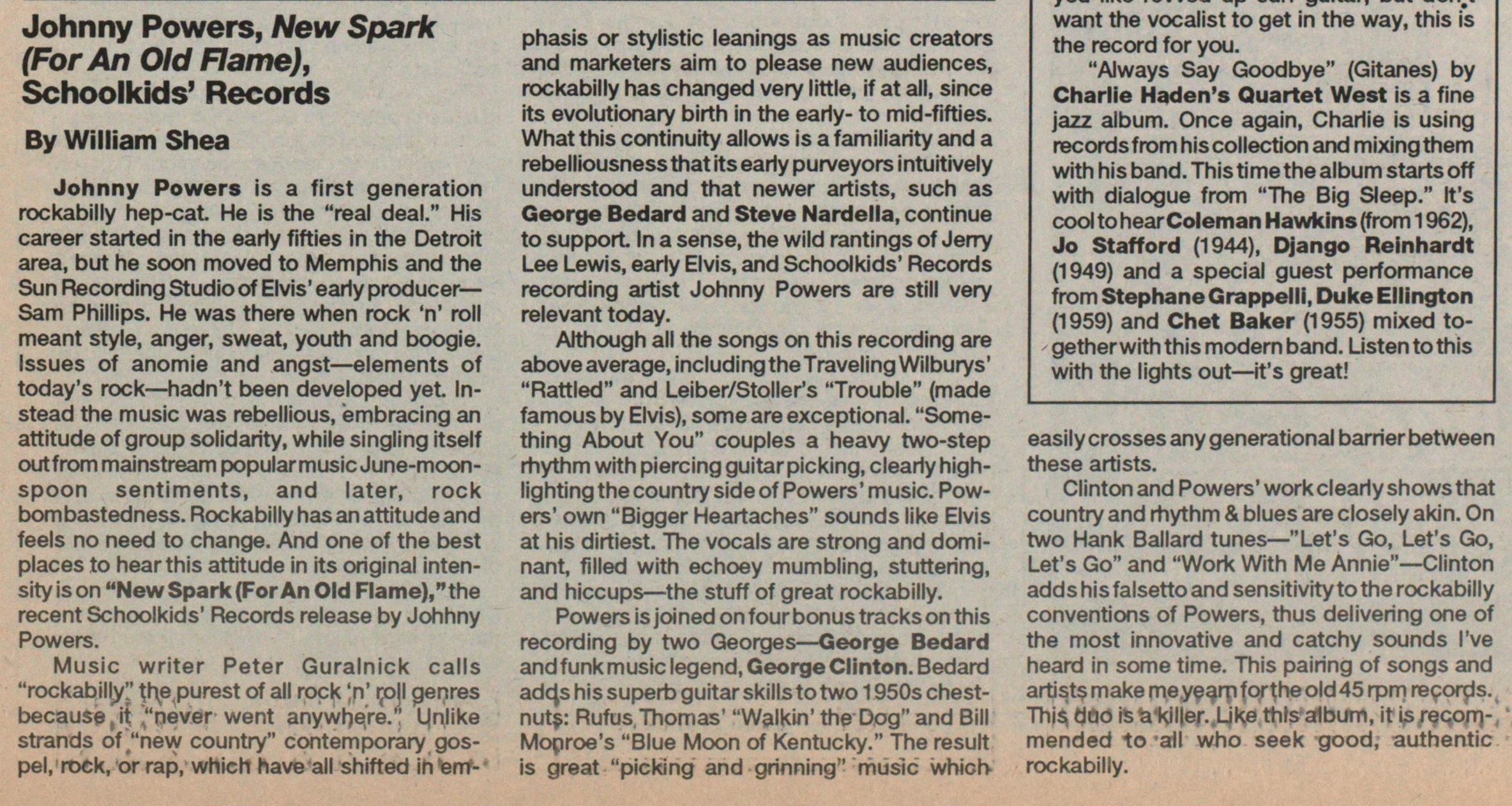 Johnny Powers is a first generation rockabilly hep-cat He is the "real deal." His career started in the early fifties in the Detroit área, but he soon moved to Memphis and the Sun Recording Studio of Elvis' early producer - Sam Phillips. He was there when rock 'n' roll meant style, anger, sweat, youth and boogie. Issues of anomie and angst - elements of today's rock - hadn't been developed yet. Instead the music was rebellious, embracing an attitude of group solidarity, while singling itself outfrommainstream popular music June-moonspoon sentiments, and later, rock bom bastedness. Rockabilly has an attitude and feels no need to change. And one of the best places to hearthis attitude in its original intensity is on "NewSpark(For An Old Flame),"the recent Schoolkids' Records release by Johhny Powers. Music writer Peter Guralnick calis "rockabilly" thepurest of all rock )n' ipjl genres because,it "rjever went anywl?e,re." Unlike strands of"new country" contemporary gospel, roek.or rap, which have all shifted in tent-' phasis or stylistic leanings as music creators and marketers aim to please new audiences, rockabilly has changed very little, if at all, since its evolutionary birth in the to mid-fifties. What this continuity allows s a familiarity and a rebelliousness that its early purveyors intuitively understood and that newer artists, such as George Bedard and Steve Nardella, continue to support In a sense, the wild rantings of Jerry Lee Lewis, early Elvis, and Schoolkids' Records recording artist Johnny Powers are still very relevant today. Although all the songs on this recording are above average, including theTraveling Wilburys' "Rattled" and LeiberStoller's "Trouble" (made famous by Elvis), some are exceptional. "Something About You" couples a heavy two-step rhythm with piercing guitarpicking, cleariy highlighting the country side of Powers ' m usic. Powers' own "Bigger Heartaches" sounds like Elvis at his dirtiest. The vocals are strong and dominant, filled with echoey mumbling, stuttering, and hiccups - the stuff of great rockabilly. Powers is joined on f our bonus tracks on this recording by two Qeorges - George Bedard and funk music legend, George Clinton. Bedard adcjs his superb guitar skills to two 1 950s chestnuts: Rufus, Thomas' "Walkin' theDog" and Bill Monroe's "Blue Moon of Kentucky." The result is great "picking and grinning" music easily crosses any generational banier between these artists. Clinton and Powers' work clearly shows that country and rhythm & blues are closely akin. On two Hank Ballard tunes - "Let's Go, Let's Go, Let's Go" and "Work With Me Annie"- Clinton adds his falsetto and sensitivity to the rockabilly conventions of Powers, thus deiivering one of the most innovative and catchy sounds l've heard in some time. This pairing of songs and artists make meyearn fqrthe old 45 rpm records. Thjs,tjOö teakiller. üke thls-aibum, itiLfec,oiT]-i mended to all who seek good, authentic rockabilly.