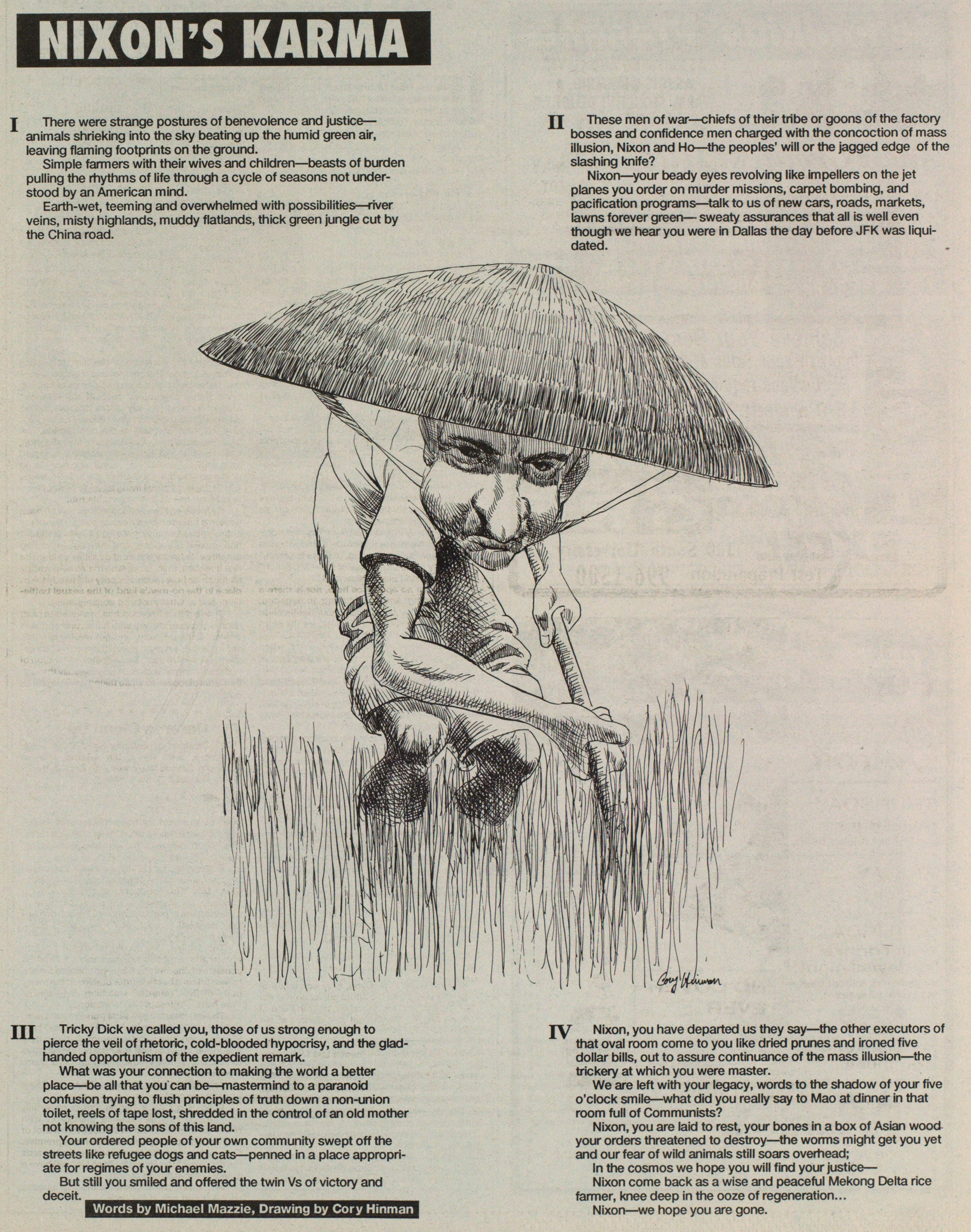 T There were strange postures of benevolence and justice - animáis shrieking into the sky beating up the humid green air, leaving flaming footprints on the ground. Simple farmers with their wives and children - beasts of burden pulling the rhythms of life through a cycle of seasons not understood by an American mind. Earth-wet, teeming and overwhelmed with possibilities - river veins, misty highlands, muddy flatlands, thick green jungle cut by the China road. These men of war- chiefs of their tribe or goons of the factory bosses and confidence men charged with the concoction of mass Ilusión, Nixon and Ho - the peoples' will or the jagged edge of the slashing knife? Nixon - your beady eyes revolving like impeliere on the jet planes you order on murder missions, carpet bombing, and pacification programs- talk to us of new care, roads, markets, lawns forever green - sweaty assurances that all is well even though we hear you were in Dallas the day before JFK was liquidated. Tricky Dick we called you, those of us strong enough to pierce the veil of rhetoric, cold-blooded hypocrisy, and the gladhanded opportunism of the expedient remark. What was your connection to making the workj a better place - be all that you can be - mastermind to a paranoid confusión trying to flush principies of truth down a non-union toilet, reels of tape lost, shredded in the control of an old mother not knowing the sons of this land. Your ordered people of your own community swept off the streets like refugee dogs and cats - penned in a place appropriate for regimes of your enemies. But still you smiled and offered the twin Vs of victory and deceit. jy Nixon, you have departed us they say- the other executors of that oval room come to you like dried prunes and roned five dollar bilis, out to assure continuance of the mass Ilusión - the trickery at which you were master. We are left with your legacy, words to the shadow of your five o'clock smile - what did you really say to Mao at dinner in that room full of Communists? Nixon, you are lakj to rest, your bones in a box of Asían wood your orders threatened to destroy - the worms might get you yet and our fear of wild animáis still soars overhead; In the cosmos we hope you will f ind your justice - Nixon come back as a wise and peaceful Mekong Delta rice farmer, knee deep in the ooze of regeneration... Nixon- we hope you are gone.