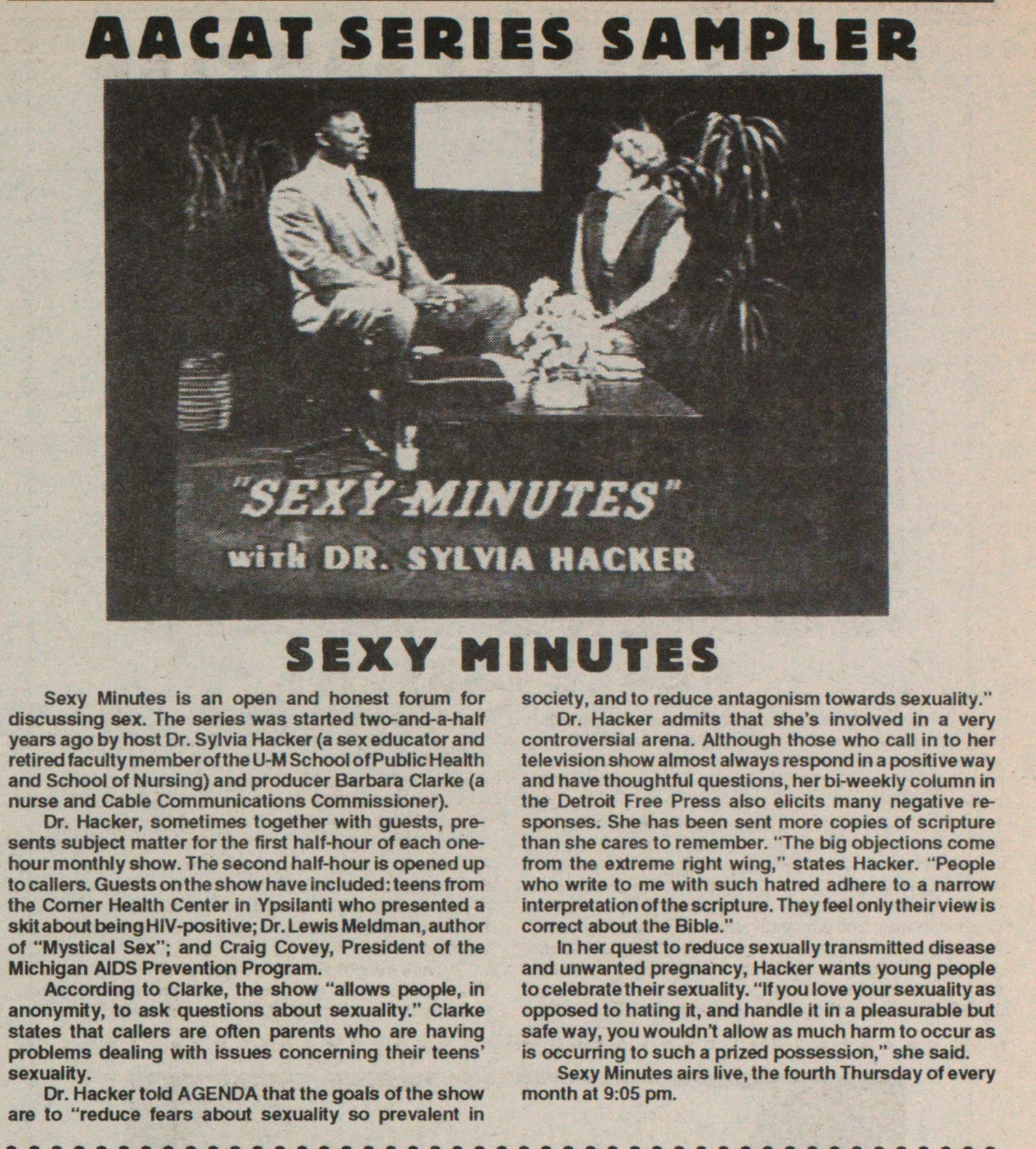 Sexy Minutes is an open and honest forum for discussing sex. The series was started two-and-a-half years ago by host Dr. Sylvia Hacker (a sex educator and retired facully memberof the U-M School of Public Health and School of Nursing) and producer Barbara Clarke (a nurse and Cable Communications Commissioner). Dr. Hacker, sometimes together with guests, presents subject matter for the first half-hour of each onehour monthly show. The second half-hour is opened up to callers. Guests on the show have included : teens trom the Comer Health Center in Ypsilanti who presented a skitaboutbeingHIV-positive; Dr. Lewis Meidman, author of "Mystical Sex"; and Craig Covey, President of the Michigan AIDS Prevention Program. According to Clarke, the show "allows people, in anonymrty, to ask questions about sexuality." Clarke States that callers are often parents who are having problems dealing with issues concerning their teens' sexuality. Dr. Hacker told AGENDA that the goals of the show are to "reduce fears about sexuality so prevalent in society, and to reduce antagonism towards sexuality." Dr. Hacker admits that she's involved n a very controversial arena. Although those who cali in to her televisión show almosl always respond in a positive way and have thoughtful queslions, her bi-weekly column in the Detroit Free Press also elicits many negative responses. She has been sent more copies of scripture than she cares to remember. "The big objedions come from the extreme right wing," states Hacker. People who write to me with such hatred adhere to a narrow interpret ation of the script ure. Theyfeelonlytheirview is correct about the Bible." In her quest to reduce sexually transmitted disease and unwanted pregnancy, Hacker wants young people to celébrate their sexuality. "If you love your sexuality as opposed to hating it, and handle it in a pleasurable but safe way, you wouldn't allow as much harm to occur as is occurring to such a prized possession," she said. Sexy Minutes airs live, the fourth Thursday of e very month at 9:05 pm. WRWSëMMUJAk