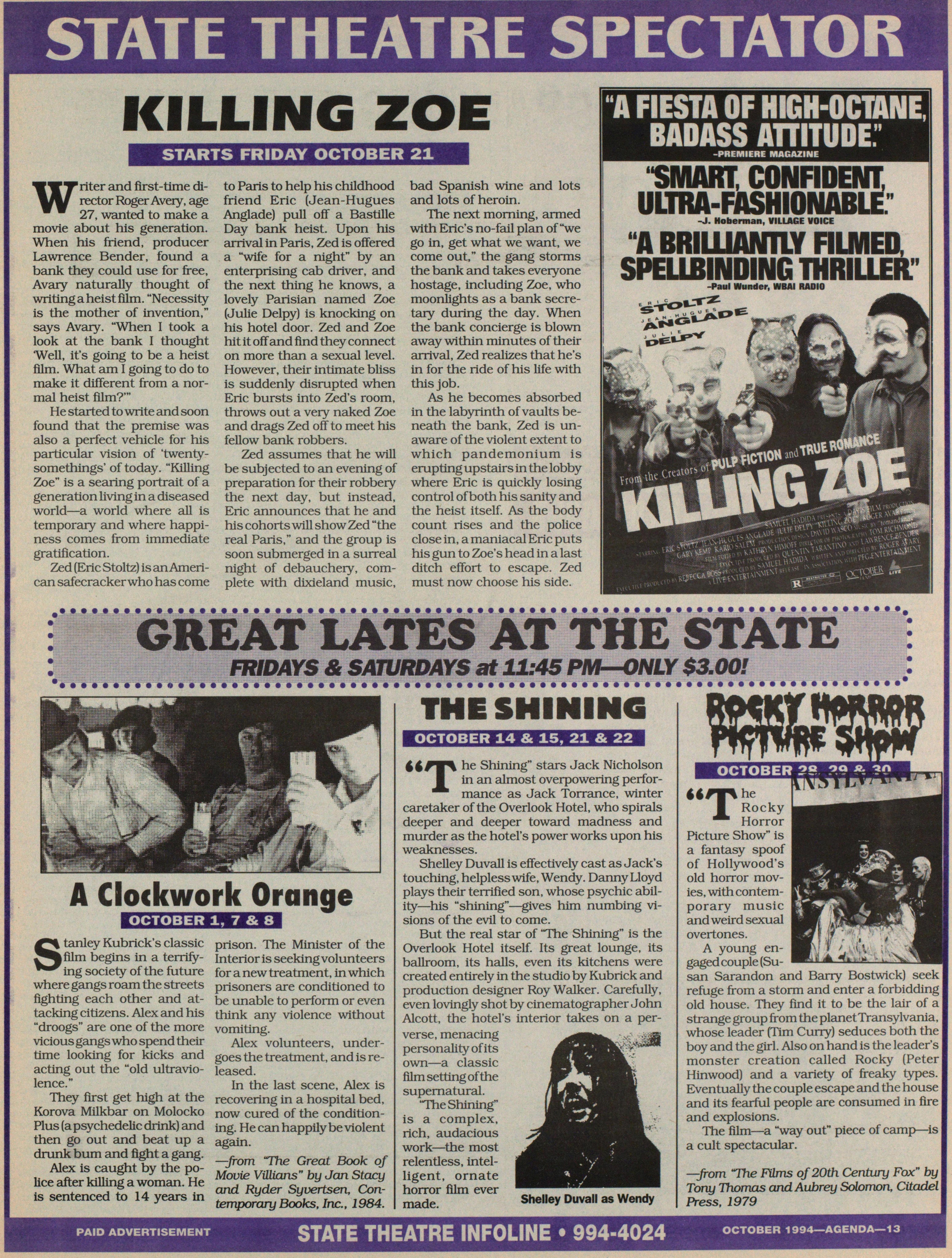 ■-Wd!IJdJ4Wi]il W riter and first-time director Roger Avery, age 27, wanted to make a movle about his generation. When his friend, producer Lawrence Bender, found a bank they could use for free, Avary naturally thought of writing a heist film. "Necessity is the mother of invention," says Avary. "When I took a look at the bank I thought Well, it's going to be a heist film. What am I going to do to make it different from a normal heist film?'" He started to write and soon found that the premise was also a perfect vehicle for his particular visión of 'twentysomethings' of today. "Killing Zoe" is a searing portrait of a generation living in a diseased world - a world where all is temporary and where happiness comes from immediate gratification. Zed (Eric Stoltz) is an American safecracker who has come to Paris to help his childhood friend Eric (Jean-Hugues Anglade) pull off a Bastille Day bank heist. Upon his arrival in Paris, Zed is offered a "wife for a night" by an enterprising cab driver, and the next thing he knows, a lovely Parisian named Zoe (Julie Delpy) is knocking on his hotel door. Zed and Zoe hit it off and find they connect on more than a sexual level. However, their intimate bliss is suddenly disrupted when Eric bursts into Zed's room, throws out a very naked Zoe and drags Zed off to meet his fellow bank robbers. Zed assumes that he wül be subjected to an evening of preparation for their robbery the next day, but instead, Eric announces that he and his cohorts will show Zed "the real Paris," and the group is soon submerged in a surreal night of debauchery, complete with dixieland music, bad Spanish wine and lots and lots of heroin. The next morning, armed with Eric's no-fail plan of "we go in, get what we want, we come out," the gang storms the bank and takes eveiyone hostage, including Zoe, who moonlights as a bank secretary during the day. When the bank conciërge is blown away within minutes of their arrival, Zed realizes that he's in for the ride of his life with thisjob. As he becomes absorbed in the labyrinth of vaults beneath the bank, Zed is unaware of the violent extent to which pandemonium is erupting upstairs in the lobby where Eric is quickly losing control of both his sanity and the heist itself. As the body count rises and the pólice close in, a maniacal Eric puts his gun to Zoe's head in a last ditch effort to escape. Zed must now choose his side. SMART, CONFIDEffl, ULTRA-FASHIONABLE -J. Hoberman, VILLAGE VOICE A BRIUIANTLY FILMED SPELIBINDING THRILLER" -Paul Wunder, WBAI RADIO I ■ -Èfy fl ttÜP Jf I BfcBjscM' & laif al Hk 'T : GREAT LATES AT THE STATE i I FRIDAYS & SATURDAYS at 11:45 PM-ONLY $3.00! l A Clockwork Orange Stanley Kubrick's classic film begins in a terrifying society of the future where gangs roam the streets fighting each other and attacking citizens. Alex and his "droogs" are one of the more vicious gangs who spend their time looking for kicks and acting out the "old ultraviolence." They first get high at the Korova Milkbar on Molocko Plus (a psychedelic drink) and then go out and beat up a drunk bum and fight a gang. Alex is caught by the police after killing a woman. He is sentenced to 14 years in prison. The Minister of the Interior is seekingvolunteers for a new treatment, in which prisoners are conditioneel to be unable to perform or even think any violence without vomiting. Alex volunteers, undergoes the treatment, and is released. In the last scène, Alex is recovering in a hospital bed, now cured of the conditioning. He can happilybe violent again. -from The Great Book of Movie Vülians" by Jan Stacy and Ryder Syvertsen, Contemporary Books, Inc., 1984. p..-.s 'L' - í .d ■ Ü! - iü!?jsi?Hi: JK! 3NÏW;ri. THE SHINING éé he Shining" stars Jack Nicholson in an almost overpowering performanee as Jack Torrance, winter caretaker of the Overlook Hotel, who spirals deeper and deeper toward madness and murder as the hotel's power works upon his weaknesses. Shelley Duvall is effectively cast as Jack's touching, helplesswife, Wendy. DannyLloyd plays their terrified son, whose psychic ability - his "shining" - gives him numbing visions of the evil to come. But the real star of The Shining" is the Overlook Hotel itself. lts great lounge, its ballroom, its halls, even its kitchens were created entirely in the studio by Kubrick and production designer Roy Walker. Carefully, even lovingly shot by cinematographer John Alcott, the hotel's interior takes on a perverse, menacing .ÉMI. "-''' '-"-áffi personalityofits M, ftte- own - a classic ■■ ■ film setting of the W W supernatural. mJPumI "The Shining" M iMj is a complex, [fl H rich, audacious A ■■■■ work - the most M k relentless, m ligent, órnate horror film ever Tf? made Shelley Duvall as Wendy ■rT.w.i:H:--"-'--Jm_l Rocky ' Horror I Picture Show" is I a fantasy spoof I of Hollywood's I ■ old horror I G2EGk fcml RfljpMfJ porary music I IpvH A young I ■' I i, ; -J "' 1M san Sarandon and Barry Bostwick) seek refuge from a storm and enter a forbidding old house. They find it to be the lair of a strange group from the planetTransylvania, whose leader (Tim Curry) seduces both the boy and the girl. Also on hand is the leader's monster creation called Rocky (Peter Hinwood) and a variety of freaky types. Eventually the couple escape and the house and its fearful people are consumed in fire and explosions. The film - a "way out" piece of camp - is a cult spectacular. -from The Films qf20th Century Fox" by Tony Thomas andAubrey Solomon, Citadel Press, 1979