"smoke In Your Eyes." 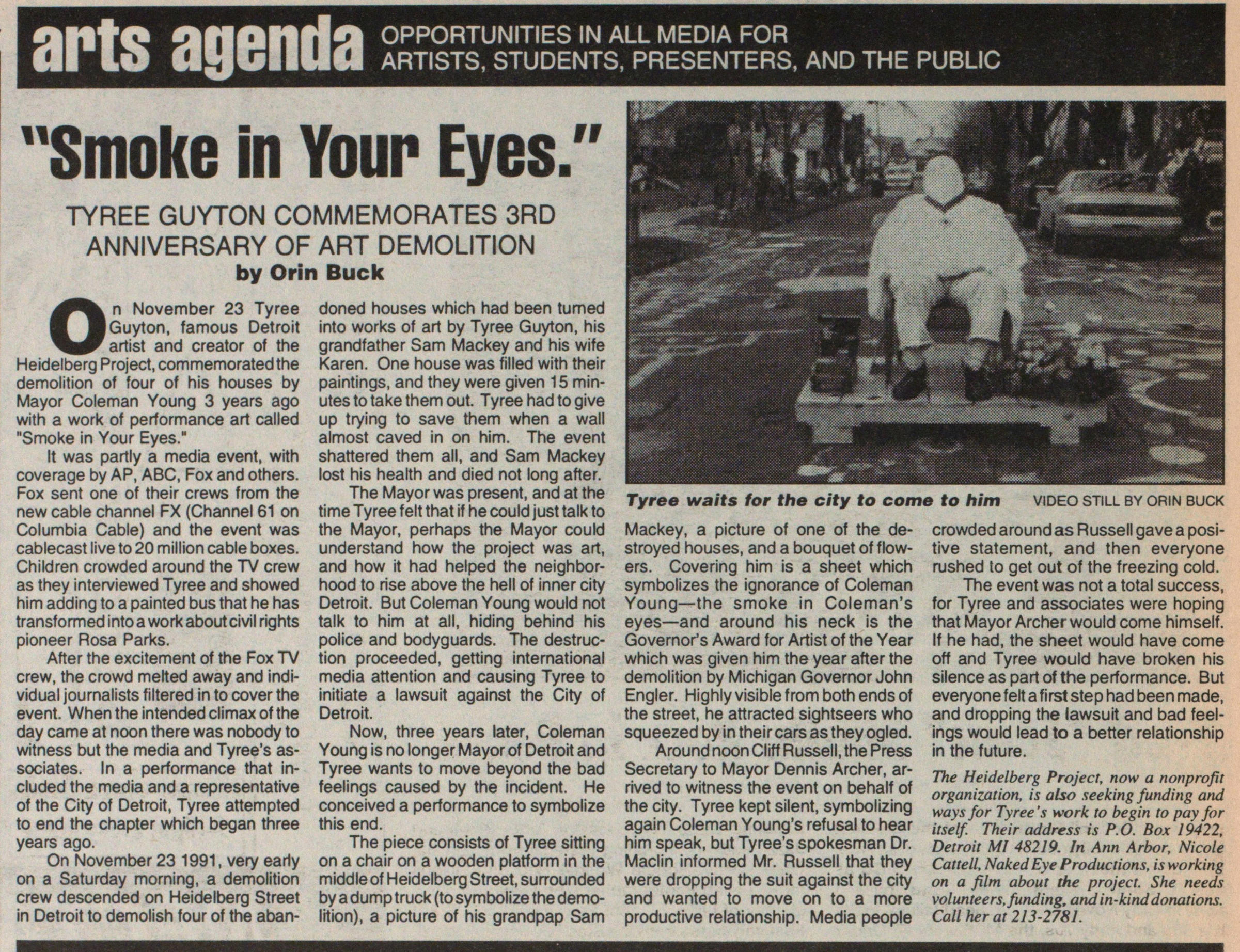 WUt&liMil.klIlBHBBBHHW On November 23 Tyree Guyton, famous Detroit artist and creator of the Heidelberg Project, commemoratedthe demolition of four of his houses by Mayor Coleman Young 3 years ago with a work of performance art called "Smoke n Your Eyes." It was partly a media event, with coverage by AP, ABC, Fox and others. Fox sent one of their crews from the new cable channel FX (Channel 61 on Columbia Cable) and the event was cablecast live to 20 million cable boxes. Children crowded around the TV crew as they interviewed Tyree and showed him adding to a painted bus that he has transformed into a work about civil rights pioneer Rosa Parks. After the excitement of the Fox TV crew, the crowd melted away and individual journalists filtered in to cover the event. When the intended climax of the day carne at noon there was nobody to witness but the media and Tyree's associates. In a performance that ncluded the media and a representative of the City of Detroit, Tyree attempted to end the chapter which began three years ago. On November 23 1991, very early on a Saturday morning, a demolition crew descended on Heidelberg Street in Detroit to demolish four of the doned houses which had been tumed nto works of art by Tyree Guyton, his grandfather Sam Mackey and his wife Karen. One house was filled with their paintings, and they were given 15 minutes to take them out. Tyree had to give up trying to save them when a wall almost caved in on him. The event shattered them all, and Sam Mackey lost his health and died not long after. The Mayor was present, and at the time Tyree feit that if he could just talk to the Mayor, perhaps the Mayor could understand how the project was art, and how it had helped the neighborhood to rise above the heil of inner city Detroit. But Coleman Young would not talk to him at all, hiding behind his pólice and bodyguards. The destruction proceeded, getting international media attention and causing Tyree to initiate a lawsuit against the City of Detroit. Now, three years later, Coleman Young is no longer Mayor of Detroit and Tyree wants to move beyond the bad feelings caused by the incident. He conceived a performance to symbolize this end. The piece consists of Tyree sitting on a chair on a wooden platform in the middle of Heidelberg Street, surrounded by a dump truck (to symbolize the demolition), a picture of his grandpap Sam Mackey, a picture of one of the destroyed houses, and a bouquet of ftowers. Covering him is a sheet which symbolizes the ignorance of Coleman Young- the smoke in Coleman's eyes- and around his neck is the Governor's Award for Artist of the Year which was given him the year after the demolition by Michigan Governor John Engler. Highly visible f rom both ends of the street, he attracted sightseers who squeezed by in their cars as they ogled. Around noon Cliff Russell, the Press Secretary to Mayor Dennis Archer, arrived to witness the event on behalf of the city. Tyree kept silent, symbolizing again Coleman Young's refusal to hear him speak, but Tyree's spokesman Dr. Maclin nformed Mr. Russell that they were dropping the suit against the city and wanted to move on to a more productive relationship. Media people crowded around as Russell gave a positive statement, and then everyone rushed to get out of the freezing cold. The event was not a total success, for Tyree and associates were hoping that Mayor Archer would come himself . If he had, the sheet would have come off and Tyree would have braken his silence as part of the performance. But everyone feit afirst step had been made, and dropping the lawsuit and bad feelngs would lead to a better relationship in the future. The Heidelberg Project, now a nonprofii organization, is also seeking funding and waysfor Tyree's work to begin to payfor itself. The ir address is P.O. Box 19422, Detroit Ml 48219. In Ann Arbor, Nicole Cattell, NakedEye Productions, is working on a film about the project. She needs volunteers.funding, and in-kind donations. Cali her at 213-2781.