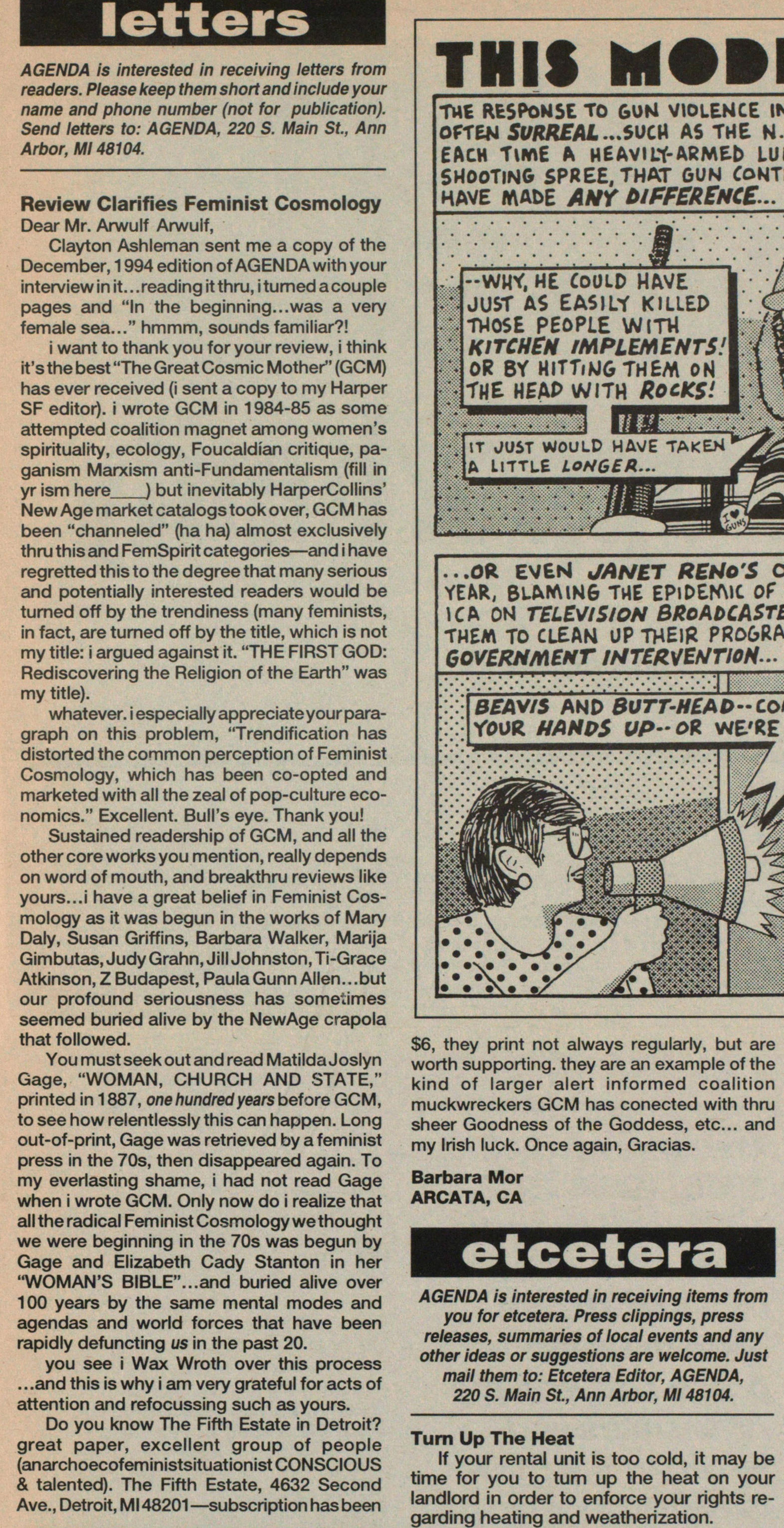 AGENDA is interested in receiving letters f rom readers. Please keep them short and include your name and phone number (not for publication). Send letters to: AGENDA, 220 S. Main St., Ann Arbor, Ml 48104. Dear Mr. Arwulf Arwulf, Clayton Ashleman sent me a copy of the December, 1 994 edition of AGENDA with your interview in it. . . reading it thru, i tumed a couple pages and "In the beginning... was a very female sea..." hmmm, sounds familiar?! i want to thank you for your review, i think it's the best "The Great Cosmic Mother" (GCM) has ever received (i sent a copy to my Harper SF editor), i wrote GCM in 1 984-85 as some attempted coalition magnet among women's spirituality, ecology, Foucaldían critique, paganism Marxism anti-Fundamentalism (fill in yr ism here ) but inevitably HarperCollins' New Age marketcatalogstook over, GCM has been "channeled" (ha ha) almost exclusively thru this and FemSpirit categories - and i have regretted this to the degree that many serious and potentially interested readers would be turned off by the trendiness (many feminists, in fact, are turned off by the title, which is not my title: i argued against it. "THE FIRST GOD: Rediscovering the Religión of the Earth" was my title). whatever. i especial lyappreciateyourparagraph on this problem, "Trendification has distorted the common perception of Feminist Cosmology, which has been co-opted and marketed with all the zeal of pop-culture economics." Excellent. Bull's eye. Thank you! Sustained readership of GCM, and all the other core works you mention, real lydepends on word of mouth, and breakthru reviews like yours...i have a great belief in Feminist Cosmology as it was begun in the works of Mary Daly, Susan Griffins, Barbara Walker, Marija Gimbutas, Judy Grahn, Jill Johnston, Ti-Grace Atkinson, Z Budapest, Paula Gunn Allen. . . but our profound seriousness has sometimes seemed buried alive by the NewAge crapola that followed. You must seek out and read Matilda Joslyn Gage, "WOMAN, CHURCH AND STATE," printed in 1887, onehundredyearsbeforeGCM, to see how relentlessly this can happen. Long out-of-print, Gage was retrieved by a feminist press in the 70s, then disappeared again. To my everlasting shame, i had not read Gage when i wrote GCM. Only now do i realize that all the radical Feminist Cosmology we thought we were beginning in the 70s was begun by Gage and Elizabeth Cady Stanton in her "WOMAN'S BIBLE"...and buried alive over 100 years by the same mental modes and agendas and world torces that have been rapidly defuncting us in the past 20. you see i Wax Wroth over this process ...and this is why i am very grateful for acts of attention and refocussing such as yours. Do you know The Fifth Estáte in Detroit? great paper, excellent group of people (anarchoecofeministsituationistCONSCIOUS & talented). The Fifth Estáte, 4632 Second Ave., Detroit, MI48201 - subscription has been $6, they print not always regularly, but are worth supporting. they are an example of the kind of larger alert informed coalition muckwreckers GCM has conected with thru sheer Goodness of the Goddess, etc... and my Irish luck. Once again, Gracias.