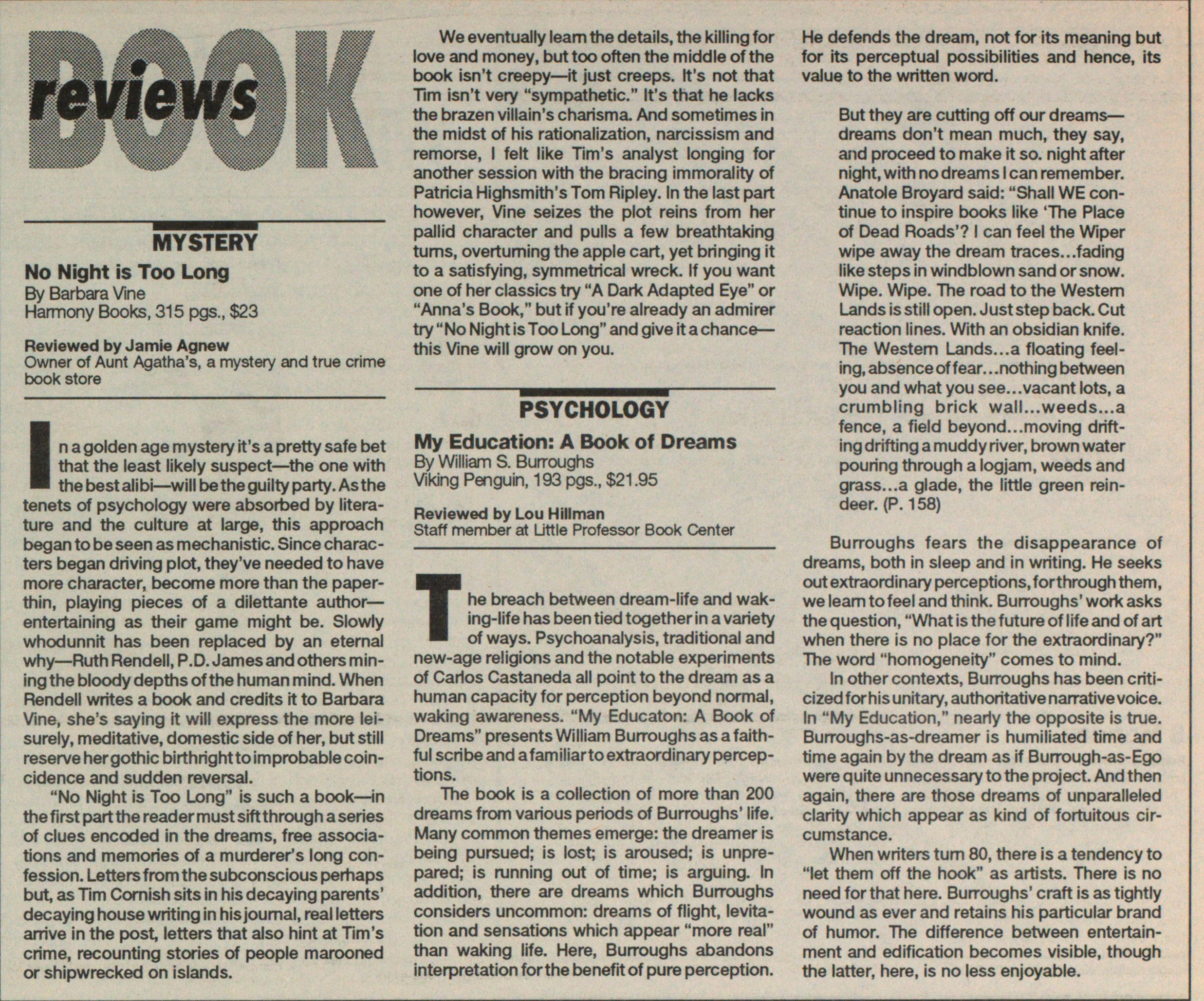 In a golden age mystery it's a pretty safe bet that the least likely suspect- the one with the best alibi - will be the guilty party. As the tenets of psychology were absorbed by literature and the culture at large, this approach began to be seen as mechanistic. Since characters began driving plot, they've needed to have more character, become more than the paperthin, playing pieces of a dilettante author- entertaining as their game might be. Slowly whodunnit has been replaced by an eternal why - Ruth Rendell, P.D. James and others mining the bloody depths of the human mind. When Rendell writes a book and credits it to Barbara Vine, she's saying it will express the more leisurely, meditative, domestic side of her, but still reserve her gothic birthright to improbable coincidence and sudden reversal.

"No Night is Too Long" is such a book - in the first part the reader must sift through a series of clues encoded in the dreams, free associations and memories of a murderer's long confession. Letters from the subconscious perhaps but, as Tim Cornish sits in his decaying parents' decaying house writing in his Journal, real letters arrive in the post, letters that also hint at Tim's crime, recounting stories of people marooned or shipwrecked on islands.

We eventually leam the details, the killing for love and money, but too often the middle of the book isn't creepy-it just creeps. It's not that Tim isn't very "sympathetic." It's that he lacks the brazen villain's charisma. And sometimes n the midst of his rationalization, narcissism and remorse, I feit like Tim's analyst longing for another session with the bracing immorality of Patricia Highsmith's Torn Ripley. In the last part however, Vine seizes the plot reins from her pallid character and pulls a few breathtaking tums, overtuming the apple cart, yet bringing it to a satisfying, symmetrical wreek. If you want one of her classics try "A Dark Adapted Eye" or "Anna's Book," but if you're already an admirer try "No Night is Too Long" and give it a chance - this Vine will grow on you.

The breach between dream-life and waking-life has been tied together in a variety of ways. Psychoanalysis, traditional and new-age religions and the notable experiments of Carlos Castañeda all point to the dream as a human capacity for perception beyond normal, waking awareness. "My Education: A Book of Dreams" presents William Burroughs as a faithful scribe and a familiar to extraordinary perceptions.

The book is a collection of more than 200 dreams from various periods of Burroughs Iife. Many common themes emerge: the dreamer is being pursued; is lost; is aroused; is unprepared; is running out of time; is arguing. In addition, there are dreams which Burroughs considers uncommon: dreams of flight, levitation and sensations which appear "more real" than waking life. Here, Burroughs abandons interpretation for the benefit of pure perception.

He defends the dream, not for its meaning but for its perceptual possibilities and henee, its value to the written word. But they are cutting off our dreams-dreams don't mean much, they say, and proceed to make it so. night after night, with no dreams I can remember. Anatole Broyard said: "Shall WE continue to inspire books like 'The Place of Dead Roads'? I can feel the Wiper wipe away the dream traces... fading like steps in windblown sand or snow. Wipe. Wipe. The road to the Western Lands is still open. Just step back. Cut reaction lines. With an obsidian knife. The Western Lands... a floating feeling, absence of fear. . . nothing between you and what you see... vacant lots, a crumbling brick wall...weeds...a fence, a field beyond...moving drifting drifting a muddy river, brown water pouring through a logjam, weeds and grass...a glade, the little green reindeer. (P. 158)

Burroughs fears the disappearance of dreams, both in sleep and in writing. He seeks out extraordinary perceptions, forthrough them, we learn to feel and think. Burroughs' work asks the question, "What is the future of life and of art when there is no place for the extraordinary?" The word "homogeneity" comes to mind.

In other contexts, Burroughs has been criticized for his unitary, authoritative narrative voice. In "My Education," nearly the opposite is true. Burroughs-as-dreamer is humiliated time and time again by the dream as f Burrough-as-Ego were quite unnecessary to the project. And then again, there are those dreams of unparalleled clarity which appear as kind of fortuitous circumstance.

When writers turn 80, there is a tendency to "let them off the hook" as artists. There is no need for that here. Burroughs' craft is as tightly wound as ever and retains his particular brand of humor. The difference between entertainment and edification becomes visible, though the latter, here, is no less enjoyable.