The Secret Of Roan Inish 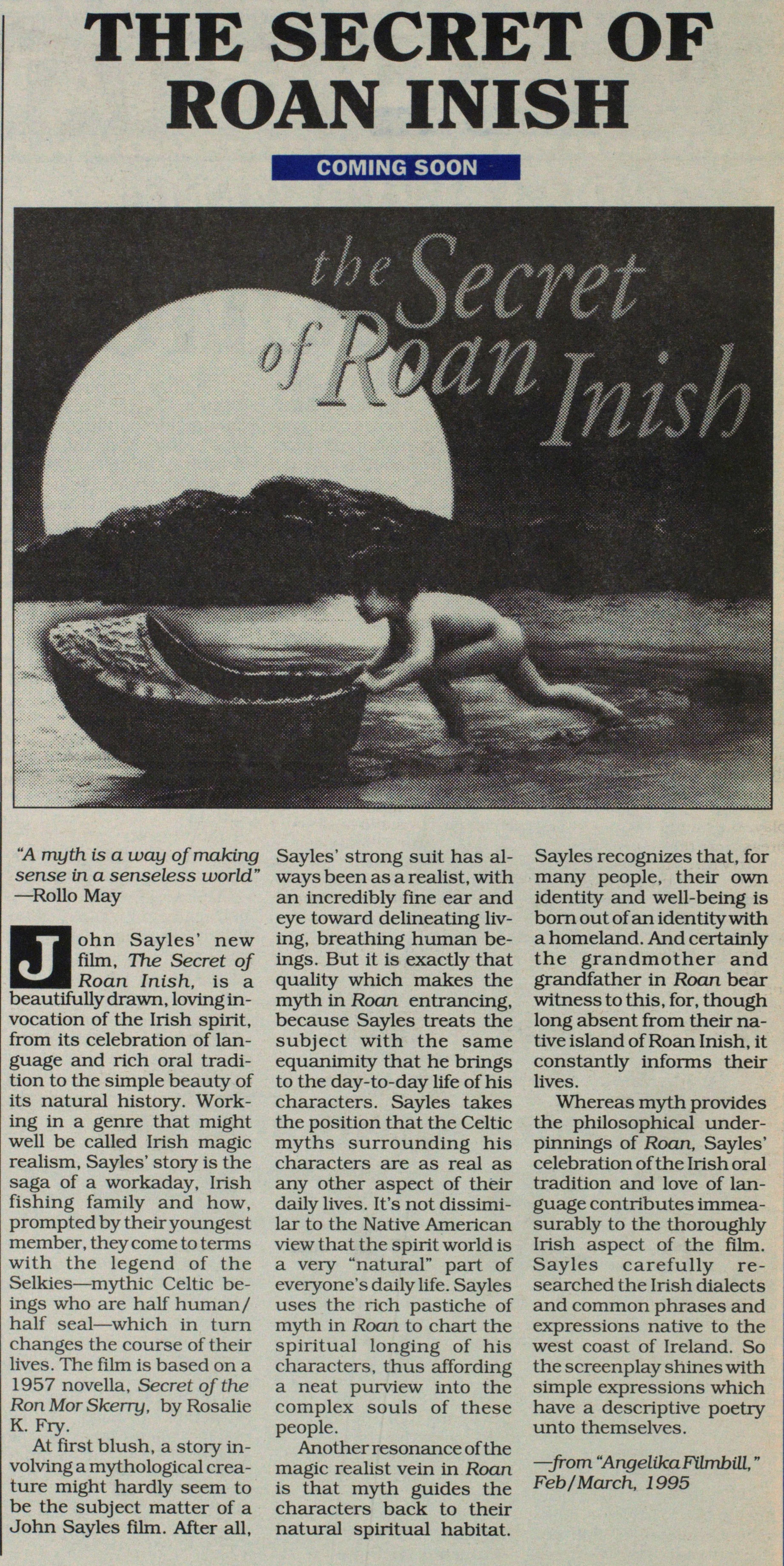 "A myth is a way of making sense in a senseless world" -Rollo May nohn Sayles' new film, The Secret of Roan Inish, is a beautifullydrawn, loving invocation of the Irish spirit, from its celebration of language and rich oral tradition to the simple beauty of its natural history. Working in a genre that might well be called Irish magie realism, Sayles' story is the saga of a workaday, Irish fishing family and how, prompted by their youngest member , they come to terms with the legend of the Selkies - mythic Celtic beings who are half human half seal - which in turn changes the course of their lives. The film is based on a 1957 novella. Secret of the Ron Mor Skerry, by Rosalie K. Fry. At first blush, a story involving a mythological creature might hardly seem to be the subject matter of a John Sayles film. After all. Sayles' strong suit has always been as a realist, with an incredibly fine ear and eye toward delineating living, breathing human beings. But it is exactly that quality which makes the myth in Roan entrancing, because Sayles treats the subject with the same equanimity that he brings to the day-to-day life of his characters. Sayles takes the position that the Celtic myths surrounding his characters are as real as any other aspect of their daily lives. It's not dissimilar to the Native American view that the spirit world is a very "natural" part of everyone's daily life. Sayles uses the rich pastiche of myth in Roan to chart the spiritual longing of his characters, thus affording a neat purview into the complex souls of these people. Another resonance of the magie realist vein in Roan is that myth guides the characters back to their natural spiritual habitat. Sayles recognizes that, for many people, their own identity and well-being is bom out of an identity with a homeland. And certainly the grandmother and grandfather in Roan bear witness to this, for, though long absent from their native island of Roan Inish, it constantly informs their lives. Whereas myth provides the philosophical underpinnings of Roan, Sayles' celebration of the Irish oral tradition and love of language contributes immeasurably to the thoroughly Irish aspect of the film. Sayles carefully researched the Irish dialects and common phrases and expressions native to the west coast of Ireland. So the screenplay shines with simple expressions which have a descriptive poetry unto themselves. -from "AngelikaFümbiü, " FebMarch, 1995