The Sum Of Us 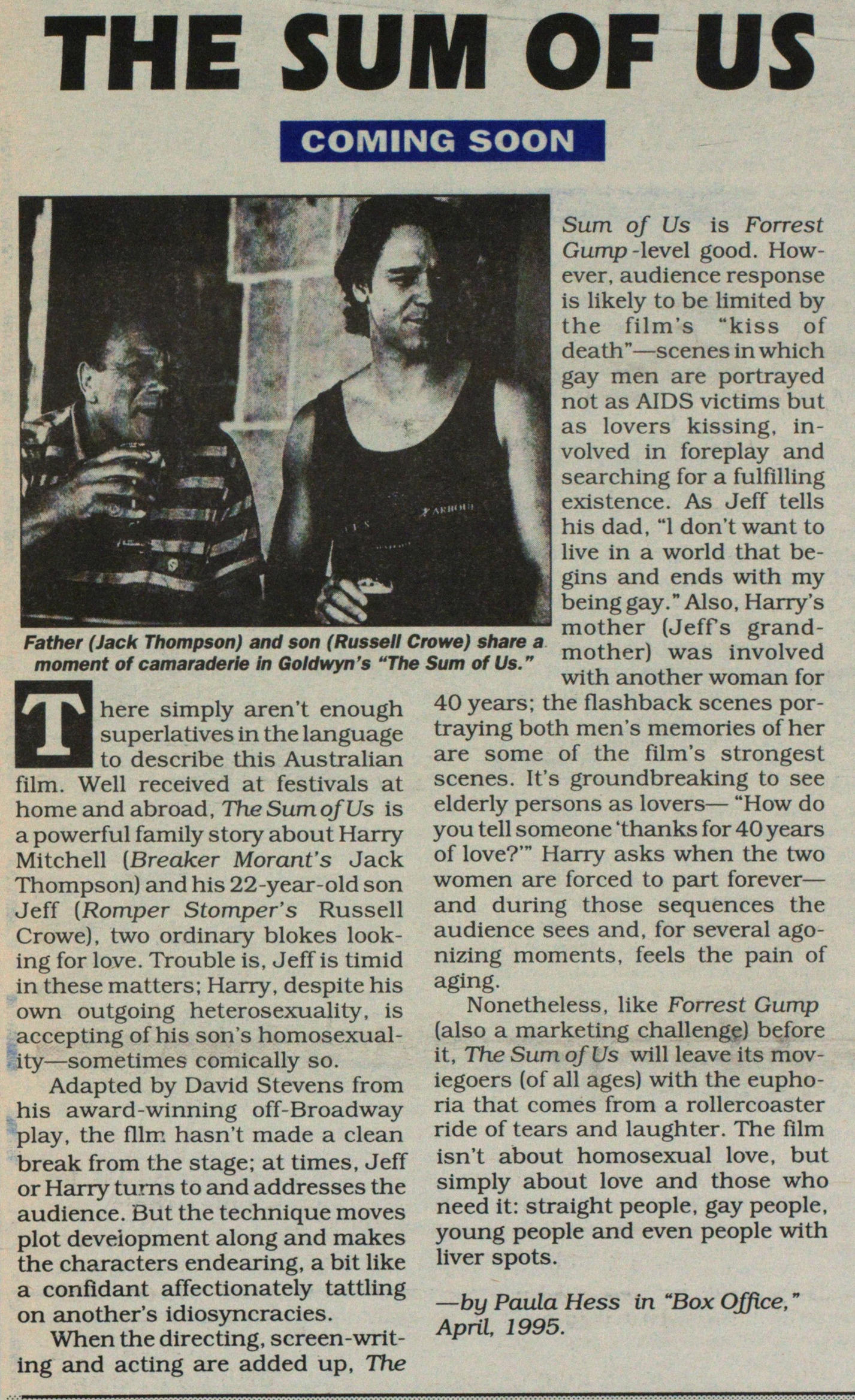 Hhere simply aren 't enough superlatives in the language to describe this Australian film. Well received at festivals at home and abroad, TheSumqfUs is a powerful family story about Harry Mitchell {Breaker Morant's Jack Thompson) and his 22-year-old son Jeff (Romper Stomper's Russell Crowe), two ordinary blokes looking for love. Trouble is, Jeff is timid in these matters; Harry, despite his own outgoing heterosexuality, is accepting of his son's homosexual - ity - sometimes comically so. Adapted by David Stevens from his award -winning off-Broadway play, the film hasn't made a clean break from the stage; at times, Jeff or Harry turns to and addresses the audience. But the technique moves plot deveiopment along and makes the characters endearing, a bit like a confïdant affectionately tattling on another's idiosyncracies. When the directing, screen-writing and acting are added up, The Sum of Us is Forrest Gump -level good. However, audience response is likely to be limited by the film's "kiss of death" - scènes in which gay men are portrayed not as AIDS victims but as lovers kissing, involved in foreplay and searching for a fulfïlling existence. As Jeff tells his dad, "1 don't want to live in a world that begins and ends with my beinggay." Also, Harry's mother (Jeffs grandmother) was involved with another woman for 40 years; the flashback scènes portraylng both men's memories of her are some of the film's strongest scènes. It's groundbreaking to see elderly persons as lovers - "How do you teil someone 'thanks for 40 years of love?'" Harry asks when the two women are forced to part forever - and during those sequences the audience sees and, for several agonizing moments, feels the pain of aging. Nonetheless, like Forrest Gump (also a marketing challenge) before it, The Sum qfUs will leave its moviegoers (of all ages) with the euphoria that comes from a rollercoaster ride of tears and laughter. The film isn't about homosexual love, but simply about love and those who need it: straight people, gay people, young people and even people with liver spots. - by Paula Hess in "Box Office, " April, 1995.