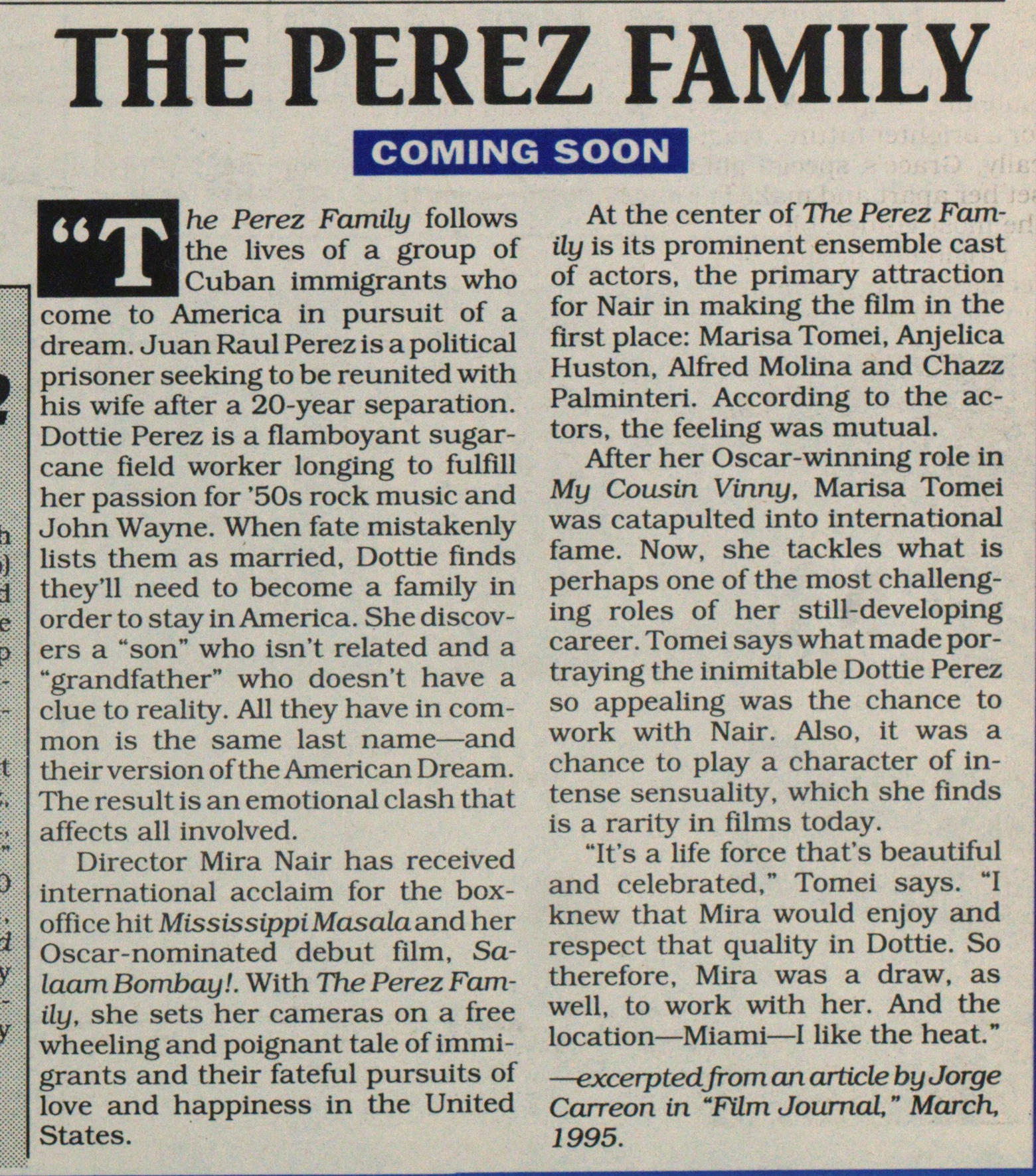 E he Pérez Family follows the lives of a group of Cuban immigrants who come to America in pursuit of a dream. Juan Raúl Pérez is a politlcal prisoner seeking to be reunited with his wlfe after a 20-year separatlon. Dottie Pérez is a flamboyant sugarcane field worker longing to fulfill her passion for '50s rock music and John Wayne. When fate mistakenly lists them as married, Dottie flnds they'll need to become a family in order to stay in America. She discovers a "son" who isn't related and a "grandfather" who doesn't have a clue to reality. All they have in common is the same last name - and theirversion of the American Dream. The result is an emotional clash that affects all involved. Director Mira Nair has received international acclaim for the boxoffice hit MississippiMasalaand her Oscar-nominated debut film, Salaam Bombay!. With The Perez Family, she sets her cameras on a free wheeling and poignant tale of immigrants and their fateful pursuits of love and happiness in the United States. At the center of The Perez Family is its prominent ensemble cast of actors, the primary attraction for Nair in making the fílm in the first place: Marisa Tomei, Anjelica Huston, Alfred Molina and Chazz Palminteri. According to the actors, the feeling was mutual. After her Oscar-winning role in My Cousin Vinny, Marisa Tomei was catapulted into international fame. Now, she tackles what is perhaps one of the most challenging roles of her still-developing career. Tomei says what made portraying the inimitable Dottie Perez so appealing was the chance to work with Nair. Also, it was a chance to play a character of intense sensuality, which she finds is a rarity in films today. "It's a Ufe forcé that's beautiful and celebrated," Tomei says. "I knew that Mira would enjoy and respect that quality in Dottie. So therefore, Mira was a draw, as well, to work with her. And the location - Miami - I like the heat." - excerptedjrom an article by Jorge Carreon in "Film Journal " March, 1995.