Top Of The Park 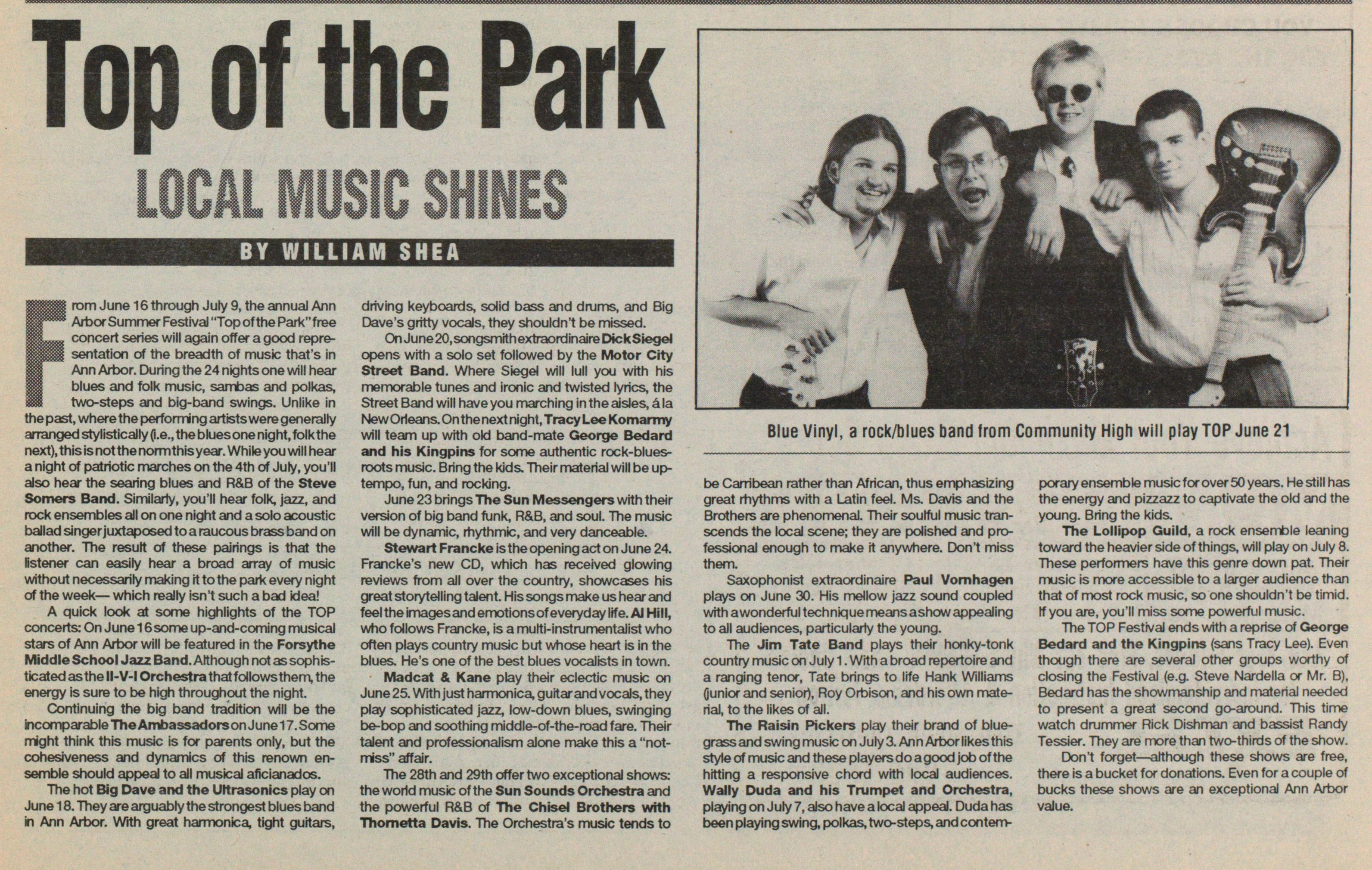 F rom June 16 through July 9, the annual Ann ArborSummer Festival "Top of the Park"free concert series will again offer a good representation of the breadth of music that's in Ann Arbor. During the 24 nights one will hear blues and folk music, sambas and polkas, two-steps and big-band swings. Unlike in the past, wherethe perforrningartists were generally anangedstylistically(i.e.,thebkjesonenight,folkthe next), this is not the normthisyear. While you will hear a night of patriotic marches on the 4th of July, you'll also hear the searing blues and R&B of the Steve Somers Band. Similariy, you'll hear folk, jazz, and rock ensembles all on one night and a solo acoustic bailad singer juxtaposed to a raucous brass band on another. The resutt of these pairings is that the istener can easily hear a broad array of music without necessarily making rt tothe park every night of the week - which really isn't such a bad dea! A quick look at some highlights of the TOP concerts: On June 1 6some up-and-coming musical stars of Ann Arbor will be featured in the Forsythe Middle School Jazz Band. Although not as sophisticated as the ll-V-l Orchestra that f ollows them, the energy is sure to be high throughout the night. Continuing the big band tradition will be the incomparable The Ambassadors on June 17. Some rright think this music is for parents only, but the cohesiveness and dynamics of this renown ensemble should appeal to all musical aficianados. The hot Big Dave and the Urtrasonics play on June 1 8. They are arguably the strongest blues band in Ann Arbor. Wrth great harmonica, tight guitars, driving keyboards, solid bass and drums, and Big Dave's gritty vocals, they shouldn't be missed. On June 20, songsmith extraordinaire DickSiegel opens with a solo set followed by the Motor City Street Band. Where Siegei will lul! you with his memorable tunes and ironie and twisted lyrics, the Street Band will have you marching in the aisles, á la New Orleans. On the next night, Tracy Lee Komarmy will team up with okJ band-mate George Bedard and his Kingpins for some authentic rock-bluesroots music. Bring the kids. Their material will be uptempo, fun, and rocking. June 23 brings The Sun Messengers with their version of big band funk, R&B, and soul. The music will be dynamic, rhythmic, and very danceable. Stewart Francke is the opening act on June 24. Francke's new CD, which has received glowing reviews from all over the country, showcases his great storytelling talent. His songs make us hear and feel the imagesand emotions of everyday life. Al Hill, who follows Francke, is a multi-instrumentalist who often plays country music but whose heart is in the blues. He's one of the best blues vocalists in town. Madcat & Kane play their eclectic music on June 25. With just harmonica, guit ar and vocals, they play sophisticated jazz, low-down blues, swinging be-bop and soothing middle-of-the-road fare. Their talent and professkxialism alone make this a "notniss" affair. The 28th and 29th offer two exceptional shows: the worid music of the Sun Sounds Orchestra and the powerful R&B of The Chisel Brothers with Thometta Davis. The Orchestra's music tends to be Carribean rather than African, thus emphasizing great rtiythms with a Latín feel. Ms. Davis and the Brothers are phenomenal. Their sourful music transcends the local scene; they are polished and professional enough to make tt anywhere. Don't miss them. Saxophonist extraordinaire Paul Vomhagen plays on June 30. His mellow jazz sound coupled withawonderfultechniquemeansashowappealing to all audiences, particularty the young. The Jim Tate Band plays their honky-tonk country music on July 1 . With a broad repertoire and a ranging tenor, Tate brings to Irfe Hank Williams (unior and senior), Roy Orbison, and his own material, to the likes of all. The Raisin Pickers play their brand of bluegrass and swing music on July 3. Ann Arbor likes this styte of music and these players do a good job of the hitting a responsive chord with local audiences. Wally Duda and his Trompet and Orchestra, playing on July 7, also have a local appeal. Duda has been playing swing, polkas, steps, and porary ensemble music for over 50 years. He stítt has the energy and pizzazz to captivate the old and the young. Bring the kids. The Lollipop Guild, a rock ensemble leaning toward the heavier side of things, will play on July 8. These performers have this genre down pat. Their music is more accessible to a larger audience than that of most rock music, so one shouldn't be timid. tf you are, you'll miss some powerful music. The TOP Festival ends with a reprise of George Bedard and the Kingpins (sans Tracy Lee). Even though there are several other groups worthy of closing the Festival (e.g. Steve Nardella or Mr. B), Bedard has the showmanship and material needed to present a great second gc-around. This time watch drummer Riek Dishman and bassist Randy Tessier. They are more than two-thirds of the show. Don't forget - although these shows are free, there is a bucket for donations. Even for a couple of bucks these shows are an exceptional Ann Arbor value.