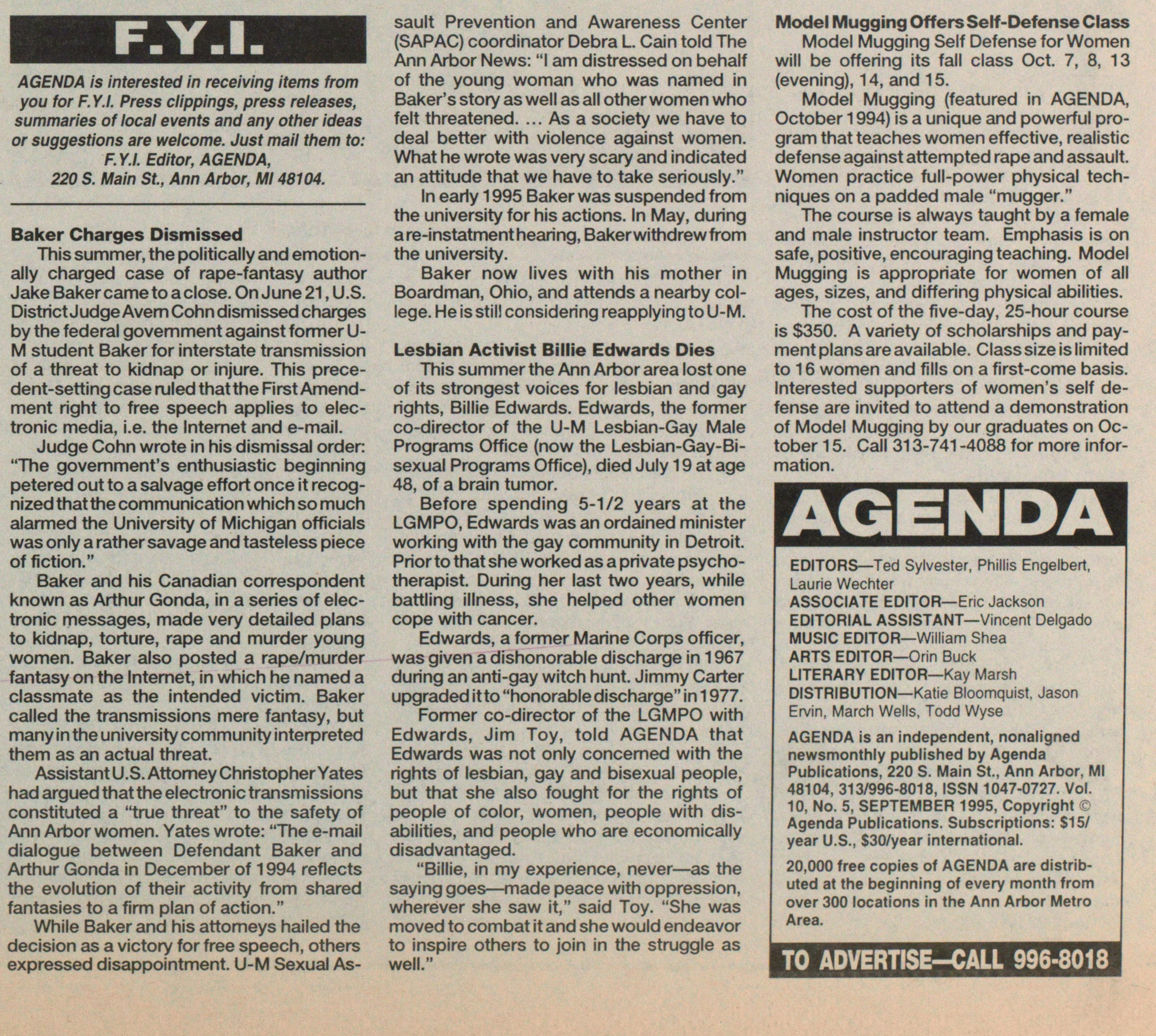 AGENDA is interested in receiving items f rom you for F.Y.I. Press clippings, press releases, summaries of local events and any other ideas or suggestions are welcome. Just mail them to: F.Y.I. Editor, AGENDA, 220 S. Main St, Ann Arbor, MI 48104. Baker Charges Dismissed This summer, the politically and emotionally charged case of rape-fantasy author Jake Baker carne to a close. On June 21 , U.S. District JudgeAvemCohn dismissed charges by the federal government against former UM student Baker for interstate transmission of a threat to kidnap or injure. This precedent-setting case ruled thatthe First Amendment right to free speech applies to electronic media, i.e. the Internet and e-mail. Judge Cohn wrote in his dismissal order: "The govemment's enthusiastic beginning petered out to a salvage effort once it recognized that the communication which so much alarmed the University of Michigan officials was only a rather savage and tasteless piece of fiction." Baker and his Canadian correspondent known as Arthur Gonda, in a series of electronic messages, made very detailed plans to kidnap, torture, rape and murder young women. Baker also posted a rapemurder fantasy on the Internet, in which he named a classmate as the intended victim. Baker called the transmissions mere fantasy, but many in the university community interpreted them as an actual threat. Assistant U.S. Attomey Christopher Yates had argued that the electronic transmissions constituted a "true threat" to the safety of Ann Arbor women. Yates wrote: "The e-mail dialogue between Defendant Baker and Arthur Gonda in December of 1 994 reflects the evolution of their activity from shared fantasies to a firm plan of action." While Baker and his attomeys hailed the decisión as a victory for free speech, others expressed disappointment. U-M Sexual sault Prevention and Awareness Center (SAPAC) coördinator Debra L. Cain told The Ann Arbor News: "I am distressed on behalf of the young woman who was named in Baker's story as well as all other women who feit threatened. ... As a society we have to deal better with violence against women. What he wrote was very scary and indicated an attitude that we have to take seriously." In early 1 995 Baker was suspended from the university for his actions. In May, during a re-instatment hearing, Baker withdrew from the university. Baker now lives with his mother in Boardman, Ohio, and attends a nearby college. He is still considering reapplying to U-M. Lesbian Activist Billie Edwards Dies This summer the Ann Arbor area lost one of its strongest voices for lesbian and gay rights, Billie Edwards. Edwards, the former co-director of the U-M Lesbian-Gay Male Programs Office (now the Lesbian-Gay-Bisexual Programs Office), died July 1 9 at age 48, of a brain tumor. Before spending 5-12 years at the LGMPO, Edwards was an ordained minister working with the gay community in Detroit. Prior to that she worked as a private psychotherapist. During her last two years, while battling illness, she helped other women cope with cáncer. Edwards, a former Marine Corps officer, was given a dishonorable discharge in 1 967 during an anti-gay witch hunt. Jimmy Carter upgraded itto "honorable discharge" in 1 977. Former co-director of the LGMPO with Edwards, Jim Toy, told AGENDA that Edwards was not only concemed with the rights of lesbian, gay and bisexual people, but that she also fought for the rights of people of color, women, people with disabilities, and people who are economically disadvantaged. "Billie, in my experience, never - as the saying goes - made peace with oppression, wherever she saw it," said Toy. "She was moved to combat it and she would endeavor to inspire others to join in the struggle as well." Model Mugging Offers Self-Defense Class Model Mugging Self Defense for Women will be offering its fall class Oct. 7, 8, 13 (evening), 1 4, and 1 5. Model Mugging (featured in AGENDA, October 1 994) is a unique and powerful program that teaches women effective, realistic defense against attempted rape and assault. Women practice full-power physical techniques on a padded male "mugger." The course is always taught by a female and male instructor team. Emphasis is on safe, positive, encouraging teaching. Model Mugging is appropriate for women of all ages, sizes, and differing physical abilities. The cost of the five-day, 25-hour course is $350. A variety of scholarships and payment plans are available. Class size is limited to 1 6 women and filis on a first-come basis. Interested supporters of women's self defense are invited to attend a demonstration of Model Mugging by our graduates on October 1 5. Cali 31 3-741 -4088 for more information.