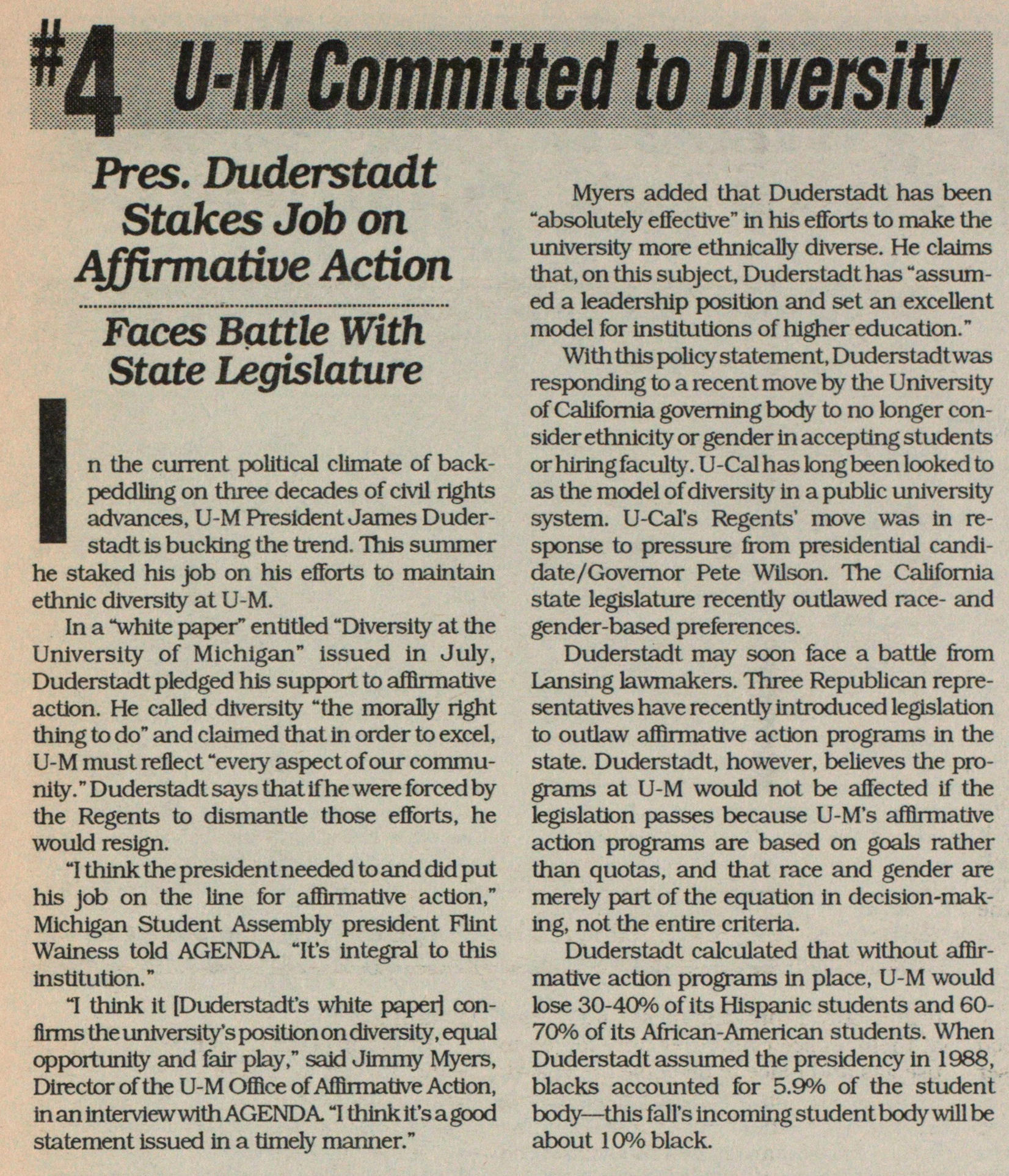 In the current political cllmate of backpeddling on three decades of civil rights advances, U-M President James Duderstadt is bucktng the trend. This summer he staked his job on his efforts to maintain ethnic diversity at U-M. In a "white paper" enütled "Diversity at the University of Michigan" issued in July, Duderstadt pledged his support to afflrmative action. He called dtversity "the morally right thing to do" and claimed that in order to excel, U-M must reflect "every aspect of our community . " Duderstadt says that if he were forced by the Regents to dismantle those efforts, he would resign. "I think the president needed to and did put his job on the line for affirmative action," Michigan Student Assembly president FTint Wainess told AGENDA "lts integral to this insütution." "I think it [Duderstadt's white paper] conflrms the university's position on diversity, equal opportunity and fair play," said Jimmy Myers, Director of the U-M Office of Afflrmative Action, inanlnteniewwlthAGENDA "I thinkit'sagood statement issued in a ttmely manner." Myers added that Duderstadt has been "absolutely effecüve" in hls efforts to make the university more ethnically diverse. He claims that, on this subject, Duderstadt has "assumed a leadership position and set an excellent model for institutions of higher education." With this policy statement, Duderstadtwas responding to a recent move by the University of California goveming body to no longer consider ethnicity or gender in accepting students or hiring faculty . U-Cal has long been looked to as the model of diversity in a public university system. U-Cal's Regents' move was in response to pressure from presidential candidateGovemor Pete Wilson. The California state legislature recently outlawed and gender-based preferences. Duderstadt may soon face a battle from Lansing lawmakers. Three Republican representatives have recently introduced legislation to outlaw affirmative action programs in the state. Duderstadt, however, believes the programs at U-M would not be affected if the legislation passes because U-M's afflrmative action programs are based on goals rather than quotas, and that race and gender are merely part of the equation in decision-making, not the entire criteria. Duderstadt calculated that without affirmattve action programs in place, U-M would tose 30-40% of its Hispanic students and 6070% of its African-American students. When Duderstadt assumed the presidency in 1988, blacks accounted for 5.9% of the student body - this fall's incoming student body will be about 10% black.