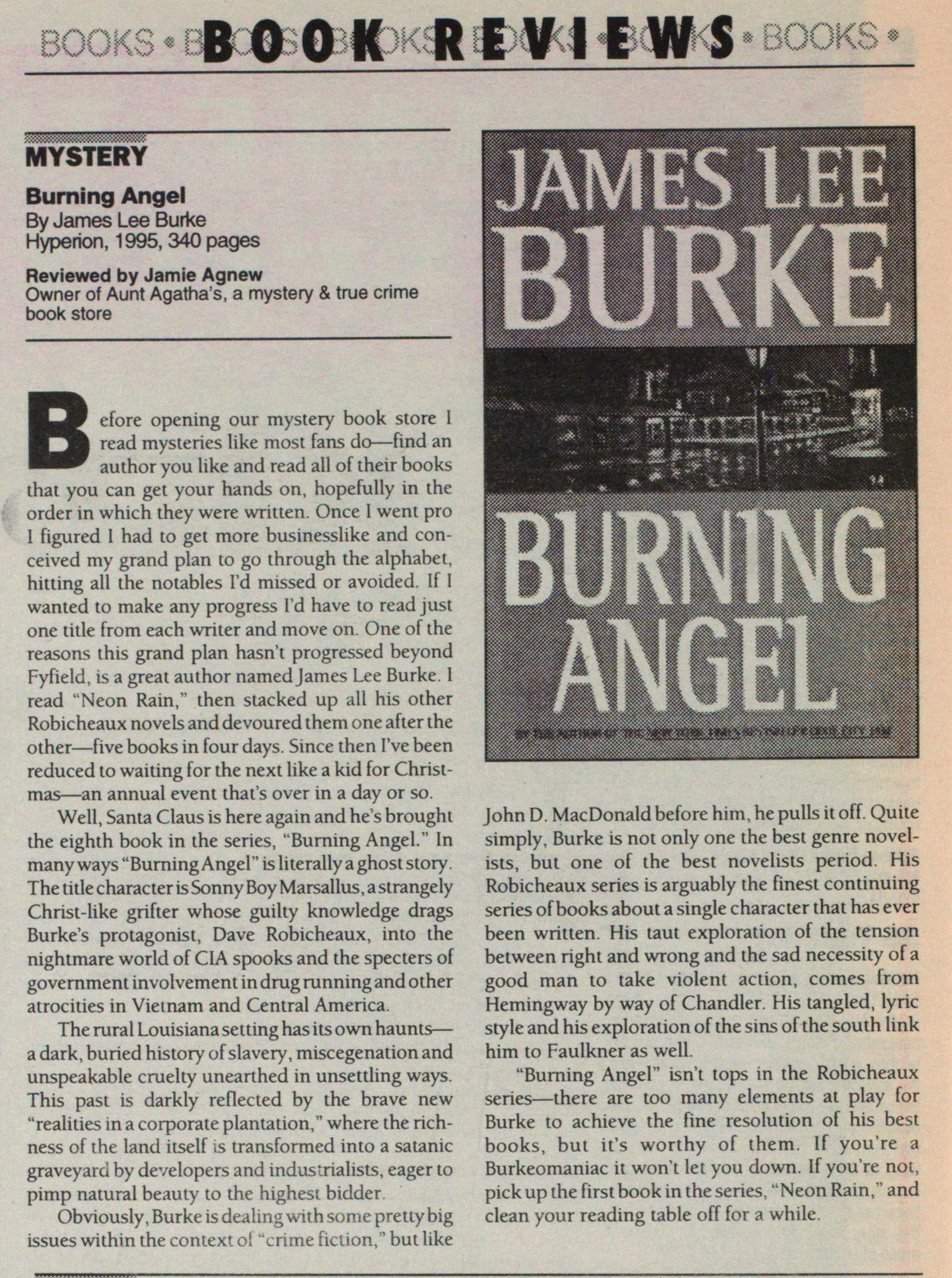 Burning Angel By James Lee Burke Hyperion, 1995, 340 pages Owner of Aunt Agatha's, a mystery & true crime book store Before opening our mystery book store 1 read mysteries like most fans do - find an author you like and read all of their books that you can get your hands on, hopefully in the order in which they were written. Once I went pro 1 figured 1 had to get more businesslike and conceived my grand plan to go through the alphabet, hitting all the notables I'd missed or avoided. If I wanted to make any progress I'd have to read just one title from each writer and move on. One of the reasons this grand plan hasn't progressed beyond Fyfield, is a great author named James Lee Burke. 1 read "Neon Rain," then stacked up all his other Robicheaux novéis and devoured them one after the other - five books in four days. Since then l've been reduced to waiting for the next like a kid for Christmas - an annual event that's over in a day or so. Well, Santa Claus is here again and hes brought the eighth book in the series, "Buming Angel." In many ways "Burning Angel" is literally a ghost story. The title character is Sonny Boy Marsallus, a strangely Christ-like grifter whose guilty knowledge drags Burke's protagonist, Dave Robicheaux, into the nightmare world of CIA spooks and the specters of government involvement in drug running and other atrocities in Vietnam and Central America. The rural Louisiana setting has its own haunts - a dark, buried history of slavery, miscegenation and unspeakable cruelty unearthed in unsettling ways. This past is darkly reflected by the brave new "realities in a corporate plantation," where the richness of the land itself is transformed into a satanic graveyard by developers and industrialists, eager to pimp natural beauty to the highest bidder Obviously , Burke is dealing with some pretly big issues within the context oi "crime ficüon," but like John D. MacDonald before him, he pulls it off. Quite simply, Burke is not only one the best genre novelists, but one of the best novelists period. His Robicheaux series is arguably the finest continuing series of books about a single character that has ever been written. His taut exploration of the tensión between right and wrong and the sad necessity of a good man to take violent action, comes from Hemingway by way of Chandler. His tangled, lyric style and his exploration of the sins of the south link him to Faulkner as well. "Buming Angel" isn't tops in the Robicheaux series - there are too many elements at play for Burke to achieve the fine resolution of his best books, but it's worthy of them. If you're a Burkeomaniac it won't let you down. If you're not, piek up the first book in the series, "Neon Rain , " and clean your reading table off for a while.