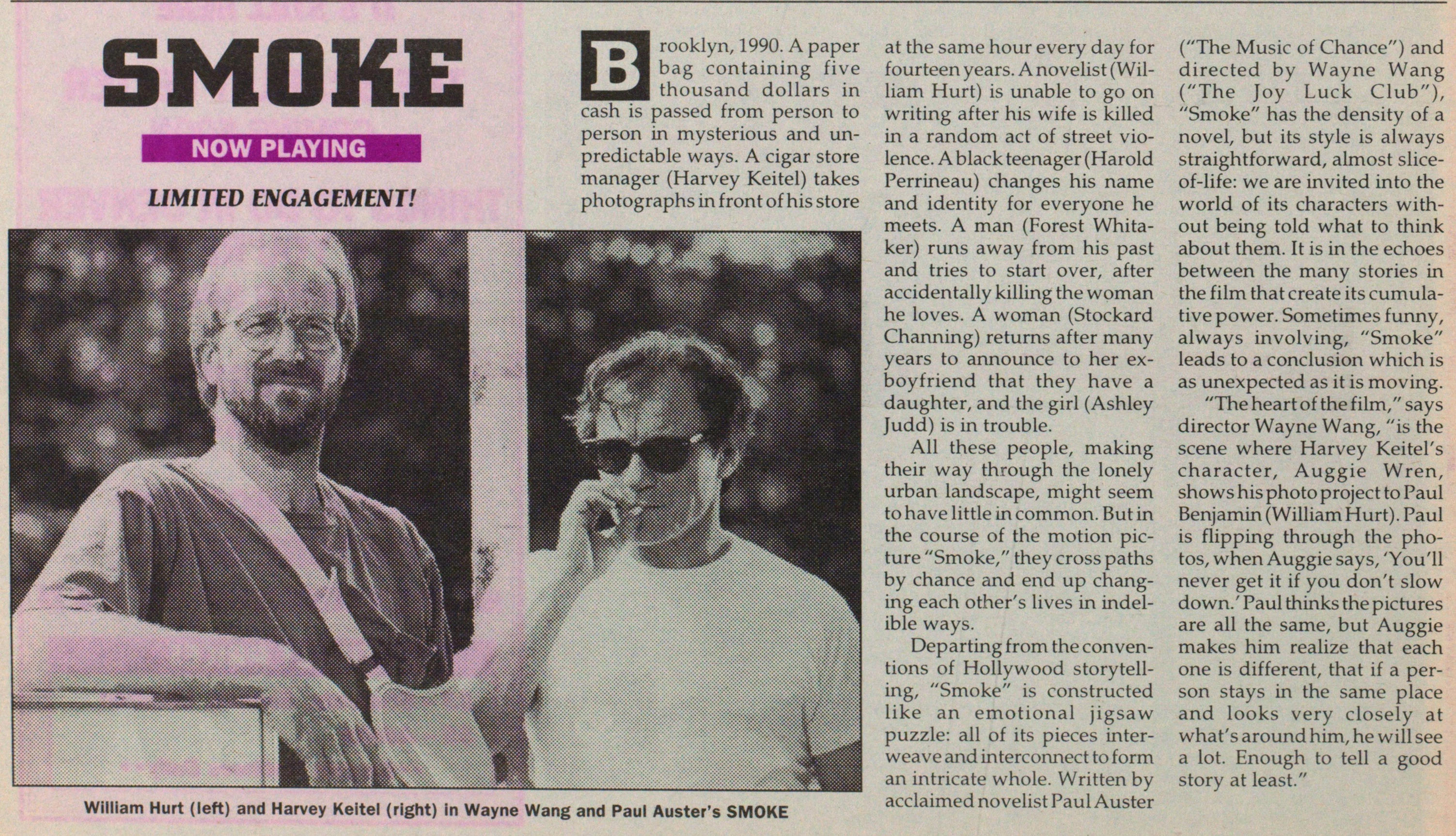 mrooklyn, 1990. A paper bag containing five thousand dollars in cash is passed from person to person in mysterious and unpredictable ways. A cigar store manager (Harvey Keitel) takes photographs in front of his store at the same hour every day for fourteen years. A novelist (William Hurt) is unable to go on writing after his wife is killed in a random act of street violence. A black teenager (Harold Perrineau) changes his name and identity for everyone he meets. A man (Forest Whitaker) runs away from his past and tries to start over, after accidentally killing the woman he loves. A woman (Stockard Channing) returns after many years to announce to her exboyfriend that they have a daughter, and the girl (Ashley Judd) is in trouble. All these people, making their way through the lonely urban landscape, might seem to have little in common. But in the course of the motion picture "Smoke," they cross paths by chance and end up changing each other's lives in indelible ways. Departing from the conventions of Hollywood storytelling, "Smoke" is constructed like an emotional jigsaw puzzle: all of its pieces interweave and interconnect to f orm an intricate whole. Written by acclaimed novelist Paul Auster ("The Music of Chance") and directed by Wayne Wang ("The Joy Luck Club"), "Smoke" has the density of a novel, but its style is always straightforward, almost sliceof-life: we are invited into the world of its characters without being told what to think about them. It is in the echoes between the many stories in the film that créate its cumulative power. Sometimes funny, always involving, "Smoke" leads to a conclusión which is as unexpected as it is moving. "The heart of the film," says director Wayne Wang, "is the scène where Harvey Keitel's character, Auggie Wren, shows his photo project to Paul Benjamin (WilliamHurt). Paul is flipping through the photos, when Auggie says, 'You'll never get it if you don't slow down.' Paul thinks the pictures are all the same, but Auggie makes him realize that each one is different, that if a person stays in the same place and looks very closely at what's around him, he will see a lot. Enough to teil a good story at least."