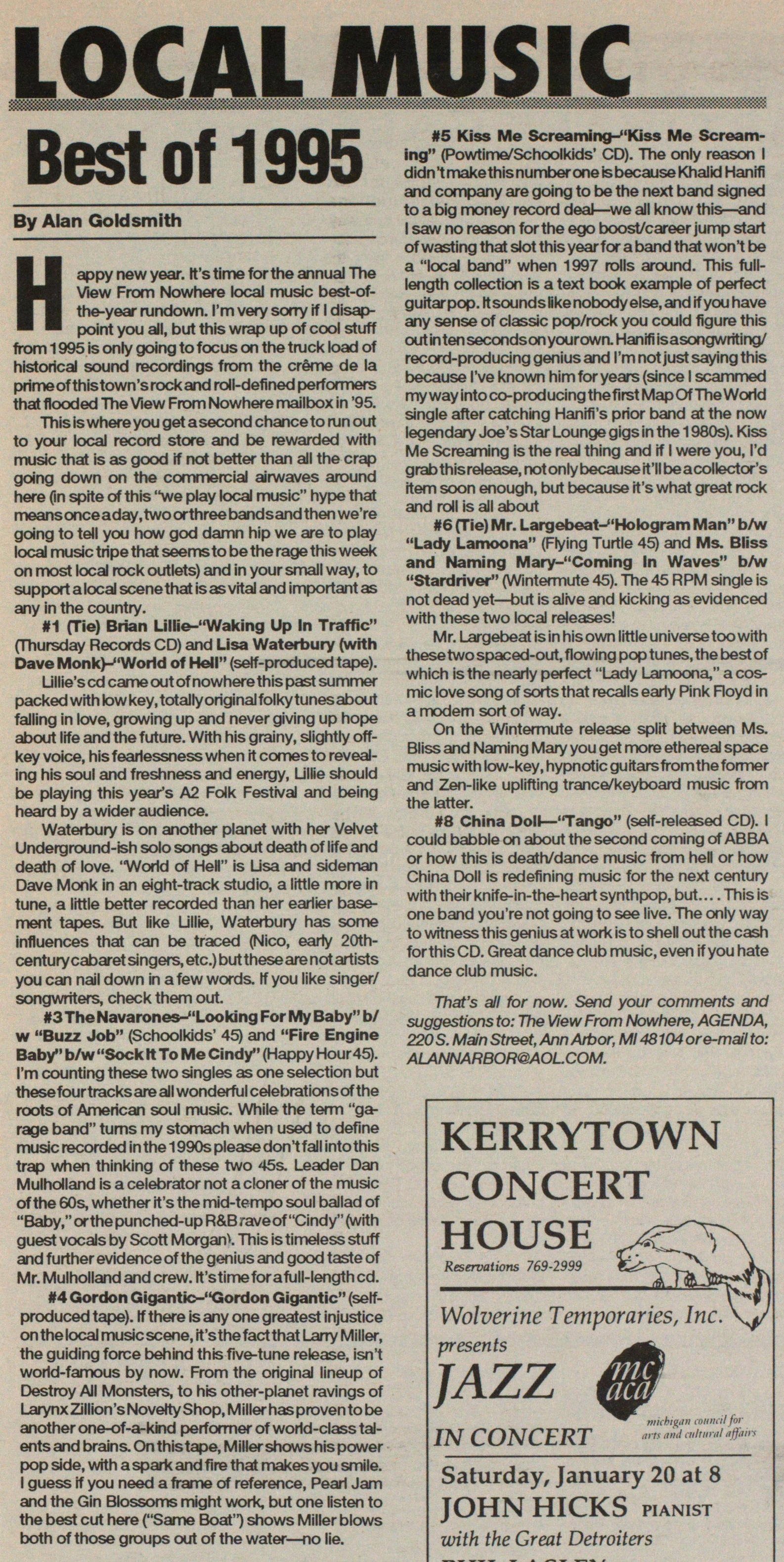 Happy new year. ft's time for the annual The View From Nowhere local music best-ofthe-year rundown, l'm very sorry if I disappoint you all, but this wrap up of cool stuff from 1 995 is only going to focus on the truck load of historical sound recordings from the crème de la primeof thistown'srockand roli-defined performers that flooded The View From Nowhere mailbox in '95. This is where you get a second chance to run out to your local record store and be rewarded with music that is as good if not better than all the crap going down on the commercial airwaves around here (in spite of this "we play local music" hype that meansonceaday.twoorthree bandsand thenwe're going to teil you how god damn hip we are to play local music tripe that seems to be the rage this week on most local rock outlets) and in your small way, to support a local scène that is as vital and important as any in the country. #1 (Tie) Brian Lillie-"Waking Up In Traffic" (Thursday Records CD) and Lisa Waterfoury (with Dave MonkH'Worid of Heil" (self-produced tape). Lillie's cd came out of nowhere this past summer packed with low key, totally original folky tunes about falling in love, growing up and never giving up hope about life and the future. With his grainy, slightly offkey voice, his feariessness when it comes to revealing his soul and f reshness and energy, LJIlie should be playing this year's A2 Folk Festival and being heard by a wider audience. Waterbury is on another planet with her Velvet Underground-ish solo songs about death of life and death of love. "World of HeN" is Lisa and sideman Dave Monk in an eight-track studio, a little more in tune, a little better recorded than her eariier basement tapes. But like LJIlie, Waterbury has some influences that can be traced (Nico, early 2Othcentury cabaret singers, etc.) but these are not artists you can nail down in a few words. If you like singer songwriters, check them out. #3 The Navarones-"Loo king For My Baby" b w "Buzz Job" (Schoolkids' 45) and "Fire Engine Baby" bw "Sock It To Me Cindy" (Happy Hour45). l'm counting these two singles as one selection but these fourtracks are all wonderfulcelebrationsof the roots of American soul music. While the term "garage band" tums my stomach when used to define music recorded in the 1 990s please don 't f all into this trap when thinking of these two 45s. Leader Dan Mulholland is a celebrator not a cloner of the music of the 60s, whether it's the mid-tempo soul bailad of "Baby," orthe punched-up R&Braveof "Cindy" (wrth guest vocals by Scott Morgan This is timeless stuff and f urther evidence of the genius and good taste of Mr. Mulholland and crew. It'stimeforafull-lengthcd. #4 Gordon Gigantic-"Gordon Gigantic" (selfproduced tape). If t here is any one greatest injustice on the local music scène, it'sthefactthat Larry Miller, the guiding force behind this five-tune release, isn't worid-famous by now. From the original lineup of Destroy All Monsters, to his other-planet ravings of Larynx Zillion 's Novetty Shop, Miller has proven to be another one-of-a-kind performer of worid-classtalents and brains. On this tape, M lier shows his power pop side, with a spark and fire that makes you smile. I guess if you need a frame of reference, Pearl Jam and the Gin Blossoms might work, but one listen to the best cut here ("Same Boat") shows Miller blows both of those groups out of the water - no lie. #5 Kiss Me Screaming-"Kiss Me Screaming" (PowtimeSchoolkids' CD). The only reason I didn'tmakethisnumberoneisbecauseKhalkiHanifi and company are going to be the next band signed to a big money record deal - we all know this - and I saw no reason forthe ego boostcareer jump start of wast i ng t nat slot th is year f or a band that won 't be a "local band" when 1997 rolls around. This fulllength collection is a text book example of perfect guit ar pop. It sounds Bke nobody else, and if you have any sense of classic poprock you could figure this out intensecondsonyourown. Han ifiisasongw riting record-producing genius and l'm not just saying this because l've known him for years (since I scammed my way into co-prod ucing the first Map Of The World single after catching Hanifi's prior band at the now legendary Joe's Star Lounge gigs in the 1 980s). Kiss Me Screaming is the real thing and if I were you, l'd grabthisrelease, not only because it'llbeacollector's item soon enough, but because it 's what great rock and roll is all about 6 (Tie) Mr. Largebeat-"Hokgram Man" bw "Lady Lamoona" (Flying Turtle 45) and Ms. Bliss and Naming Mary-"Coming In Waves" bAv "Stardriver" (Wintemnute 45). The 45 RPM single is not dead yet - but is alive and kicking as evidenced with these two local releases! Mr. Largebeat is in his own little universe too with these two spaced-out, flowing pop tunes, the best of which is the nearly perfect "Lady Lamoona," a cosmic love song of sorts that recalls early Pink Floyd in a modem sort of way. On the Wintemnute release split between Ms. Bliss and Naming Mary you get more ethereal space music with low-key,hypnoticguitarsfrom the former and Zen-like uplifting trancekeyboard music from the latter. #8 China Doll- 'Tango" (self-released CD). I could babble on about the second coming of ABBA or how this is deathdance music from heil or how China Doll is redefining music for the next century with their knife-in-the-heart synthpop, but. ... This is one band you're not going to see live. The only way to witness this genius at work is to shell out the cash for this CD. Great dance club music, even if you hate dance club music. That 's all for now. Send your comments and suggestions to: The View From Nowhere, AGENDA, 220S. Man Street, AnnArtor, MI48104ore-mailto: ALANNARBOR@AOL.COM.