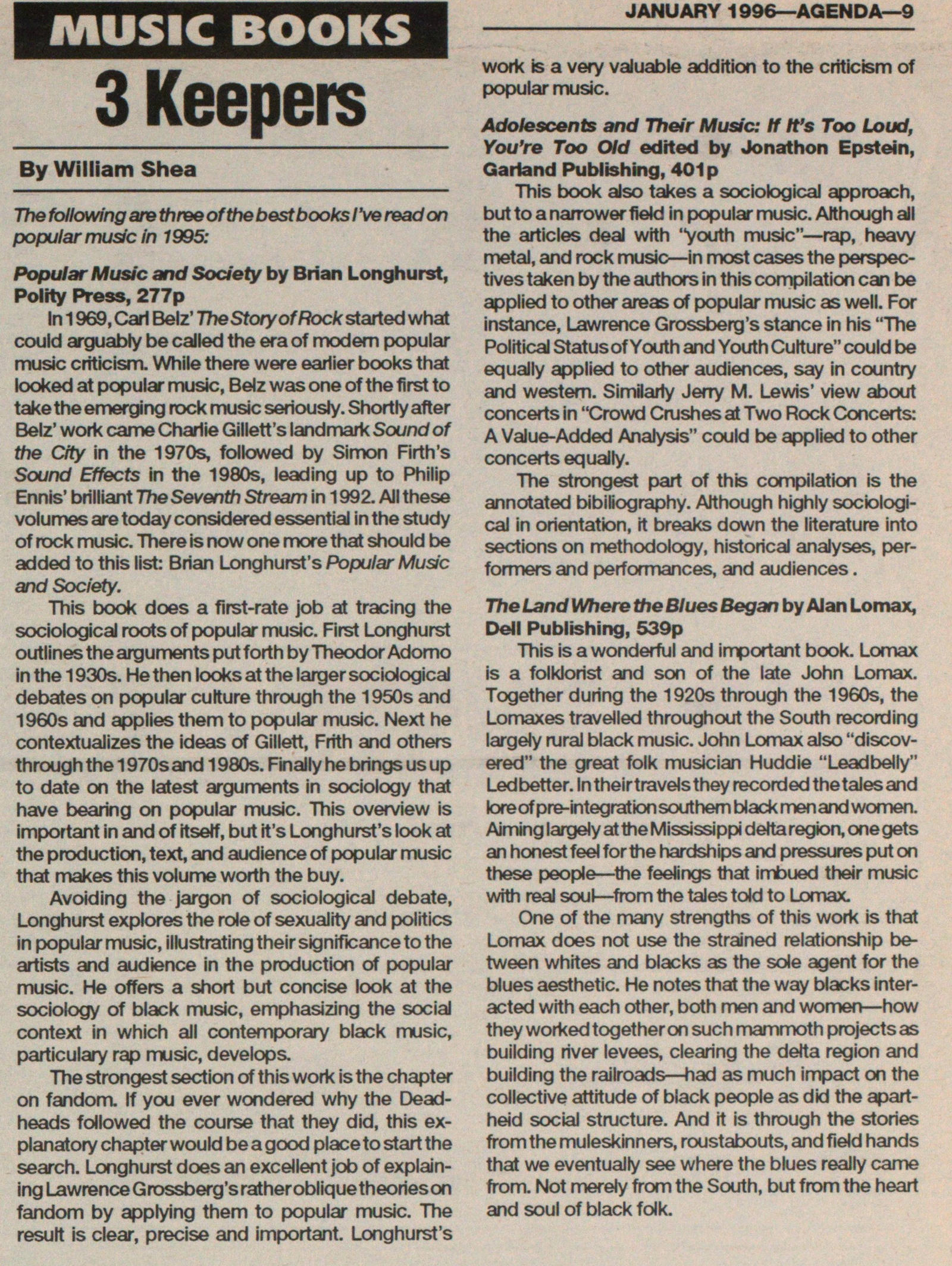 ThGfollowing arethreeof the best booksl've readon popular mus'c in 1995: Popular Music and Society by Brian Longhurst, Polrty Press, 277p In 1 969, Cari Belz' 77 StoryofRock started what couid arguably be called the era of modem popular music criticism. While there were earlier books that looked at popular music, Belz was one of the first to take the emerging rock music seriously. Shortly aft er Belz' work carne Charlie Gillett 's landmark Sound of the City in the 1970s, followed by Simon Firth's Sound Effécts in the 1980s, leading up to Philip Ennis' brilliant 77ie Seventh Stream in 1 992. All these volumes are today considered essential in the study of rock music. There is now one more that should be added to this list: Brian Longhurst's Popular Music and Society. This book does a first-rate job at tracing the sociológica! roots of popular music. First Longhurst outlines the arguments put f orth by Theodor Adorno in the 1 930s. He then looks at the larger sociological debates on popular culture through the 1 950s and 1960s and applies them to popular music. Next he contextualizes the ideas of Gillett, Frith and others through the 1 970s and 1 980s. Finally he brings us up to date on the latest arguments in sociology that have bearing on popular music. This overview is important in and of itserf, but it's Longhurst's look at the production, text, and audience of popular music that makes this volume worth the buy. Avoiding the jargon of sociological debate, Longhurst explores the role of sexuality and politics in popular music, illustrating their significance to the artists and audience in the production of popular music. He offers a short but concise look at the sociology of black music, emphasizing the social context in which all contemporary black music, particulary rap music, develops. The strongest section of this work is the chapter on fandom. If you ever wondered why the Deadheads followed the course that they did, this explanatory chapter would beagood place to start the search. Longhurst does an excellent job of explainingLawrenceGrossberg'sratherobliquetheorieson fandom by applying them to popular music. The result is clear, precise and important. Longhurst's work ís a very valuable addition to the criticism of popular music. Adolescente and Their Music: If tt's Too Loud, You're Too Oíd edited by Jonathon Epstein, Garland Publishing, 401 p This book also takes a sociological approach, but to a narro wer field in popular music. Atthough all the articles deal with "youth music" - rap, heavy metal, and rock music - n most cases the perspect ives taken by the authors in this compilation can be applied to other areas of popular music as well. For nstance, Lawrence Grossberg's stance in his "The Political Statusof Youth and Youth Culture" could be equally applied to other audiences, say in country and western. Similarty Jerry M. Lewis' view about concerts in "Crowd Crushes at Two Rock Concerts: A Value-Added Analysis" could be applied to other concerts equally. The strongest part of this compilation is the annotated bibiliography. Although highly sociological in orientatbn, it breaks down the literatura into sections on methodology, historica! analyses, performers and performances, and audiences . The Land Where the Blues Began by Alan Lomax, Dell Publishing, 539p This is a wonderful and important book. Lomax is a folklorist and son of the late John Lomax. Together during the 1920s through the 1960s, the Lomaxes travelled throughout the South recording largely rural black music. John Lomax also "discovered" the great folk musician Huddie "Leadbelly" Led better. In theirtraveisthey record ed the tales and lore of pre-integrationsouthem black men and women. Aiming largely at the Mississippi detta región, one gets an honest feel for the hardships and pressures put on these people - the feeJings that imbued their music with real soul- from the tales told to Lomax. One of the many strengths of this work is that Lomax does not use the strained relationship between whites and blacks as the sole agent for the blues aesthetic. He notes that the way blacks interacted with each other, both men and women - how they worked together on such mammoth projects as building river levees, clearing the delta región and building the railroads - had as much impact on the collective attitude of black people as did the apartheid social structure. And it is through the stories from the muleskinners, roustabouts, and field hands that we eventually see where the blues really carne from. Not merely from the South, but from the heart and soul of black folk.