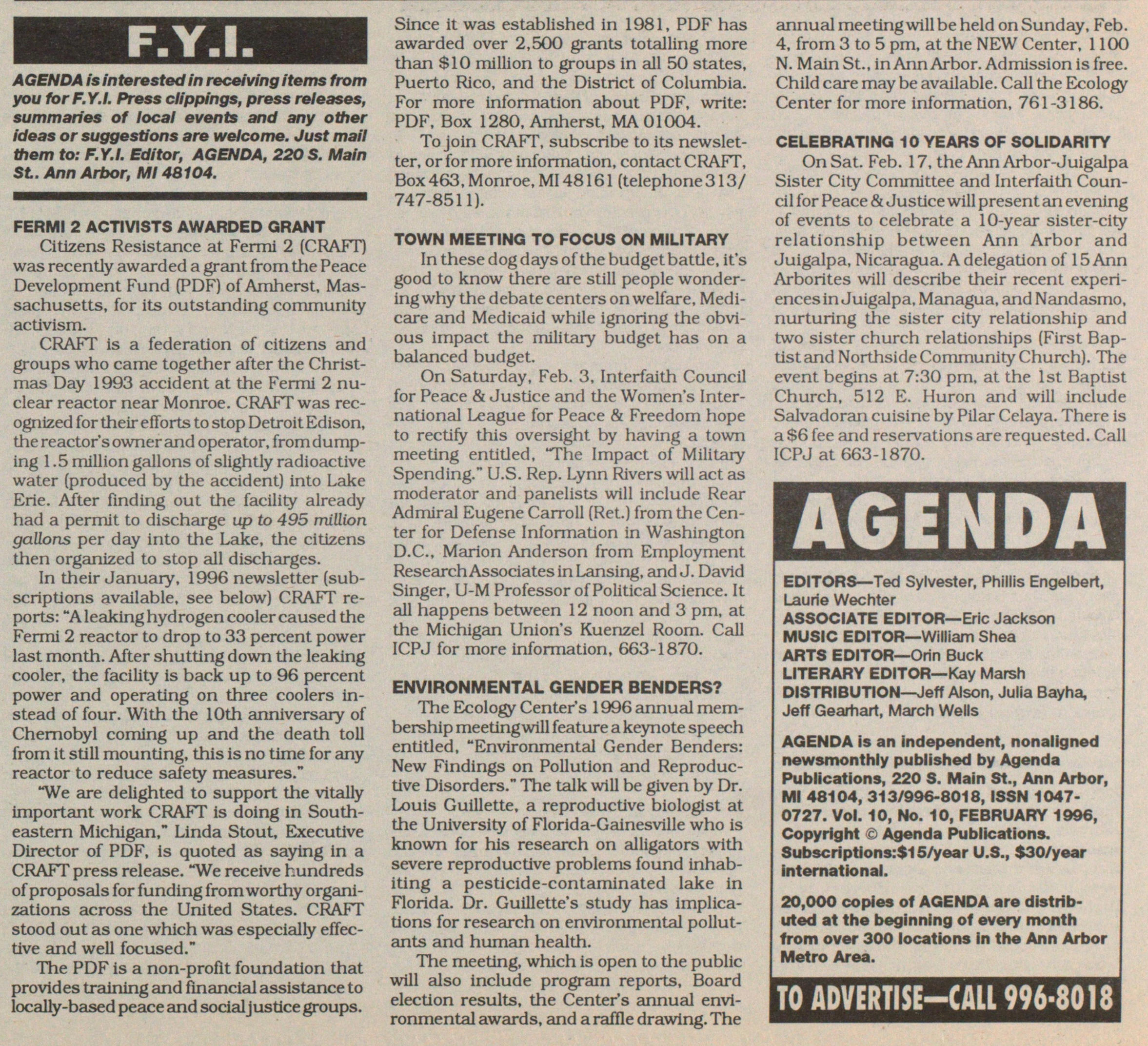 AGENDA is interested in receiving items f rom you forF.Y.I. Press clippings, press releases, summanes of local events and any other ideas or suggestions are welcome. Just mail them to: F.Y.I. Editor, AGENDA, 2205. Main SL. Ann Arbor, Ml 48104. FERMI 2 ACTIVISTS AWARDED GRANT Citizens Resistance at Fermi 2 (CRAFT) was recently awarded a grant from the Peace Development Fund (PDF) of Amherst, Massachusetts, for its outstanding community activism. CRAFT is a federation of citizens and groups who came together after the Christmas Day 1993 accident at the Fermi 2 nuclear reactor near Monroe. CRAFT was recognized for their efforts to stop Detroit Edison, the reactors owner and operator, fromdumping 1 .5 million gallons of slightly radioactive water (produced by the accident) into Lake Erie. After finding out the facility already had a permit to discharge up to 495 miüion gallons per day into the Lake, the citizens then organized to stop all discharges. In their January, 1996 newsletter (subscriptions available, see below) CRAFT reports: "A leaking hydrogen cooler caused the Fermi 2 reactor to drop to 33 percent power last month. After shutting down the leaking cooler, the facility is back up to 96 percent power and operating on three coolers instead of four. With the lOth anniversary of Chemobyl coming up and the death toll from it still mounting, this is no time for any reactor to reduce safety measures." "We are delighted to support the vitally important work CRAFT is doing in Southeastern Michigan," Linda Stout, Executive Director of PDF, is quoted as saying in a CRAFT press release. "We receive hundreds of pro posals for funding from worthy organizations across the United States. CRAFT stood out as one which was especially effective and well focused." The PDF is a non-proflt foundation that provides training and financial assistance to locally-based peace and social jusüce groups. Since it was established in 1981, PDF has awarded over 2,500 grants totalling more than $10 million to groups in all 50 states, Puerto Rico, and the District of Columbia. For more information about PDF, write: PDF, Box 1280, Amherst, MA 01004. To join CRAFT, subscribe to its newsletter, or for more information, contact CRAFT, Box 463, Monroe, MI 48 1 6 1 (telephone 3 1 3 747-8511). TOWN MEETING TO FOCUS ON MILITARY In these d og d ays of the budget battle, it's good to know there are still people wondering why the debate centers on welfare, Medicare and Medicaid while ignoring the obvious impact the military budget has on a balanced budget. On Saturday, Feb. 3, Interfaith Council for Peace & Justice and the Women's International League for Peace & Freedom hope to rectify this oversight by having a town meeting entitled, "The Impact of Military Spending." U.S. Rep. Lynn Rivers will act as moderator and panelists will include Rear Admiral Eugene Carroll (Ret.) from the Center for Defense Information in Washington D.C., Marión Anderson from Employment Research Associates in Lansing, and J. David Singer, U-M Professor of Political Science. It all happens between 12 noon and 3 pm, at the Michigan Union's Kuenzel Room. Cali ICPJ for more information, 663-1870. ENVIRONMENTAL GENDER BENDERS? The Ecology Center's 1 996 annual membership meetingwill feature a keynote speech entitled, "Environmental Gender Benders: New Findings on Pollution and Reproductive Disorders." The talk will be given by Dr. Louis Guillette, a reproductive biologist at the University of Florida-Gainesville who is known for his research on alligators wlth severe reproductive problems found inhabiting a pesticide-contaminated lake in Florida. Dr. Guillette's study has implicatlons for research on environmental pollutants and human health. The meeting, whlch is open to the public will also include program reports. Board election results, the Center's annual environmental awards, and a raffle drawing. The annual meeting will be held on Sunday, Feb. 4, from 3 to 5 pm, at the NEW Center, 1 100 N. Main St., in Ann Arbor. Admission is free. Child care may be available. Cali the Ecology Center for more information, 76 1 -3 1 86. CELEBRATING 10 YEARS OF SOLIDARITY OnSat. Feb. 1 7, the Ann Arbor-Juigalpa Sister City Committee and Interfaith Council for Peace & Justice will present an evening of events to celébrate a 10-year sister-city relationship between Ann Arbor and Juigalpa, Nicaragua. A delegation of 1 5 Ann Arborites will describe their recent experiences in Juigalpa. Managua, and Nandasmo, nurturing the sister city relationship and two sister church relationships (First Baptist and Northside Community Church). The event begins at 7:30 pm, at the lst Baptist Church, 512 E. Huron and will include Salvadoran cuisine by Pilar Celaya. There is a $6 fee and reservations are requested. Cali ICPJ at 663-1870.