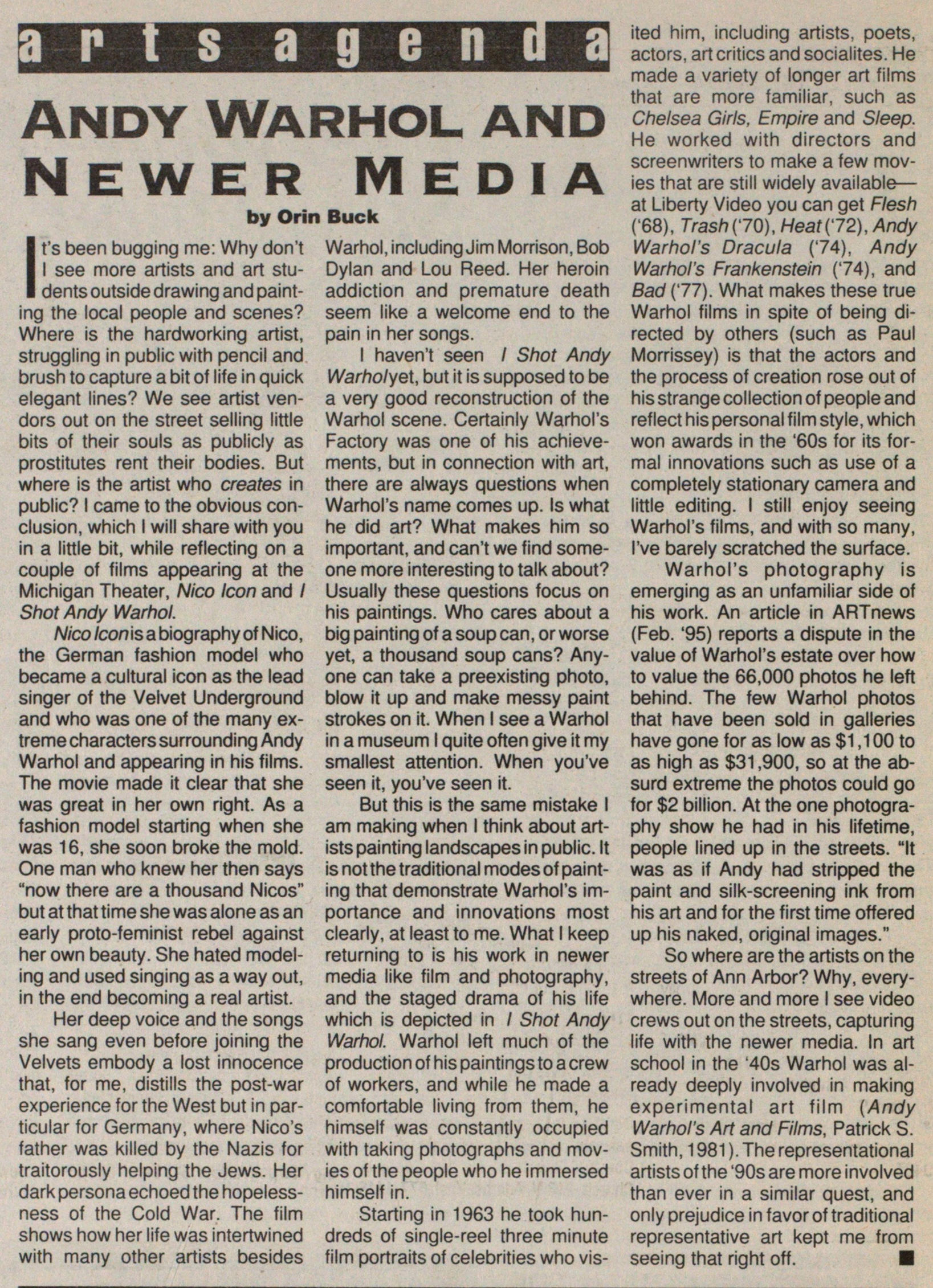 3 i m Fui in F] Ít's been bugging me: Why don't I see more artists and art students outside drawing and painting the local people and scènes? Where s the hardworking artist, struggling in public with pencil and brush to capture a bit of life in quick elegant lines? We see artist vendors out on the street selling little bits of their souls as publicly as prostitutes rent their bodies. But where is the artist who creates in public? I came to the obvious conclusión, which I will share with you in a little bit, white reflecting on a couple of films appearing at the Michigan Theater, Nico Icon and Shot Andy Warhol. Nico Iconis a biography of Nico, the Germán fashion model who became a cultural icon as the lead singer of the Velvet Underground and who was one of the many extreme characters surrounding Andy Warhol and appearing in his films. The movie made it clear that she was great in her own right. As a fashion model starting when she was 1 6, she soon broke the mold. One man who knew her then says "now there are a thousand Nicos" but at that time she was alone as an early proto-feminist rebel against her own beauty. She hated modeling and used singing as a way out, in the end becoming a real artist. Her deep voice and the songs she sang even before joining the Velvets embody a lost innocence that, for me, distills the post-war experience for the West but in particular for Germany, where Nico's father was killed by the Nazis for traitorously helping the Jews. Her dark persona echoed the hopelessness of the Cold War. The film shows how her life was intertwined with many other artists besides Warhol, including Jim Morrison, Bob Dylan and Lou Reed. Her heroin addiction and premature death seem like a welcome end to the pain in her songs. I haven't seen Shot Andy Warholyet, but it is supposed to be a very good reconstruction of the Warhol scène. Certainly Warhol's Factory was one of his achievements, but in connection with art, there are always questions when Warhol's name comes up. Is what he did art? What makes him so important, and can't we find someone more interesting to talk about? Usually these questions focus on his paintings. Who cares about a big painting of a soup can, or worse yet, a thousand soup cans? Anyone can take a preexisting photo, blow it up and make messy paint strokes on it. When I see a Warhol in a museum I quite often give it my smallest attention. When you've seen it, you've seen it. But this is the same mistake I am making when I think about artists painting landscapes in public. It is not the traditional modes of painting that demónstrate Warhol's importance and innovations most clearly, at least to me. What I keep returning to is his work in newer media like film and photography, and the staged drama of his life which is depicted in Shot Andy Warhol. Warhol left much of the production of his paintings to a crew of workers, and while he made a comfortable living from them, he himself was constantly occupied with taking photographs and movies of the people who he immersed himself in. Starting in 1963 he took hundreds of single-reel three minute film portraits of celebhties who ted him, including artists. poets, actors, art critics and socialites. He made a variety of longer art films that are more familiar, such as Chelsea Girls, Empire and Sleep. He worked with directors and screenwriters to make a few movies that are still widely available - at Liberty Video you can get Flesh C68), Trash (70), Heat {'72), Andy Warhol's Dracula (74), Andy Warhol's Frankenstein (74), and Bad (77). What makes these true Warhol films in spite of being directed by others (such as Paul Morrissey) is that the actors and the process of creation rose out of his strange collection of people and reflect his personal film style, which won awards in the '60s for its formal innovations such as use of a completely stationary camera and little editing. I still enjoy seeing Warhol's films, and with so many, l've barely scratched the surface. Warhol's photography is emerging as an unfamiliar side of his work. An article in ARTnews (Feb. '95) reports a dispute in the value of Warhol's estáte over how to value the 66,000 photos he left behind. The few Warhol photos that have been sold in galleries have gone for as low as $1 , 1 00 to as high as $31 ,900, so at the absurd extreme the photos could go for $2 billion. At the one photography show he had in his lifetime, people lined up in the streets. "It was as if Andy had stripped the paint and silk-screening ink from his art and for the first time offered up his naked, original images." So where are the artists on the streets of Ann Arbor? Why, everywhere. More and more I see video crews out on the streets, capturing life with the newer media. In art school in the '40s Warhol was already deeply involved in making experimental art film (Andy Warhol's Art and Films, Patrick S. Smith, 1981). The representational artists of the '90s are more involved than ever in a similar quest, and only prejudice in favor of traditional representative art kept me from seeing that right off. ■