True Crime The Dogs Of Winter 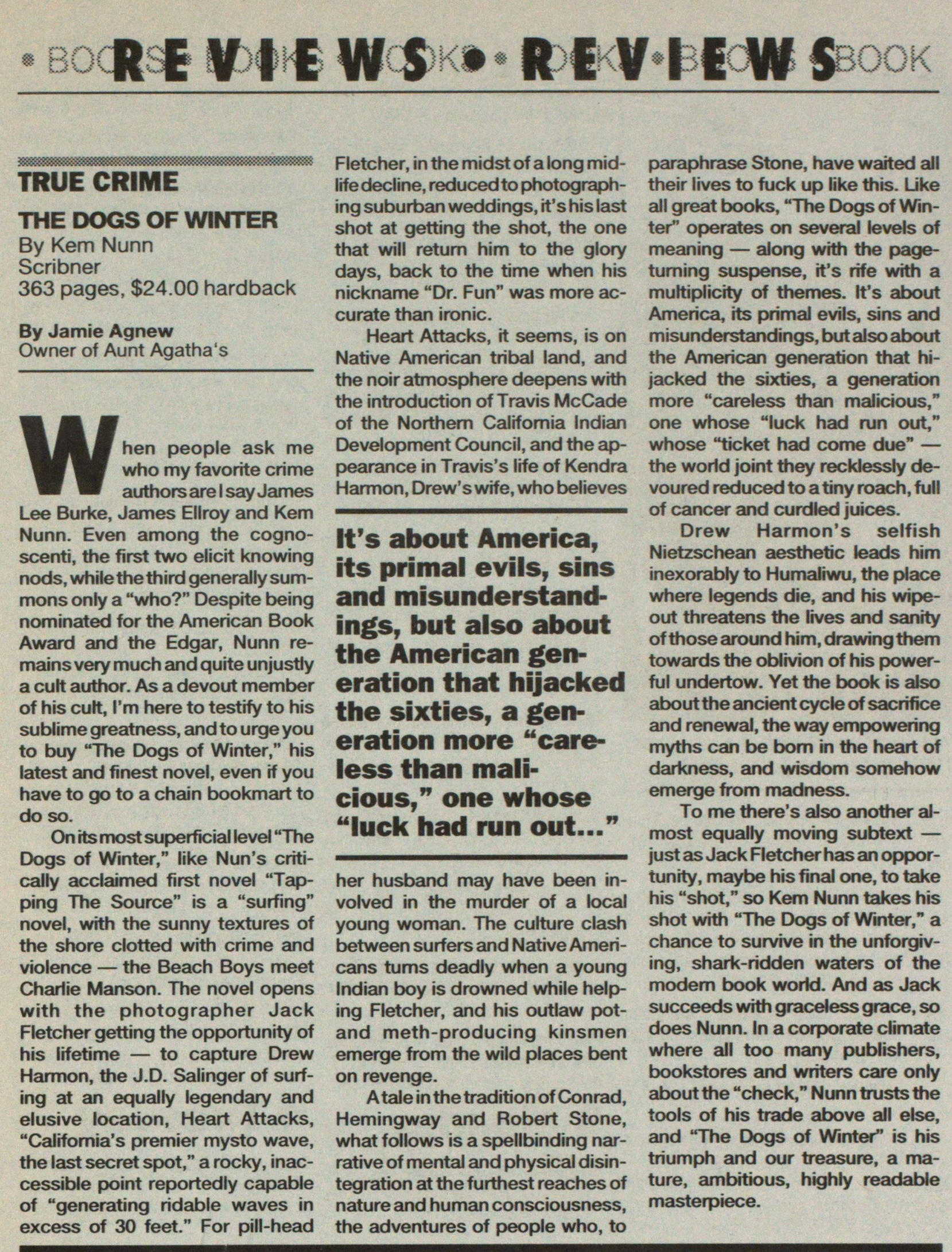 By Kern Nunn Scribner 363 pages, $24.00 hardback Owner of Aunt Agatha s When people ask me who my favorite crime aut hors are I say James Lee Burke, James Ellroy and Kern Nunn. Even among the cognoscenti, the first two elicit knowing nod s , while the third generally summons only a "who?" Despite being nominated for the American Book Award and the Edgar, Nunn remains very much and quite unjustly a cult author. As a devout member of his cult, l'm here to testify to his sublime greatness, and to urge you to buy "The Dogs of Winter," his latest and finest novel, even if you have to go to a chain bookmart to do so. On rts most superficial le vel "The Dogs of Winter," like Nun's critically acclaimed first novel "Tapping The Source" is a "surfing" novel, with the sunny textures of the shore clotted with crime and violence - the Beach Boys meet Charlie Manson. The novel opens with the photographer Jack Fletcher getting the opportunity of his lifetime - to capture Drew Harmon, the J.D. Salinger of surfing at an equally legendary and elusive location, Heart Attacks, "Califomia's premier mysto wave, the last secret spot," a rocky, inaccessible point reportedly capable of "generating ridable waves in excess of 30 feet." For pill-head Fletcher, in the midst of a long midIrfe decline, reducedto photographing suburban weddings, it'shis last shot at getting the shot, the one that will return him to the glory days, back to the time when his nickname "Dr. Fun" was more accurate than ironie. Heart Attacks, it seems, is on Native American tribal land, and the noir atmosphere deepens with the introduction of Travis McCade of the Northern California Iridian Development Council, and the appearance in Travis's life of Kendra Harmon, Drew'swife.whobelieves her husband may have been involved in the murder of a local young woman. The culture clash between surfers and Native Americans tums deadly when a young Indian boy s drowned while helping Fletcher, and his outlaw potand meth-producing kinsmen emerge from the wild places bent on revenge. A tale in the tradition of Conrad, Hemingway and Robert Stone, what follows is a spellbinding narrative of mental and physical disintegration at the f urthest reaches of nature and human consciousness, the adventures of people who, to paraphrase Stone, have warted all their lives to fuck up like this. Like all great books, "The Dogs of Winter" operates on several levéis of meaning - along with the pageturning suspense, rt's rife with a multjplicrty of themes. It's about America, its primal evils, sins and misunderstandings, but also about the American generation that hijacked the sixties, a generation more "careless than malicious." one whose "luck had run out," whose "ticket had come due" - the worid joint they recklessly devou red reduced to a t ny roach , f ui I of cáncer and curdled juices. Drew Harmon's selfish Nietzschean aesthetic leads him inexorably to Humaliwu, the place where legends die, and his wipeout threatens the lives and sanity of those around him, drawing them towards the obli vion of his powerful undertow. Yet the book is also about the ancient cycle of sacrifice and renewal, the way empowering myths can be bom in the heart of darkness, and wisdom somehow emerge from madness. To me there's also another almost equally moving subtext - just as Jack Fletcher has an opportunity , maybe his final one, to take his "shot," so Kern Nunn takes his shot with "The Dogs of Winter," a chance to survive in the unforgiving, shark-ridden waters of the modem book worid. And as Jack succeeds with graceless grace, so does Nunn. In a corporate climate where all too many publishers, bookstores and writers care only about the "check," Nunn trusts the tools of his trade above all else, and "The Dogs of Winter" is his triumph and our treasure, a mature, ambitious, highly readabie masterpiece. It's about America, its primal evils, sins and misunderstandings, but also about the American generation that hijacked the sixties, a generation more "careless than malicious," one whose "luck had run out..." eocRsE f)Hf; W RIKVI &YP Sbook