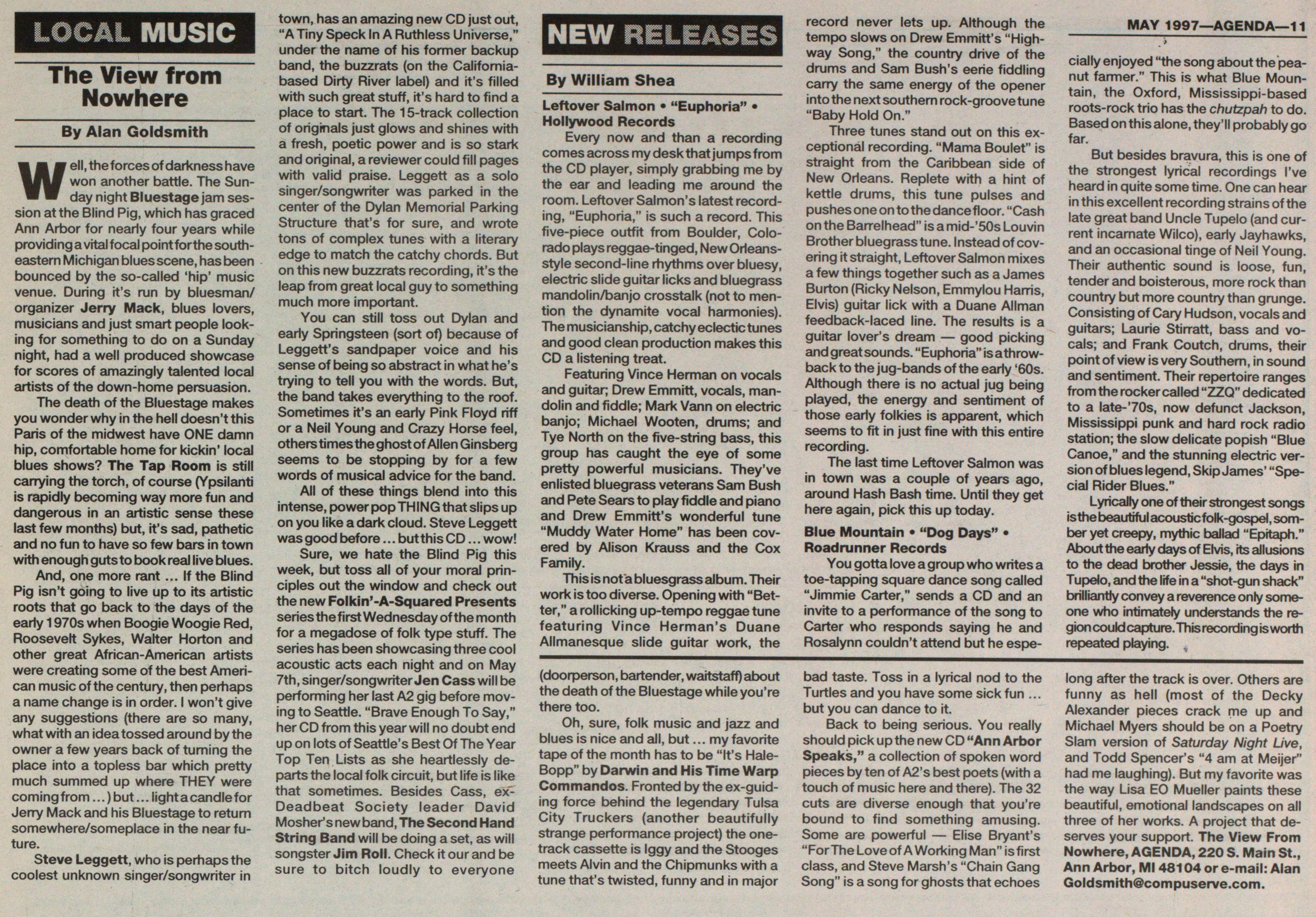 Well.theforcesofdarknesshave won another battle. The Sunday night Bluestage jam session at the Blind Pig, which has graced Ann Arbor for neariy four years while providing a vital focal pointforthesoutheastern Michigan blues scène, has been bounced by the so-called 'hip' music venue. During it's run by bluesman organizer Jerry Mack, blues lovers, musicians and just smart people looking for something to do on a Sunday night, had a well produced showcase for scores of amazingly talented local artists of the down-home persuasión. The death of the Bluestage makes you wonder why in the heil doesn't this Paris of the midwest have ONE damn hip, comfortable home for kickin' local blues shows? The Tap Room is still carrying the torch, of course (Ypsilanti is rapidly becoming way more fun and dangerous in an artistic sense these last few months) but, it's sad, pathetic and no fun to have so few bars in town with enough guts to book real live blues. And, one more rant ... If the Blind Pig isn't going to live up to rts artistic roots that go back to the days of the early 1 970s when Boogie Woogie Red, Roosevelt Sykes, Walter Horton and other great African-American artists were creating some of the best American music of the century, then perhaps a name change is in order. I won't give any suggestions (there are so many, what with an idea tossed around by the owner a few years back of turning the place into a topless bar which pretty much summed up where THEY were coming f ram . . . ) but . . . light a candle for Jerry Mack and nis Bluestage to return somewheresomeplace in the near future. Steve Leggett. who is perhaps the coolest unknown singersongwriter in town, has an amazing new CD just out, "A Tiny Speek In A Ruthless Universe," under the name of his former backup band, the buzzrats (on the Califomiabased Dirty River label) and it's filled with such great stuff, it's hard to find a place to start. The 1 5-track collection of origináis just glows and shines with a fresh, poetic power and is so stark and original, a reviewer could f II pages with valid praise. Leggett as a solo singersongwriter was parked in the center of the Dylan Memorial Parking Structure that's for sure, and wrote tons of complex tunes with a literary edge to match the catchy chords. But on this new buzzrats recording, it's the leap f rom great local guy to something much more important. You can still toss out Dylan and eaiiy Springsteen (sort of) because of Leggett's sandpaper voice and his sense of being so abstract in what he's trying to teil you with the words. But, the band takes everything to the roof. Sometimes it's an early Pink Floyd riff or a Neil Young and Crazy Horse feel, others times the ghost of Allen Ginsberg seems to be stopping by for a few words of musical advice for the band. All of these things blend into this intense, power pop TH ING that slips up on you like a dark cloud. Steve Leggett was good before . . . but this CD ... wow! Sure, we hate the Blind Pig this week, but toss all of your moral principies out the window and check out the new Folkin'-A-Squared Presents series thefirst Wednesday of the month for a megadose of folk type stuff. The series has been showcasing three cool acoustic acts each night and on May 7th, singersongwriter Jen Casswillbe performing her last A2 gig before moving to Seattle. "Brave Enough To Say," her CD from this year will no doubt end up on lots of Seattle's Best Of The Year Top Ten Lists as she heartlessly departs the local folk circuit, but life is like that sometimes. Besides Cass, exDeadbeat Society leader David Mosher's new band, The Second Hand String Band will be doing a set, as will songster Jim Roll. Check it our and be sure to bitch loudly to everyone (doorperson, batten der, waitstaff) about the death of the Bluestage while you're there too. Oh, sure, folk music and jazz and blues is nice and all, but ... my favorite tape of the month has to be "It's HaleBopp" by Darwin and His Time Warp Commandos. Fronted by the ex-guidng force behind the legendary Tulsa City Truckers (another beautifully strange performance project) the onetrack cassette is Iggy and the Stooges meets Alvin and the Chipmunks with a tune that's twisted, funny and in major bad taste. Toss in a lyrical nod to the Turtles and you have some sick fun ... but you can dance to it. Back to being serious. You really should piek upthe new CO "Ann Arbor Speaks," a collection of spoken word pieces by ten of A2's best poets (with a touch of music here and there). The 32 cuts are diverse enough that you're bound to find something amusing. Some are powerful - Elise Bryant's "ForThe Love of A Working Man" isfirst class, and Steve Marsh's "Chain Gang Song" is a song for ghosts that echoes long after the track is over. Others are funny as heil (most of the Decky Alexander pieces crack me up and Michael Myers should be on a Poetry Slam version of Saturday Night Live, and Todd Spencer's "4 am at Meijer" had me laughing). But my favorite was the way Lisa EO Mueller paints these beautiful, emotional landscapes on all three of her works. A project that deserves your support. The View From Nowhere, AGENDA, 220 S. Main St., Ann Arbor , Ml 481 04 or e-mail: Alan Goldsmith@compuserve.com.