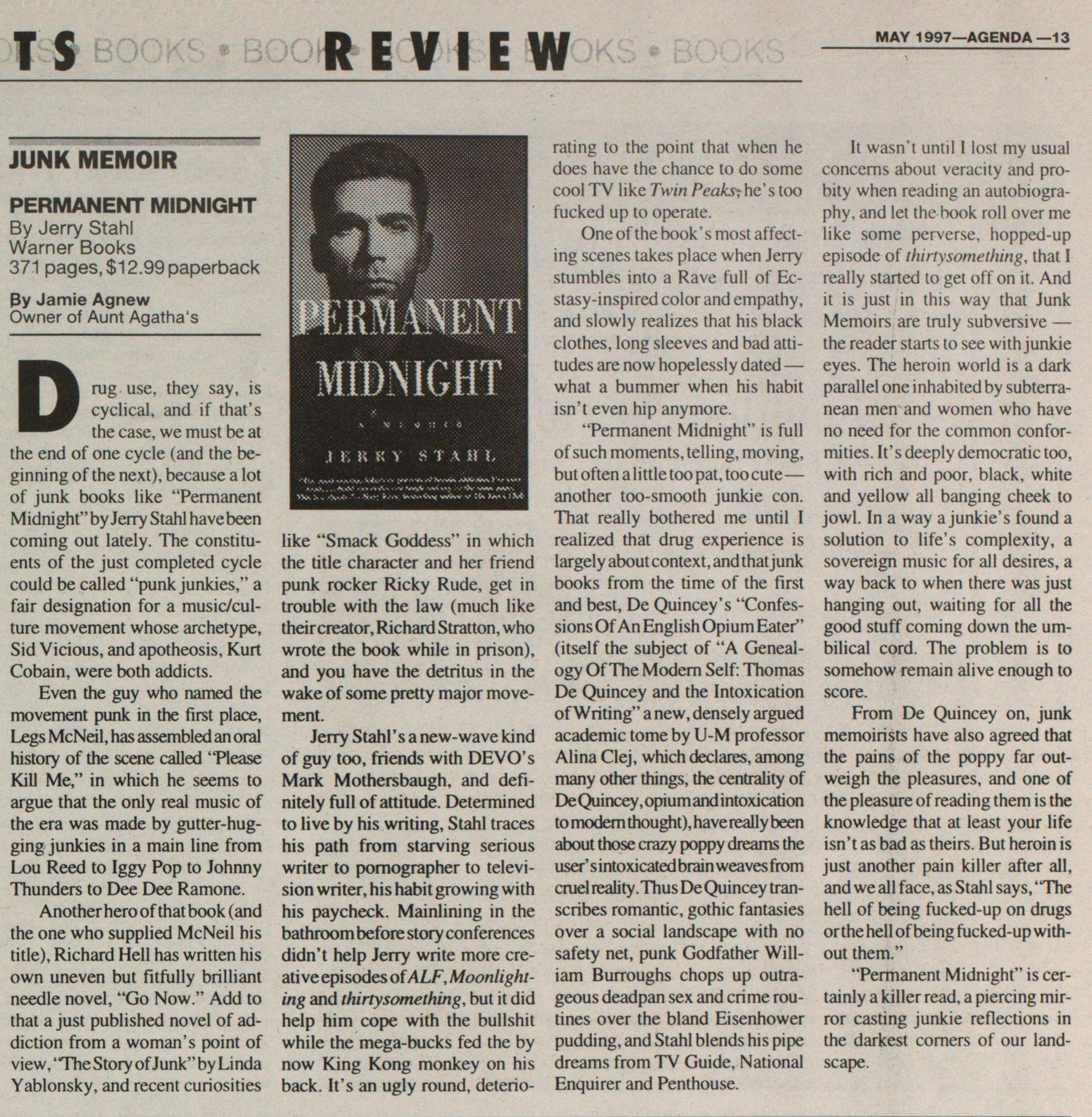 PERMANENT MIDNIGHT By Jerry Stahl Warner Books 371 pages, $12.99 paperback Drug use, they say, is cyclical, and if that's the case, we must be at the end of one cycle (and the beginning of the next), because a lot of junk books like "Permanent Midnight" by Jerry Stahl have been coming out lately. The constituents of the just completed cycle could be called "punk junkies," a fair designation for a musicculture movement whose archetype, Sid Vicious, and apotheosis, Kurt Cobain, were both addicts. Even the guy who named the movement punk in the first place, Legs McNeil, has assembled an oral history of the scène called 'Please Kil] Me," in which he seems to argue that the only real music of the era was made by gutter-hugging junkies in a main line from Lou Reed to Iggy Pop to Johnny Thunders to Dee Dee Ramone. Another hero of that book (and the one who supplied McNeil his title), Richard Heil has written his own uneven but fitfully brilliant needie novel, "Go Now." Add to that a just published novel of addiction from a woman's point of view, "TheStory of Junk"by Linda Yablonsky, and recent curiosities like "Smack Goddess" in which the title character and her friend punk rocker Ricky Rude, get in trouble with the law (much like theircreator, Richard Stratton, who wrote the book while in prison), and you have the detritus in the wake of some pretty major movement. Jerry Stahl's a new-wave kind of guy too, friends with DEVO's Mark Mothersbaugh, and defïnitely full of attitude. Determined to live by his writing, Stahl traces his path from starving serious writer to pomographer to televisión writer, his habit growing with his paycheck. Mainlining in the bathroom before story conferences didn't help Jerry write more creati ve episodes of ALF, Moonlighting and thirtysomething, but it did help him cope with the bullshit while the mega-bucks fed the by now King Kong monkey on his back. It's an ugly round, rating to the point that when he does have the chance to do some cool TV like Twin Peaks-,ht's, too fucked up to opérate. One of the book ' s most af fecting scènes takes place when Jerry stumbles into a Rave full of Ecstasy-inspired color and empathy , and slowly realizes that his black clothes, long sleeves and bad attitudes are now hopelessly dated - what a bummer when his habit isn't even hip anymore. "Permanent Midnight" is full of such moments, telling, moving, but often a little too pat, too cute - another too-smooth junkie con. That really bothered me until I realized that drug experience is largely about context, and that junk books from the time of the first and best, De Quincey's "ConfessionsOf An English Opium Eater" (itself the subject of "A Genealogy Of The Modem Self: Thomas De Quincey and the Intoxication of Writing" a new, densely argued academie tome by U-M professor Alina Clej, which declares, among many other things, the centrality of De Quincey, opium and intoxication to modern thought), have really been about those crazy poppy dreams the user' s intoxicated brain weaves from cruel reality .Thus De Quincey transcribes romantic, gothic fantasies over a social landscape with no safety net, punk Godfather William Burroughs chops up outrageous deadpan sex and crime routines over the bland Eisenhower pudding, and Stahl blends his pipe dreams from TV Guide, National Enquirer and Penthouse. Il wasn't unlil 1 lost my usual concerns about veracity and probity when reading an autobiography, and let the book roll over me like some perverse, hopped-up episode of thirtysomething, that I really started to get off on it. And it is just in this way that Junk Memoirs are truly subversive - the reader starts to see with junkie eyes. The heroin world is a dark parallel one inhabited by subterranean men and women who have no need for the common conformities. It'sdeeply democratie too, with rich and poor, black, white and yellow all banging cheek to jowl. In a way a junkie's found a solution to life's complexity, a sovereign music for all desires, a way back to when there was just hanging out, waiting for all the good stuff coming down the umbilical cord. The problem is to somehow remain alive enough to score. From De Quincey on, junk memoirists have also agreed that the pains of the poppy far outweigh the pleasures, and one of the pleasure of reading them is the knowledge that at least your life isn't as bad as theirs. But heroin is just another pain killer after all, and we all face, as Stahl says, "The heli of being fucked-up on drugs orthe heil of being fucked-up without them." "Permanent Midnight" is certainly a killer read, a piercing mirror casting junkie reflections in the darkest corners of our landscape.