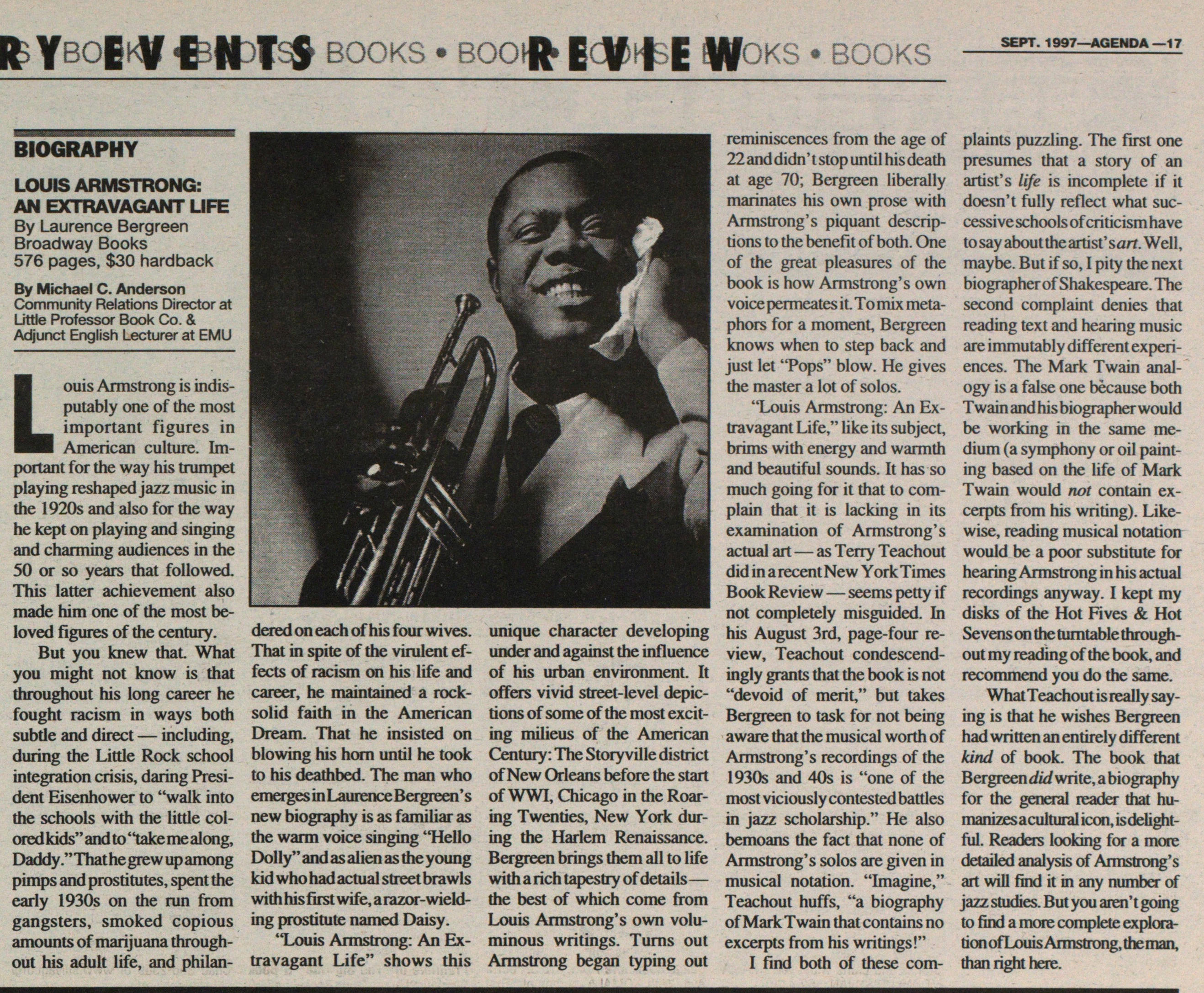 LOUIS ARMSTRONG: AN EXTRAVAGANT LIFE By Laurence Bergreen Broadway Books 576 pages, $30 hardback By Michael C. Anderson Community Relations Director at LitUe Professor Book Co. & Adjunct English Lecturer at EMU Louis Armstrong is indisputably one of the most important figures in American culture. Important for the way his trumpet playing reshaped jazz music in the 1920s and also for the way he kept on playing and singing and charming audiences in the 50 or so years that followed. This latter achievement also made him onc of the most beloved figures of the century. But you knew that What you might not know is that throughout his long caieer he fought racism in ways both subtle and direct - including, during the Little Rock school integration crisis, daring President Eisenhower to "walk into the schools with the little colored kids" and to "take me along, Daddy ." That he grew up among pimps and prostitutes, spent the early 1930s on the run from gangsters, smoked copious amounts of marijuana throughout his adult life, and dered on each of h i s four wives. That in spite of the virulent effects of racism on his life and career, he maintained a rocksolid faith in the American Dream. That he insisted on blowing his hom until he took to his deathbed. The man who emerges in Laurence Bergreen ' s new biography is as familiar as the warm voice singing "Helio Dolly" and as alien as the young kid who had actual strect brawls with his first wif e, a wielding prostitutc named Daisy . "Louis Armstrong: An Extravagant Life" shows this unique character developing under and against the influence of his urban environment. It offers vivid street-level depictions of some of the most exciting milieus of the American Century : The Story ville district of New Orleans bef ore the start of WWI, Chicago in the Roaring Twenties, New York during the Harlem Renaissance. Bergreen brings them all to life with a richtapestry of details - the best of which come from Louis Armstrong's own voluminous writings. Turns out Armstrong began typing out reminiscences from the age of 22 and didn' t stop until his death at age 70; Bergreen liberally marinates his own prose with Annslrong's piquant descriptions to the benefit of both. One of the great pleasures of the book is how Armstrong's own voice permeates it To mix metaphors for a moment, Bergreen knows when to step back and just let "Pops" blow. He gives the master a lot of solos. "Louis Armstrong: An Extravagant Life," like its subject, brims with energy and warmth and beautiful sounds. It has so much going for it that to complain that it is lacking in its examination of Armstrong's actual art - as Terry Teachout did in a recent New York Times Book Review - seems petty if not completely misguided. In his August 3rd, page-four review, Teachout condescendingly grants that the book is not "devoid of merit," but takes Bergreen to task for not being aware that the musical worth of Armstrong's recordings of the 1930s and 40s is "one of the most viciously contested battles in jazz scholarship." He also bemoans the fact that none of Armstrong's solos are given in musical notation. "Imagine," Teachout huffs, "a biography of Mark Twain that containsno excerpts from his writings!" I find both of these plaints puzzling. The first one presumes that a story of an artist's life is incomplete if it doesn't fully reflect what successive schools of criticism have to say about the artist' sart. Well, maybe. But if so, I pity the next biographer of Shakespeare. The second complaint denies that reading text and hearing music are immutably different experiences. The Mark Twain analogy is a false one bècause both Twain and his biographer would be working in the same medium (a symphony or oil pain t ing based on the life of Mark Twain would not contain excerpts from his writing). Likewise, reading musical notation would be a poor substitute for hearing Armstrong in his actual recordings anyway. I kept my disks of the Hot Fives & Hot Se vens on the tumtable throughout my reading of the book, and recommend you do the same. WhatTeachout is really saying is that he wishes Bergreen had written an entirely different kind of book. The book that Bergreen did write, a biography for the general reader that humanizesacultural icon, isdelightt ui. Readers looking for a more dctailed analysis of Armstrong's art will find it in any number of jazz studies. But you aren't going to find a more complete exploration ofLouis Armstrong, the man, than right here.