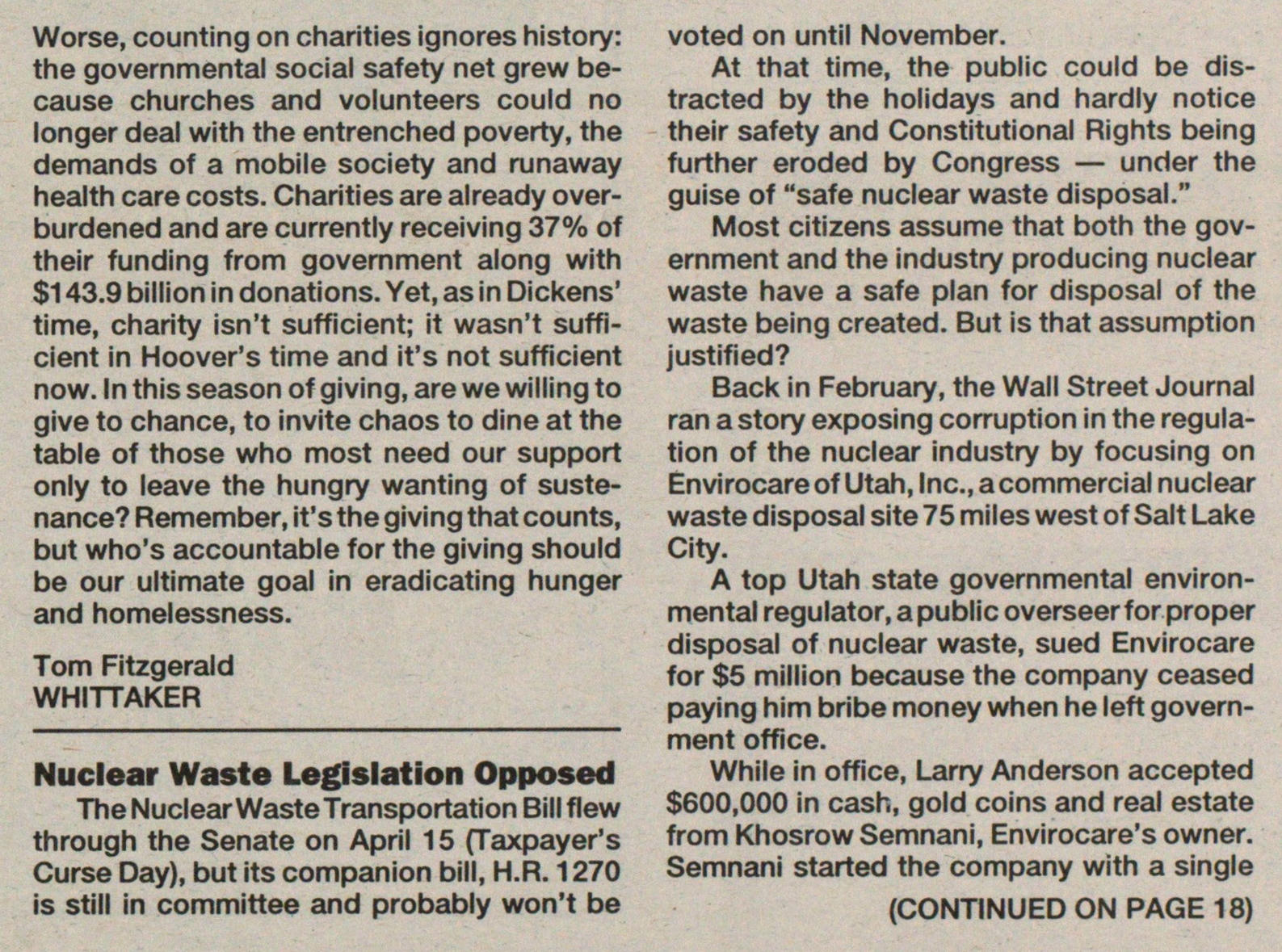 The Nuclear Waste Transportation Bill f lew through the Senate on April 1 5 (Taxpayer's Curse Day), but its companion bilí, H.R. 1270 is still in committee and probably won't be voted on until November. At that time, the public could be distracted by the holidays and hardly notice their safety and Constitutional Rights being further eroded by Congress - under the guise of "safe nuclear waste disposal." Most citizens assume that both the government and the industry producing nuclear waste have a safe plan for disposal of the waste being created. But is that assumption justified? Back in February, the Wall Street Journal ran a story exposing corruption in the regulation of the nuclear industry by focusing on Envirocare of Utah, Inc., a commercial nuclear waste disposal site 75 miles west of Salt Lake City. A top Utah state governmental environmental regulator, a public overseer for proper disposal of nuclear waste, sued Envirocare for $5 million because the company ceased paying him bribe money when he left government office. While in office, Larry Anderson accepted $600,000 in cash, gold coins and real estáte from Khosrow Semnani, Envirocare's owner. Semnani starled the company with a single (CONTINUED ON PAGE 18) LETTERS (FROM PAGE 3) contract a decade ago to dispose of waste from an abandoned Salt Lake City uranium mili. After receiving permits from Anderson, Semnani expanded into a national commercial low-level radioactive dump. Soon, his busy Clive site, one of three operating in this country, had tons of radioactive waste pour in daily. In exchange for the bribes overtheyears, Anderson also let Semnani's nuclear disposal company by with less stringent rules - which allowed Semnani to charge lower pnces. For example, Semnani was only charging $115 per barrel, compared with $3,800 at Hanford and $2,400 at Barnwell, S.C., the othertwo operating low-level radioactive waste disposal sites. The Journal article dealt with low-level nuclear waste disposal. The Nuclear Waste Transportation Bill deals with high-level nuclear waste, and plans are to ship it to an unproven site, store it in untried technology, with unknown consequences and then retrieve it at some later date. This is not a "solution" to the nuclear waste problem. - At this time, we need to leave high-level waste where it is generated until safe methods of disposal are assured. If this means the shut-down of reactors without additional fuel pool storage, so beit. Nuclear waste disposal should become a national debate. Citizen input will assure that deadly radioactive wastes will be dealt with in the safest manner possible. Now would be the time to teil your congressional rep. to vote against H.R. 1 270.