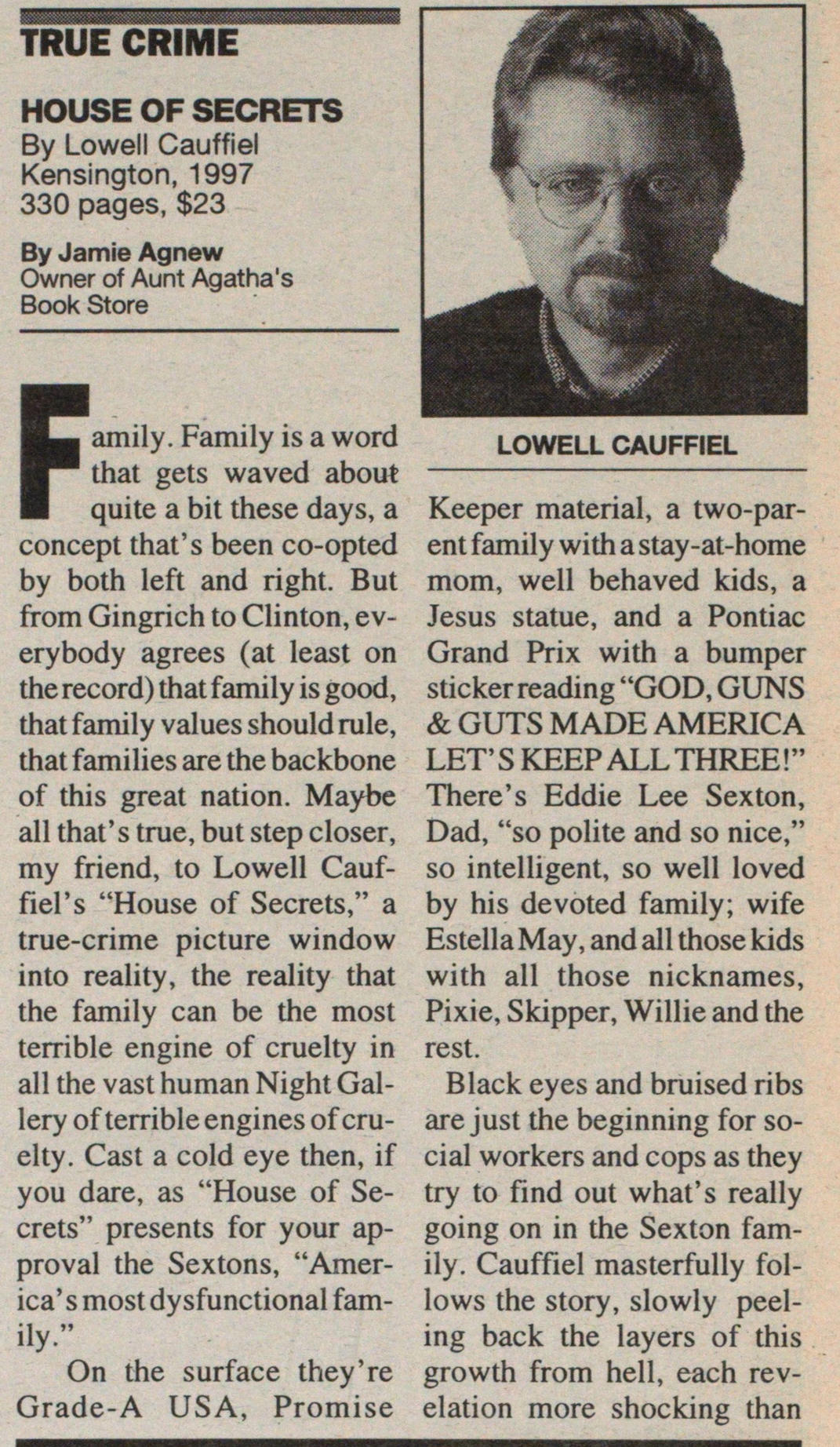 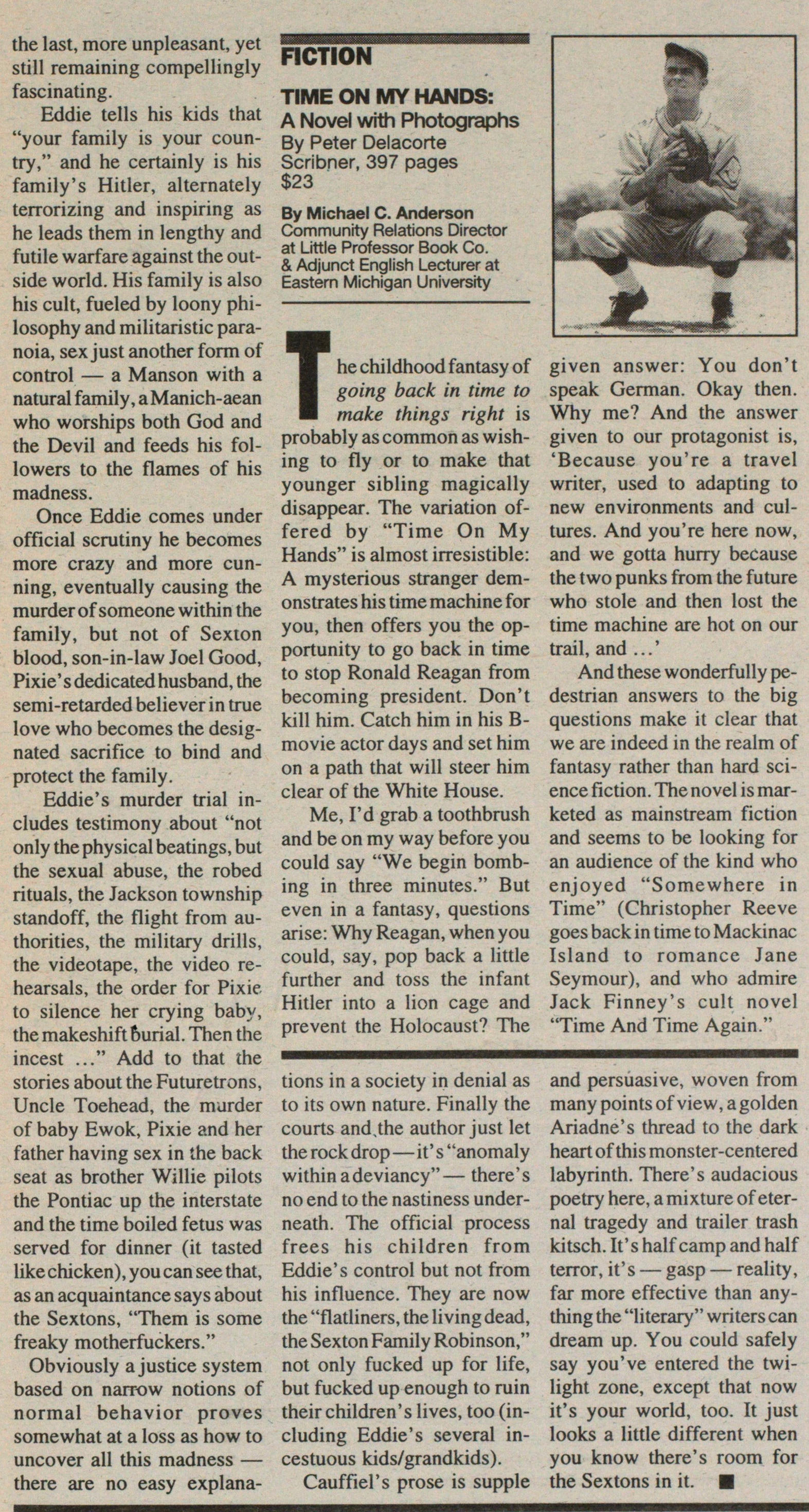 By Lowell Cauffiel Kensington, 1997 330 pages, $23 Book Store Family. Family is a word that gets waved about quite a bit these days, a concept that's been co-opted by both left and right. But from Gingrich to Clinton, everybody agrees (at least on the record) that family is good, that family values should rule, that families are the backbone of this great nation. Maybe all that's true, but step closer, my friend, to Lowell Cauffiel's "House of Secrets," a true-crime picture window into reality, the reality that the family can be the most terrible engine of cruelty in all the vast human Night Gallery of terrible engines of cruelty. Cast a cold eye then, if you dare, as "House of Secrets" presents for your approval the Sextons, "America' s most dysfunctional family." On the surface they're Grade-A USA, Promise Keeper material, a two-parent family with a stay-at-home mom, well behaved kids, a Jesús statue, and a Pontiac Grand Prix with a bumper sticker reading "GOD, GUNS & GUTS MADE AMERICA LET'S KEEP ALL THREE!" There's Eddie Lee Sexton, Dad, "so polite and so nice," so intelligent, so well loved by his devoted family; wife Estella May, and all those kids with all those nicknames, Pixie, Skipper, Willie and the rest. Black eyes and bruised ribs are just the beginning for social workers and cops as they try to find out what's really going on in the Sexton family. Cauffiel masterfully follows the story, slowly peeling back the layers of this growth from heil, each revelation more shocking than the last, more unpleasant, yet still remaining compellingly fascinating. Eddie tells his kids that "your family is your country," and he certainly is his family' s Hitler, alternately terrorizing and inspiring as he leads them in lengthy and futile warfare against the outside world. His family is also his cult, fueled by loony philosophy and militaristic paranoia, sex just another form of control - a Manson with a natural family, a Manich-aean who worships both God and the Devil and feeds his followers to the flames of his madness. Once Eddie comes under official scrutiny he becomes more crazy and more cunning, eventually causing the murderof someone within the family, but not of Sexton blood, son-in-law Joel Good, Pixie'sdedicatedhusband, the semi-retarded believer in true love who becomes the designated sacrifice to bind and protect the family. Eddie' s murder trial includes testimony about "not only the physical beatings, but the sexual abuse, the robed rituals, the Jackson township standoff, the flight from authorities, the military drills, the videotape, the video rehearsals, the order for Pixie to silence her crying baby, the makeshift 6urial. Then the incest ..." Add to that the stories about the Futuretrons, Uncle Toehead, the murder of baby Ewok, Pixie and her father having sex in the back seat as brother Willie pilots the Pontiac up the interstate and the time boiled fetus was served for dinner (it tasted like chicken), you can see that, as an acquaintance says about the Sextons, "Them is some freaky motherfuckers." Obviously a justice system based on narrow notions of normal behavior proves somewhat at a loss as how to uncover all this madness - there are no easy tions in a society in denial as to its own nature. Finally the courts and.the author just let the rock drop - it' s "anomaly within adeviancy" - there's no end to the nastiness underneath. The official process frees his children from Eddie's control but not from his influence. They are now the "flatliners, the living dead, the Sexton Family Robinson," not only fucked up for life, but fucked up enough to ruin their children 's lives, too (including Eddie's several incestuous kidsgrandkids). Cauffïel's prose is supple and persuasive, woven from many points of view, a golden Ariadne's thread to the dark heartof this monster-centered labyrinth. There's audacious poetry here, a mixture of eternal tragedy and trailer trash kitsch. It's half camp and half terror, it's - gasp - reality, far more effective than anything the "literary " writers can dream up. You could safely say you've entered the twilight zone, except that now it's your world, too. It just looks a little different when you know there's room for the Sextons in it. ■