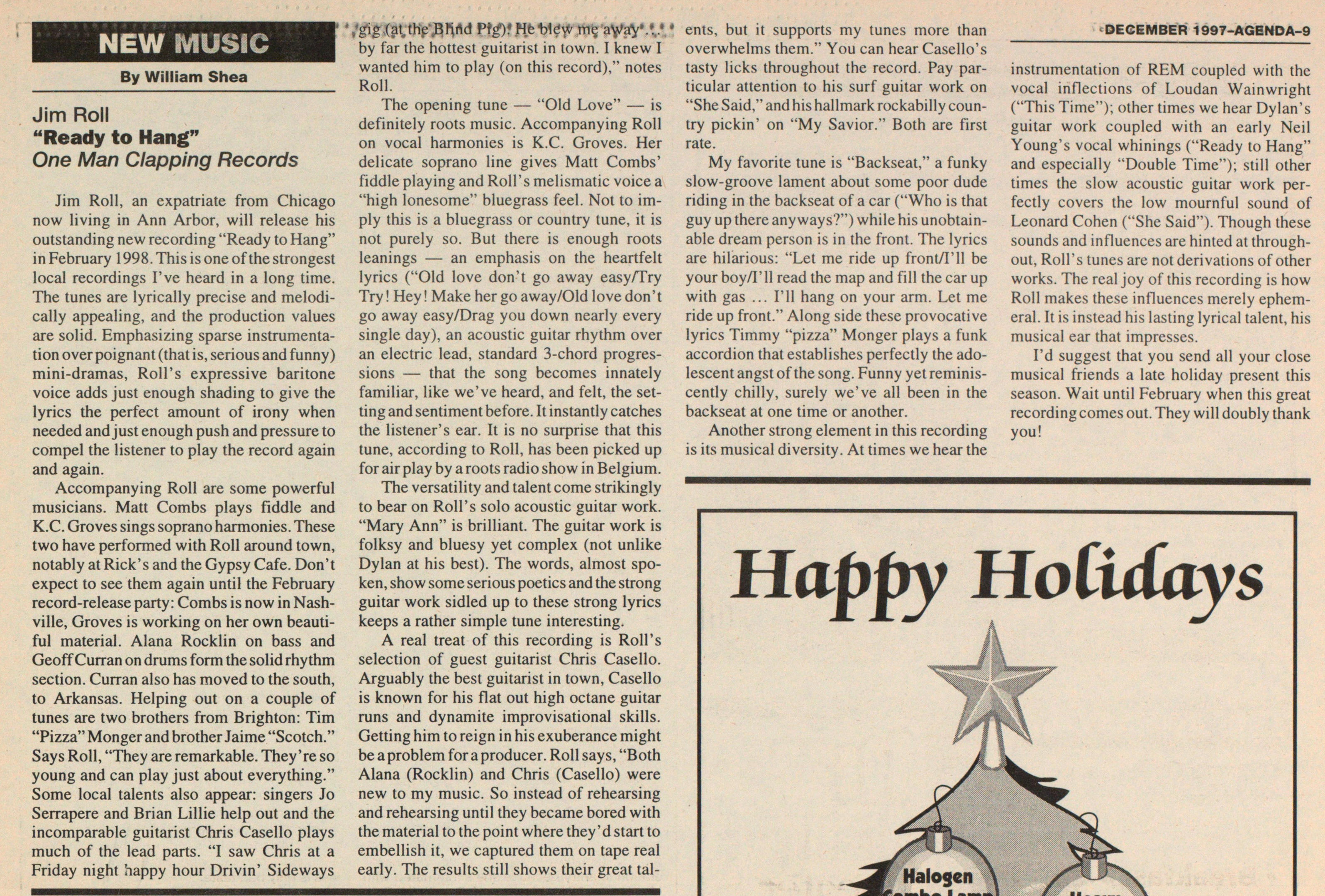 Jim Roll, an expatríate from Chicago now living in Ann Arbor, will release his outstanding new recording "Ready to Hang" in February 1 998. This is one of the strongest local recordings I've heard in a long time. The tunes are lyrically precise and melodically appealing, and the production values are solid. Emphasizing sparse instrumentation over poignant (that is, serious and funny) mini-dramas, Roll's expressive baritone voice adds just enough shading to give the lyrics the perfect amount of irony when needed and just enough push and pressure to compel the listener to play the record again and again. Accompanying Roll are some powerful musicians. Matt Combs plays fiddle and K.C. Groves sings soprano harmonies. These two have performed with Roll around town, notably at Rick's and the Gypsy Cafe. Don't expect to see them again until the February record-release party: Combs is now in Nashville, Groves is working on her own beautiful material. Alana Rocklin on bass and Geoff Curran on drums form the solid rhy thm section. Curran also has moved to the south, to Arkansas. Helping out on a couple of tunes are two brothers from Brighton: Tim "Pizza" Monger and brother Jaime "Scotch." Says Roll, "They are remarkable. They 're so young and can play just about everything." Some local talents also appear: singers Jo Serrapere and Brian Lillie help out and the incomparable guitarist Chris Casello plays much of the lead parts. "I saw Chris at a Friday night happy hour Drivin' Sideways gig (at. tHp-flïlrtd Mg)1 Hfe ttivc me, ayfoy . V. by far the hottest guitarist in town. I knew I wanted him to play (on this record)," notes Roll. The opening tune - "Old Love" - is definitely roots music. Accompanying Roll on vocal harmonies is K.C. Groves. Her delicate soprano line gives Matt Combs' fiddle playing and Roll's melismatic voice a "high lonesome" bluegrass feel. Not to imply this is a bluegrass or country tune, it is not purely so. But there is enough roots leanings - an emphasis on the heartfelt lyrics ("Old love don't go away easyTry Try ! Hey ! Make her go away Old love don' t go away easyDrag you down nearly every single day), an acoustic guitar rhythm over an electric lead, standard 3-chord progressions - that the song becomes innately familiar, like we've heard, and feit, the setting and sentiment before. It instantly catches the listener's ear. It is no surprise that this tune, according to Roll, has been picked up for air play by a roots radio show in Belgium. The versatility and talent come strikingly to bear on Roll's solo acoustic guitar work. "Mary Ann" is brilliant. The guitar work is folksy and bluesy yet complex (not unlike Dylan at his best). The words, almost spoken, show some serious poetics and the strong guitar work sidled up to these strong lyrics keeps a rather simple tune interesting. A real treat of this recording is Roll's selection of guest guitarist Chris Casello. Arguably the best guitarist in town, Casello is known for his flat out high octane guitar runs and dynamite improvisational skills. Getting him to reign in his exuberance might be a problem for a producer. Roll says, "Both Alana (Rocklin) and Chris (Casello) were new to my music. So instead of rehearsing and rehearsing until they became bored with the material to the point where they 'd start to embellish it, we captured them on tape real early. The results still shows their great ents, but it supports my tunes more than overwhelms them." You can hearCasello's tasty licks throughout the record. Pay particular attention to his surf guitar work on "She Said," and his hallmark rockabilly country pickin' on "My Savior." Both are first rate. My favorite tune is "Backseat," a funky slow-groove lament about some poor dude riding in the backseat of a car ("Who is that guy up there any ways?") while his unobtainable dream person is in the front. The lyrics are hilarious: "Let me ride up frontTil be your boyl' 11 read the map and fill the car up with gas ... I'll hang on your arm. Let me ride up front." Along side these provocative lyrics Timmy "pizza" Monger plays a funk accordion that establishes perfectly the adolescent angst of the song. Funny yet reminiscently chilly, surely we've all been in the backseat at one time or another. Another strong element in this recording is its musical diversity. At times we hear the instrumentation of REM coupled with the vocal inflections of Loudan Wainwright ("This Time"); other times we hear Dylan's guitar work coupled with an early Neil Young's vocal whinings ("Ready to Hang" and especially "Doublé Time"); still other times the slow acoustic guitar work perfectly covers the low mournful sound of Leonard Cohen ("She Said"). Though these sounds and influences are hinted at throughout, Roll's tunes are not derivations of other works. The real joy of this recording is how Roll makes these influences merely ephemeral. It is instead his lasting lyrical talent, his musical ear that impresses. I'd suggest that you send all your close musical friends a late holiday present this season. Wait until February when this great recording comes out. They will doubly thank you!