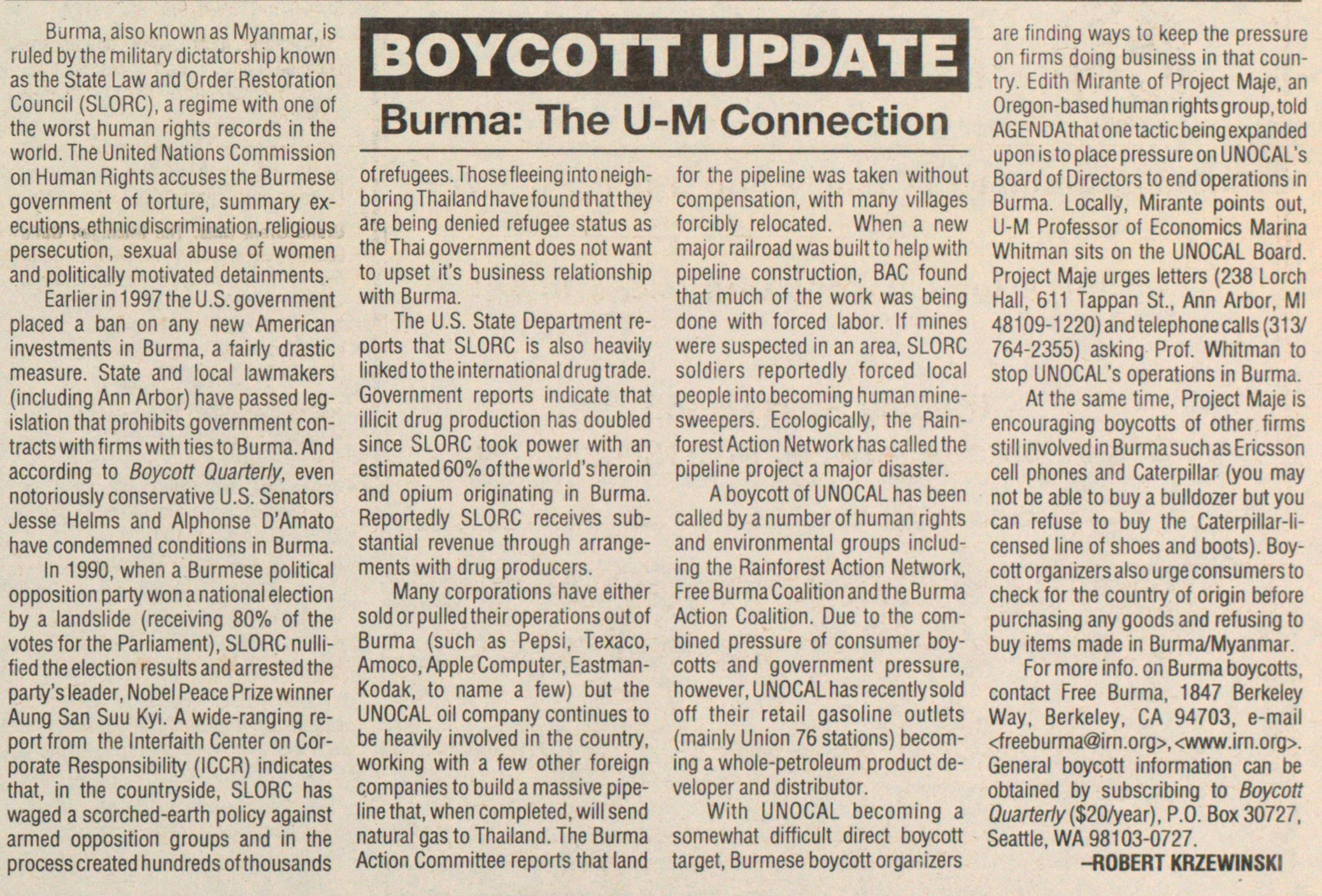 Bürma, aiso known as Myanmar, s ruled by the military dictatorship known as the State Law and Order Restoration Council (SLORC), a regime with one of the worst human rights records in the world. The United Nations Commission on Human Rights accuses the Burmese government of torture, summary executíons.ethnic discriminaron, religious persecution, sexual abuse of women and politically motivated detainments. Earlier in 1 997 the U.S. government placed a ban on any new American nvestments in Burma, a fairly drastic measure. State and local lawmakers (including Ann Arbor) have passed legslation that prohibits government contracts with firms with ties to Burma. And according to Boycott Quarterly, even notoriouslyconservative U.S. Senators Jesse Helms and Alphonse D'Amato have condemned conditions in Burma. In 1990, when a Burmese politica! opposition party won a national election by a landslide (receiving 80% of the votes for the Parliament), SLORC nullified the election results and arrested the party's leader, Nobel Peace Prize winner Aung San Suu Kyi. A wide-ranging report f rom the Interfaith Center on Corporate Responsibility (ICCR) indicates that, in the countryside, SLORC has waged a scorched-earth policy against armed opposition groups and in the processcreatedhundredsofthousands of ref ugees. Those f leeing nto neighboring Thailand have foundthatthey are being denied refugee status as the Thai government does not want to upset it's business relationship with Burma. The U.S. State Department reports that SLORC is also heaviiy linked to the international drug trade. Government reports indicate that illicit drug production has doubled since SLORC took power with an estimated 60% of the world's heroin and opium originating in Burma. Reportedly SLORC receives substantial revenue through arrangements with drug producers. Many corporations have either soldor pulled theiroperations out of Burma (such as Pepsi, Texaco, Amoco, Apple Computer, EastmanKodak, to name a few) but the UNOCAL oil company continúes to be heaviiy involved in the country, working with a few other foreign companies to build a massive pipeline that, when completed, will send natural gas to Thailand. The Burma Action Committee reports that land for the pipeline was taken without compensation, with many villages torcibly relocated. When a new major railroad was built to help with pipeline construction, BAC found that much of the work was being done with torced labor. If mines were suspected in an área, SL0RC soldiers reportedly forced local people into becoming human minesweepers. Ecologically, the Rainforest Action Network has called the pipeline project a major disaster. A boycott of UNOCAL has been called by a number of human rights and environmental groups including the Rainforest Action Network, Free Burma Coalition and the Burma Action Coalition. Due to the combined pressure of consumer boycotts and government pressure, however, UNOCAL has recently sold off their retail gasoline outlets (mainly Union 76 stations) becoming a whole-petroleum product developer and distributor. With UNOCAL becoming a somewhat difficult direct boycott target, Burmese boycott organizers are finding ways to keep the pressure on firms doing business n that country. Edith Mirante of Project Maje, an Oregon-based human rights group, told AGENDA that one tactic being expanded upon is to place pressure on UNOCAL's Board of Directors to end operations in Burma. Locally, Mirante points out, U-M Professor of Economics Marina Whitman sits on the UNOCAL Board. Project Maje urges letters (238 Lorch Hall, 611 Tappan St., Ann Arbor, Ml 48109-1 220) and telephone calis (313 764-2355) asking Prof. Whitman to stop UNOCAL's operations in Burma. At the same time, Project Maje is encouraging boycotts of other firms still involved in Burmasuchas Ericsson cell phones and Caterpillar (you may not be able to buy a bulldozer but you can refuse to buy the Caterpillar-licensed line of shoes and boots). Boycott organizers also urge consumers to check for the country of origin before purchasing any goods and refusing to buy items made in BurmaMyanmar. For more info. on Burma boycotts, contact Free Burma, 1847 Berkeley Way, Berkeley, CA 94703, e-mail freeburma@irn.org, www.irn.org. General boycott information can be obtained by subscribing to Boycott Quarterly ($20year), P.O. Box 30727, Seattle. WA 98103-0727.