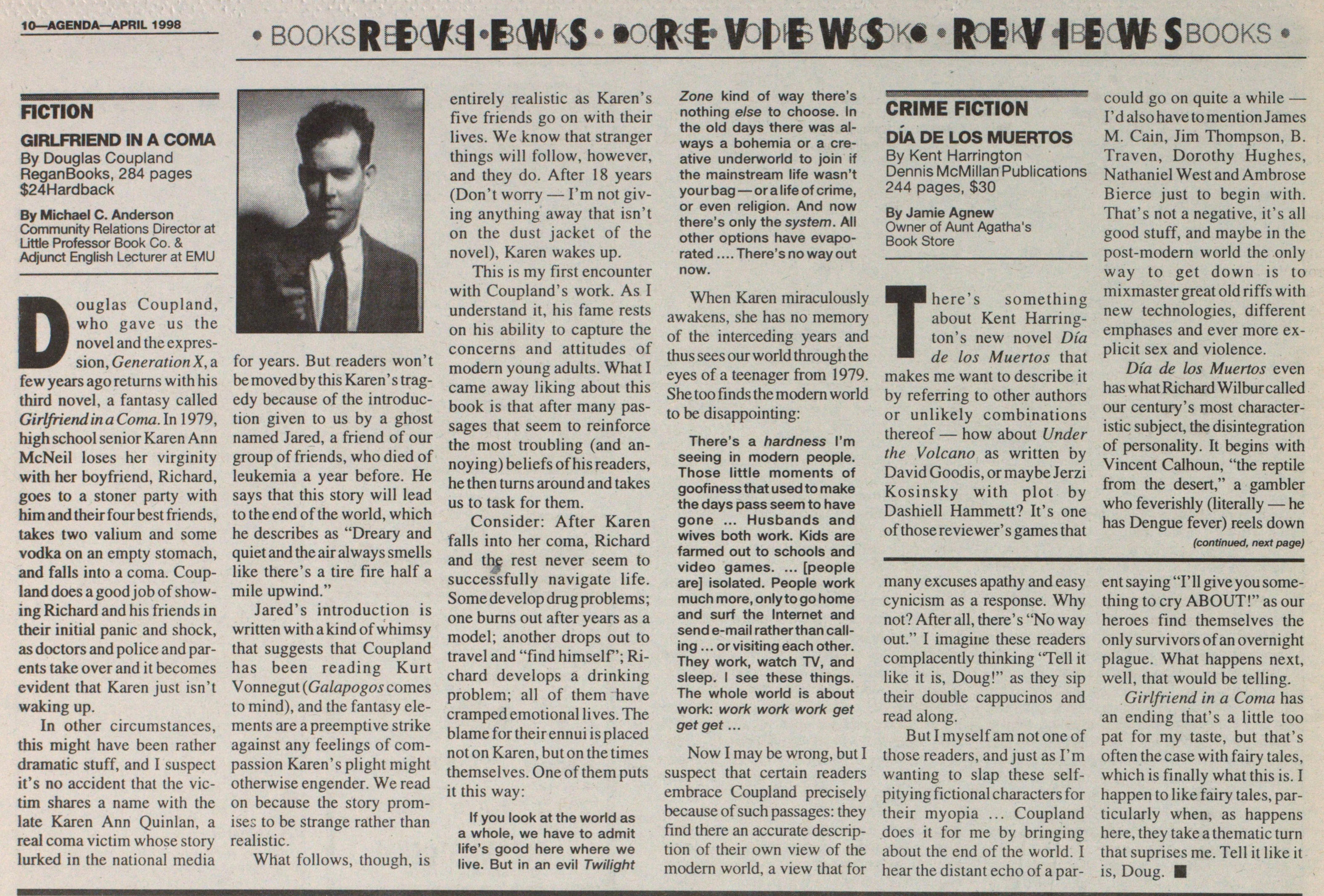 GIRLFRIEND IN A COMA By Douglas Coupland ReganBooks, 284 pages $24Hardback Communrty Relations Director at Little Professor Book Co. & Adjunct English Lecturer at EMU Douglas Coupland, who gave us the novel and the expression, Generation X, a few years ago returns with his third novel, a fantasy called Girlfriendin a Coma. In 1 979, high school senior Karen Ann McNeil loses her virginity with her boyfriend, Richard, goes to a stoner party with him and their four best friends, takes two valium and some vodka on an empty stomach, and falls into a coma. Coupland does a good jobofshowing Richard and his friends in their initial panic and shock, as doctors and pólice and parents take over and it becomes evident that Karen just isn't waking up. In other circumstances, this might have been rather dramatic stuff, and I suspect it's no accident that the victim shares a name with the late Karen Ann Quinlan, a real coma victim whose story lurked in the national media for years. But readers won't be moved by this Karen ' s tragedy because of the introduction given to us by a ghost named Jared, a friend of our group of friends, who died of leukemia a year before. He says that this story will lead to the end of the world, which he describes as "Dreary and quiet and the air al ways smells like there's a tire fire half a mile upwind." Jared's introduction is written with a kind of whimsy that suggests that Coupland has been reading Kurt Vonnegut {Galapogos comes to mind), and the fantasy elements are a preemptive strike against any feelings of compassion Karen ' s plight might otherwise engender. We read on because the story promises to be strange rather than realistic. What follows, though, is entirely realistic as Karen's five friends go on with their lives. We know that stranger things will follow, however, and they do. After 18 years (Don't worry - I'm not giving anything away that isn't on the dust jacket of the novel), Karen wakes up. This is my first encounter with Coupland's work. As I understand it, his fame rests on his ability to capture the concerns and attitudes of modern young adults. What I came away liking about this book is that after many passages that seem to reinforce the most troubling (and annoying)beliefs of his readers, he then turns around and takes us to task for them. Consider: After Karen falls into her coma, Richard and th rest never seem to successfully navigate life. Some develop drug problems; one burns out after years as a model; another drops out to travel and "find himself '; Richard develops a drinking problem; all of them have cramped emotional lives. The blame for their ennui is placed not on Karen, but on the times themselves. One of them puts it this way: If you look at the world as a whoie, we have to admit life's good here where we live. But in an evil Twilight Zone kind of way there's nothing ese to choose. In the old days there was always a bohemia or a creative underworld to join if the mainstream life wasn't your bag - ora life of crime, or even religión. And now there's only the system. All other options have evaporated .... There's no way out now. When Karen miraculously awakens, she has no memory of the interceding years and thus sees our world through the eyes of a teenager ftom 1979. She too finds the modern world to be disappointing: There's a hardness l'm seeing in modern people. Those little moments of goof mess that u sed to make the days pass seem to have gone ... Husbands and wives both work. Kids are farmed out to schools and video games. ... [people are] isolated. People work much more, only to go home and surf the Internet and send e-mail ratherthan calling . . . or visiting each other. They work, watch TV, and sleep. I see these things. The whole world is about work: work work work get getget ... Now I may be wrong, but I suspect that certain readers embrace Coupland precisely because of such passages: they find there an accurate description of their own view of the modern world, a view that for many excuses apathy and easy cynicism as a response. Why not? After all, there's "No way out." I imagine these readers complacently thinking 'Teil it like it is, Doug!" as they sip their doublé cappucinos and read along. But I myself am not one of those readers, and just as I'm wanting to slap these selfpitying fictional characters for their myopia ... Coupland does it for me by bringing about the end of the world. I hear the distant echo of a ent saying 'TU give you something to cry ABOUT!" as our héroes find themselves the only survivors of an overnight plague. What happens next, well, that would be telling. Girlfriend in a Coma has an ending that's a little too pat for my taste, but that's often the case with fairy tales, which is finally what this is. I happen to like fairy tales, particularly when, as happens here, they take a thematic turn that suprises me. Tell it like it is, Doug. ■