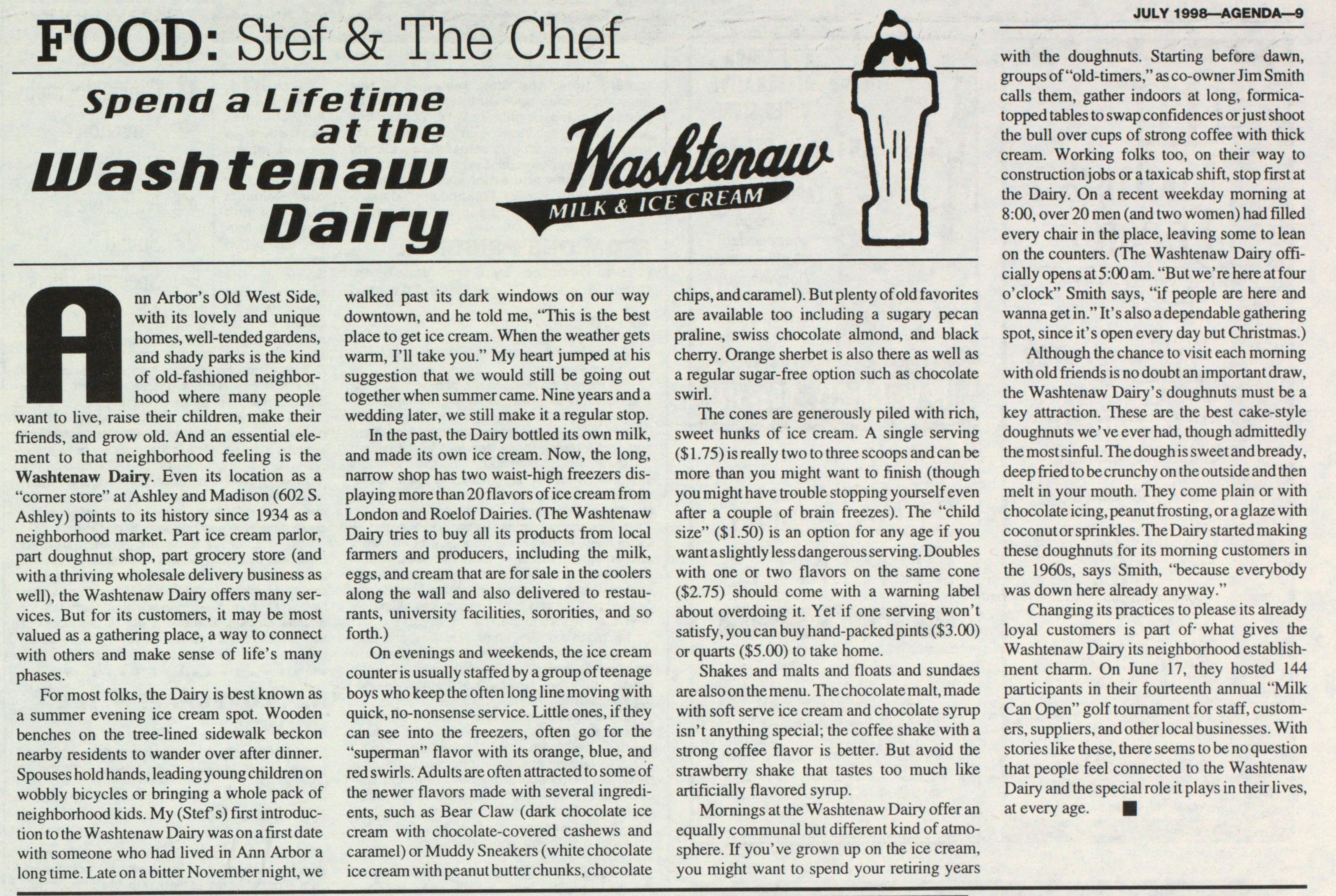 win i il M n i ii nnn Arbor's Old West Side, with its lovely and unique homes, well-tended gardens, and shady parks is the kind of old-fashioned neighborhood where many people want to live, raise their children, make their friends, and grow old. And an essential element to that neighborhood feeling is the Washtenaw Dairy. Even its location as a "corner store" at Ashley and Madison (602 S. Ashley) points to its history since 1934 as a neighborhood market. Part ice cream parlor, part doughnut shop, part grocery store (and with a thriving wholesale delivery business as well), the Washtenaw Dairy offers many services. But for its customers, it may be most valued as a gathering place, a way to connect with others and make sense of life's many phases. For most folks, the Dairy is best known as a summer evening ice cream spot. Wooden benches on the tree-lined sidewalk beckon nearby residents to wander over after dinner. Spouses hold hands, leading young children on wobbly bicycles or bringing a whole pack of neighborhood kids. My (Stef s) first introduction to the Washtenaw Dairy was on a first date with someone who had lived in Ann Arbor a long time. Late on a bitter November night, we walked past its dark windows on our way downtown, and he told me, "This is the best place to get ice cream. When the weather gets warm, 111 take you." My heart jumped at his suggestion that we would still be going out together when summer carne. Nine years and a wedding later, we still make it a regular stop. In the past, the Dairy bottled its own milk, and made its own ice cream. Now, the long, narrow shop has two waist-high freezers display ing more than 20 flavors of ice cream from London and Roelof Dairies. (The Washtenaw Dairy tries to buy all its producís from local farmers and producers, including the milk, eggs, and cream that are for sale in the coolers along the wall and also delivered to restaurants, university facilities, sororities, and so forth.) On evenings and weekends, the ice cream counter is usually staffed by a group of teenage boys who keep the often long line moving with quick, no-nonsense service. Little ones, if they can see into the freezers, often go for the "superman" flavor with its orange, blue, and red swirls. Adults are often attracted to some of the newer flavors made with several ingredients, such as Bear Claw (dark chocolate ice cream with chocolate-covered cashews and caramel) or Muddy Sneakers (white chocolate ice cream with peanut butter chunks, chocolate chips, and caramel). But plenty of old favorites are available too including a sugary pecan praline, swiss chocolate almond, and black cherry. Orange sherbet is also there as well as a regular sugar-free option such as chocolate swirl. The cones are generously piled with rich, sweet hunks of ice cream. A single serving ($ 1 .75) is really two to three scoops and can be more than you might want to finish (though you might have trouble stopping yourself even after a couple of brain freezes). The "child size" ($1.50) is an option for any age if you want aslightly less dangerous serving. Doubles with one or two flavors on the same cone ($2.75) should come with a warning label about overdoing it. Yet if one serving won't satisfy, you can buy hand-packed pints ($3.00) or quarts ($5.00) to take home. Shakes and malts and floats and sundaes are also on the menu. The chocolate malt, made with soft serve ice cream and chocolate syrup isn't anything special; the coffee shake with a strong coffee flavor is better. But avoid the strawberry shake that tastes too much like artificially flavored syrup. Mornings at the Washtenaw Dairy offer an equally communal but different kind of atmosphere. If you've grown up on the ice cream, you might want to spend your retiring years with the doughnuts. Starting before davvn, groups of "old-timers," as co-owner Jim Smith calis them, gather indoors at long, formicatopped tables to swap confidences or just shoot the buil over cups of strong coffee with thick cream. Working folks too, on their way to construction jobs or a taxicab shift, stop first at the Dairy. On a recent weekday morning at 8:00, over 20 men (and two women) had filled every chair in the place, leaving some to lean on the counters. (The Washtenaw Dairy officially opens at 5 :00 am. "But we' re here at four o'clock" Smith says, "if people are here and wanna get in." It's also adependable gathering spot, since it's open every day but Christmas.) Although the chance to visit each morning with old friends is no doubt an important draw, the Washtenaw Dairy's doughnuts must be a key attraction. These are the best cake-style doughnuts we' ve ever had, though admittedly the most sinful. The dough is sweet and bready , deep fried to be crunchy on the outside and then melt in your mouth. They come plain or with chocolate icing, peanut frosting, ora glaze with coconut or sprinkles. The Dairy started making these doughnuts for its morning customers in the 1960s, says Smith, "because everybody was down here already any way." Changing its practices to please its already loyal customers is part what gives the Washtenaw Dairy its neighborhood establishment charm. On June 17, they hosted 144 participants in their fourteenth annual "Milk Can Open" golf tournament for staff, customers, suppliers, and other local businesses. With stories like these, there seems to be no question that people feel connected to the Washtenaw Dairy and the special role it plays in their lives, at every age. ■