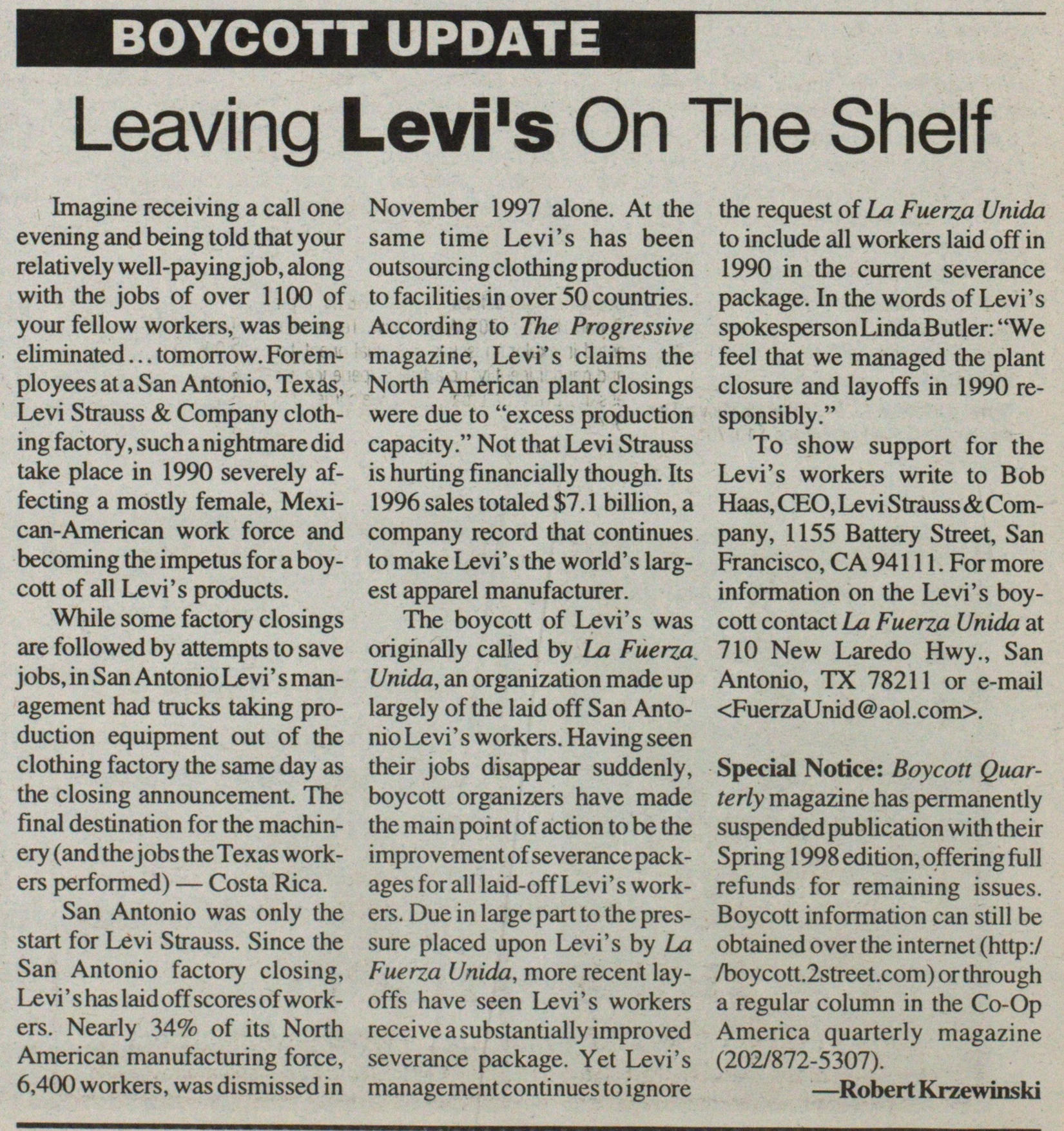 Imagine receiving a cali one evening and being told that your relatively well-paying job, along with the jobs of over 1 100 of your fellow workers, was being eliminated ... tomorrow. For employees at a San Antonio, Texas, Levi Strauss & Company clothing factory , such a nightmare did take place in 1990 severely affecting a mostly female, Mexican-American work force and becoming the Ímpetus for a boycott of all Levi 's products. While some factory closings are followed by attempts to save jobs, in San Antonio Levi ' s management had trucks taking production equipment out of the clothing factory the same day as the closing announcement. The final destination for the machinery (and the jobs the Texas workers performed) - Costa Rica. San Antonio was only the start for Levi Strauss. Since the San Antonio factory closing, Levi ' s has laid off scores of workers. Nearly 34% of its North American manufacturing force, 6,400 workers, was dismissed in November 1997 alone. At the same time Levi's has been outsourcing clothing production to facilities in over 50 countries. According to The Progressive magazine, Levi's claims the North American plant closings were due to "excess production capacity." Not that Levi Strauss is hurting financially though. lts 1996 sales totaled $7. 1 billion, a company record that continúes to make Levi's the world's largest apparel manufacturen The boycott of Levi's was originally called by La Fuerza Unida, an organization made up largely of the laid off San Antonio Levi 's workers. Havingseen their jobs disappear suddenly, boycott organizers have made the main point of action to be the improvement of severance packages for all laid-off Levi's workers. Due in large part to the pressure placed upon Levi's by La Fuerza Unida, more recent layoffs have seen Levi's workers recei ve a substantially improved severance package. Yet Levi's managementcontinues to ignore the request of La Fuerza Unida to include all workers laid off in 1990 in the current se veranee package. In the words of Levi's spokesperson Linda Butler: "We feel that we managed the plant closure and layoffs in 1990 responsibly." To show support for the Levi's workers write to Bob Haas, CEO, Levi Strauss & Company, 1155 Battery Street, San Francisco, CA 941 1 1 . For more information on the Levi's boycott contact La Fuerza Unida at 710 New Laredo Hwy., San Antonio, TX 78211 or e-mail FuerzaUnid@aol.com. Special Notice: Boycott Quarterly magazine has permanently suspended publication with their Spring 1998edition,offeringfull refunds for remaining issues. Boycott information can still be obtained over the internet (http: boycott.2street.com) orthrough a regular column in the Co-Op America quarterly magazine (202872-5307).