Manuel Bound Over For Sept 12 Hearing 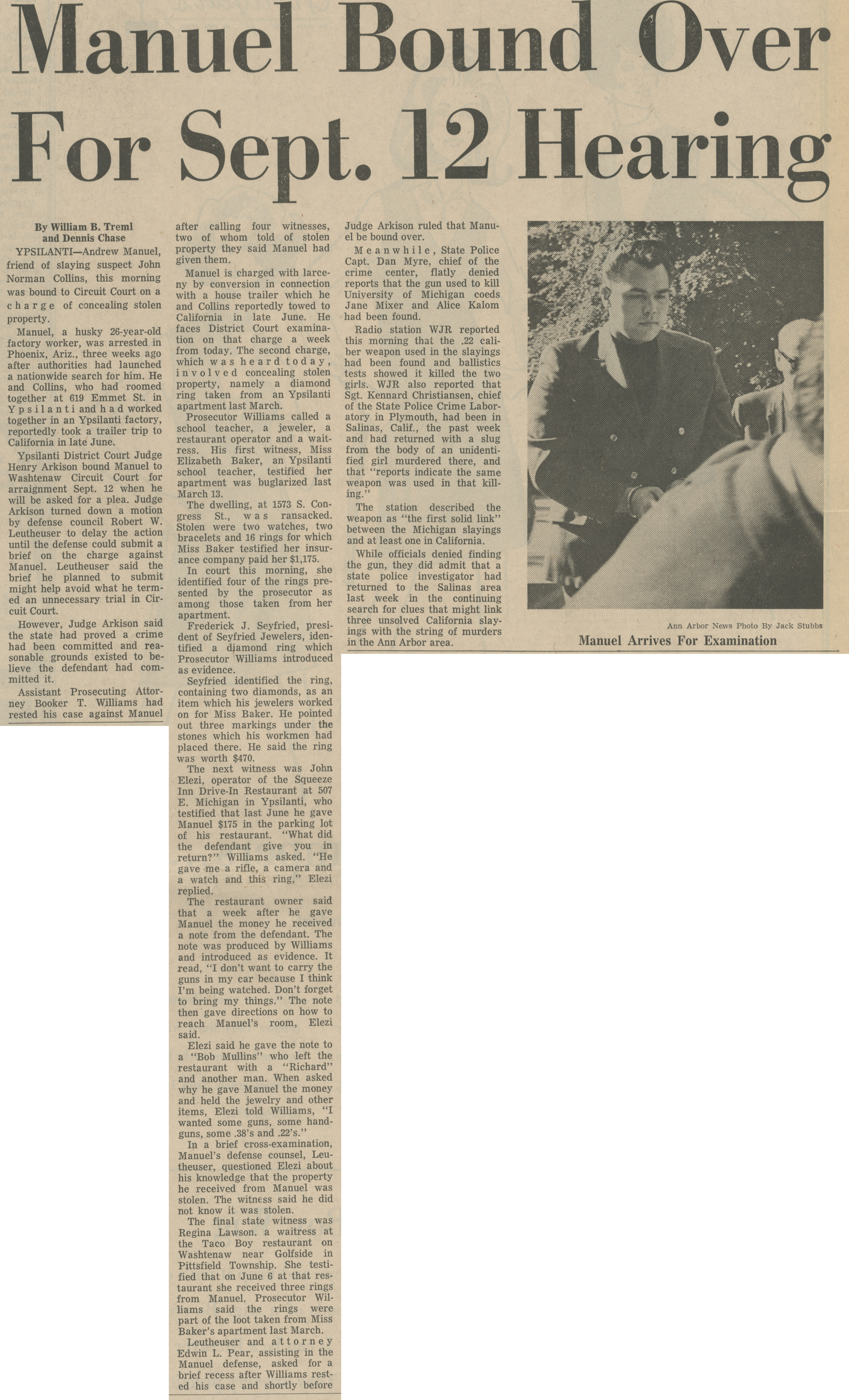 ﻿Manuel Bound Over For Sept. 12 Hearing

By William B. Treml and Dennis Chase

YPSILANTI—Andrew Manuel, friend of slaying suspect John Norman Collins, this morning was bound to Circuit Court on a charge of concealing stolen property.

Manuel, a husky 26-year-old factory worker, was arrested in Phoenix, Ariz., three weeks ago after authorities had launched a nationwide search for him. He and Collins, who had roomed together at 619 Emmet St. in Ypsilanti  and had worked together in an Ypsilanti factory, reportedly took a trailer trip to California in late June.

Ypsilanti District Court Judge Henry Arkison bound Manuel to Washtenaw Circuit Court for arraignment Sept. 12 when he will be asked for a plea. Judge Arkison turned down a motion by defense council Robert W. Leutheuser to delay the action until the defense could submit a brief on the charge against Manuel. Leutheuser said the brief he planned to submit might help avoid what he termed an unnecessary trial in Circuit Court.

However, Judge Arkison said the state had proved a crime had been committed and reasonable grounds existed to believe the defendant had committed it.

Assistant Prosecuting Attorney Booker T. Williams had rested his case against Manuel after calling four witnesses, two of whom told of stolen property they said Manuel had given them.

Manuel is charged with larceny by conversion in connection with a house trailer which he and Collins reportedly towed to California in late June. He faces District Court examination on that charge a week from today. The second charge, which was heard today, involved concealing stolen property, namely a diamond ring taken from an Ypsilanti apartment last March.

The dwelling, at 1573 S. Congress St., was ransacked. Stolen were two watches, two bracelets and 16 rings for which Miss Baker testified her insurance company paid her $1,175.

In court this morning, she identified four of the rings presented by the prosecutor as among those taken from her apartment.

Seyfried identified the ring, containing two diamonds, as an item which his jewelers worked on for Miss Baker. He pointed out three markings under the stones which his workmen had placed there. He said the ring was worth $470.

The next witness was John Elezi, operator of the Squeeze Inn Drive-In Restaurant at 507 E. Michigan in Ypsilanti, who testified that last June he gave Manuel $175 in the parking lot of his restaurant. “What did the defendant give you in return?’’ Williams asked. “He gave me a rifle, a camera and a watch and this ring,” Elezi replied.

The restaurant owner said that a week after he gave Manuel the money he received a note from the defendant. The note was produced by Williams and introduced as evidence. It read, “I don’t want to carry the guns in my car because I think I’m being watched. Don’t forget to bring my things.” The note then gave directions on how to reach Manuel’s room, Elezi said.

Elezi said he gave the note to a “Bob Mullins” who left the restaurant with a “Richard” and another man. When asked why he gave Manuel the money and held the jewelry and other items, Elezi told Williams, “I wanted some guns, some handguns, some .38’s and .22’s.”

In a brief cross-examination, Manuel’s defense counsel, Leutheuser, questioned Elezi about his knowledge that the property he received from Manuel was stolen. The witness said he did not know it was stolen.

The final state witness was Regina Lawson, a waitress at the Taco Boy restaurant on Washtenaw near Golfside in Pittsfield Township. She testified that on June 6 at that restaurant she received three rings from Manuel. Prosecutor Williams said the rings were part of the loot taken from Miss Baker’s apartment last March.

Leutheuser and attorney Edwin L. Pear, assisting in the Manuel defense, asked for a brief recess after Williams rested his case and shortly before

Judge Arkison ruled that Manuel be bound over.

Radio station WJR reported this morning that the .22 caliber weapon used in the slayings had been found and ballistics tests showed it killed the two girls. WJR also reported that Sgt. Kennard Christiansen, chief of the State Police Crime Laboratory in Plymouth, had been in Salinas, Calif., the past week and had returned with a slug from the body of an unidentified girl murdered there, and that “reports indicate the same weapon was used in that killing.”

The station described the weapon as “the first solid link” between the Michigan slayings and at least one in California.

While officials denied finding the gun, they did admit that a state police investigator had returned to the Salinas area last week in the continuing search for clues that might link three unsolved California slayings with the string of murders in the Ann Arbor area.