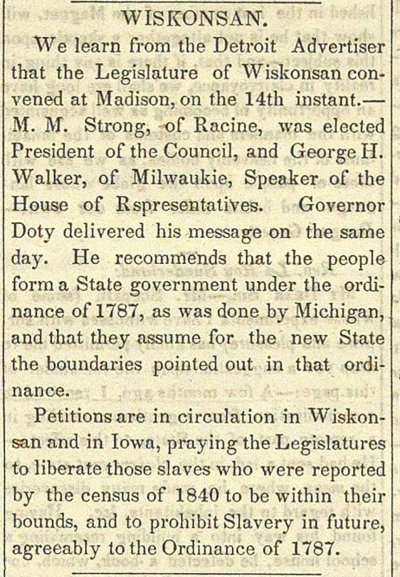 We learn from the Detroit Advertiser that the Legislature of Wiskonsan convened at Madison, on the 14th instant. - M. Ai. Strong, of Racine, was elected President of the Council, and George H. Walker, of Mihvaukie, Speaker of the House of RspresentatiVes. Governor Doty delivered his message on the sarne day. He recomrnÃ©nds that the people form a State government under the ordinance of 1787, as was done by Michigan, and that they assume for the new State the boundaries pointed out in that ordinance. Petitionsare in circulation in Wiskonsan and in Iowa, praying the Legislatures to libÃ©rate those slaves who were reported by the census of 1840 to be within their bounds, and to prohibit Slavery in future, agreeably to the Ordinance of 1787.