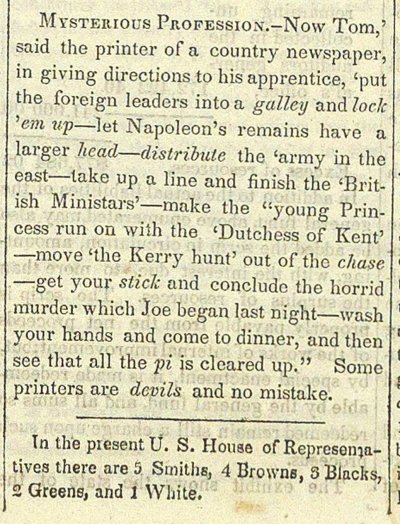 -Now Tom,'said the printer of a country newspaper, in giving directions to his apprentice, 'put the foreigÃ¼ leaders into a galley and hek em wp- let Napoleon's remains have a larger head-distributc the 'army in the east- take up a line and finish the 'British Ministars'- make the c:young Princess run on wilh the Dutchess of Kent' -move 'the Kerry hunt' out of the chase -get your stick and conclude the horrid murder wtÃ³ch Ã­oe began last night - wash your hands and come to dinner, and then see that all the pi is cleared up." Some printers are devils and no mistake. In the piesentÃ. S. House of Representatives there are 5 Sinitlis, 4 Browns, S Blacks, SGreens, and l White.