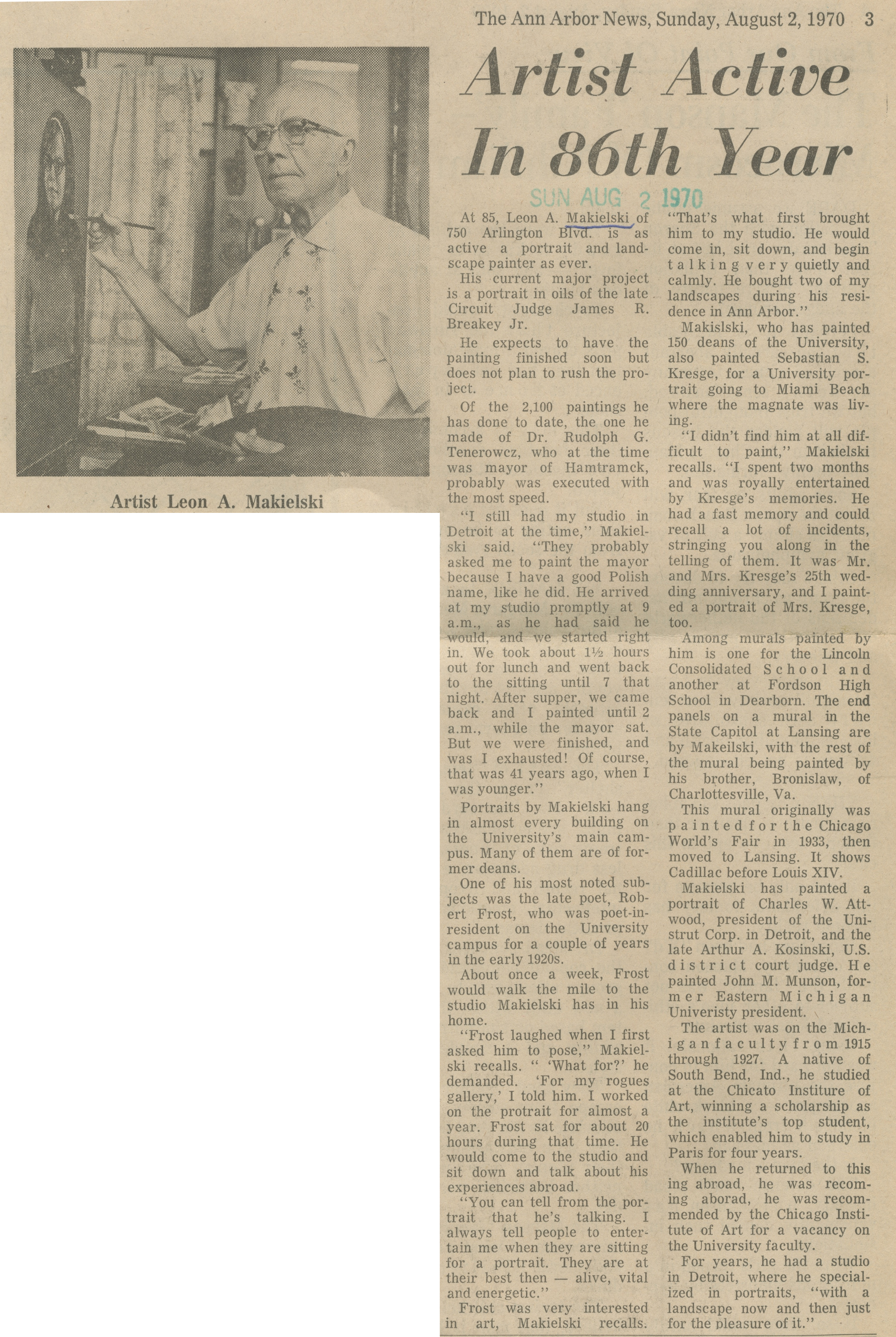 At 85, Leon A. Makielski of 750 Arlington Blvd. is as active a portrait and landscape painter as ever.

His current major project is a portrait in oils of the late Circuit Judge James R. Breakey Jr.

He expects to have the painting finished soon but does not plan to rush the project.

Of the 2,100 paintings he has done to date, the one he made of Dr. Rudolph G. Tenerowcz, who at the time was mayor of Hamtramck, probably was executed with the most speed.

“I still had my studio in Detroit at the time,” Makielski said. “They probably asked me to paint the mayor because I have a good Polish name, like he did. He arrived at my studio promptly at 9 a.m., as he had said he would, and we started right in. We took about 1½ hours out for lunch and went back to the sitting until 7 that night. After supper, we came back and I painted until 2 a.m., while the mayor sat. But we were finished, and was I exhausted! Of course, that was 41 years ago, when I was younger.”

Portraits by Makielski hang in almost every building on the University’s main campus. Many of them are of former deans.

One of his most noted subjects was the late poet, Robert Frost, who was poet-in-resident on the University campus for a couple of years in the early 1920s.

About once a week, Frost would walk the mile to the studio Makielski has in his home.

“Frost laughed when I first asked him to pose,” Makielski recalls. “ ‘What for?’ he demanded. ‘For my rogues gallery,’ I told him. I worked on the portrait for almost a year. Frost sat for about 20 hours during that time. He would come to the studio and sit down and talk about his experiences abroad.

“You can tell from the portrait that he's talking. I always tell people to entertain me when they are sitting for a portrait. They are at their best then — alive, vital and energetic.”

Frost was very interested in art, Makielski recalls.
“That’s what first brought him to my studio. He would come in, sit down, and begin talking very quietly and calmly. He bought two of my landscapes during his residence in Ann Arbor.”

Makislski, who has painted 150 deans of the University, also painted Sebastian S. Kresge, for a University portrait going to Miami Beach where the magnate was living.

“I didn’t find him at all difficult to paint,” Makielski recalls. “I spent two months and was royally entertained by Kresge’s memories. He had a fast memory and could recall a lot of incidents, stringing you along in the telling of them. It was Mr. and Mrs. Kresge’s 25th wedding anniversary, and I painted a portrait of Mrs. Kresge, too.

Among murals painted by him is one for the Lincoln Consolidated School and another at Fordson High School in Dearborn. The end panels on a mural in the State Capitol at Lansing are by Makeilski, with the rest of the mural being painted by his brother, Bronislaw, of Charlottesville, Va.

This mural originally was painted for the Chicago World’s Fair in 1933, then moved to Lansing. It shows Cadillac before Louis XIV.

The artist was on the Michigan faculty from 1915 through 1927. A native of South Bend, Ind., he studied at the Chicago Institute of Art, winning a scholarship as the institute’s top student, which enabled him to study in Paris for four years.

When he returned to this recoming abroad, he was recommended by the Chicago Institute of Art for a vacancy on the University faculty.

For years, he had a studio in Detroit, where he specialized in portraits, “with a landscape now and then just for the pleasure of it.”