Time Running Out For Wonder Bar 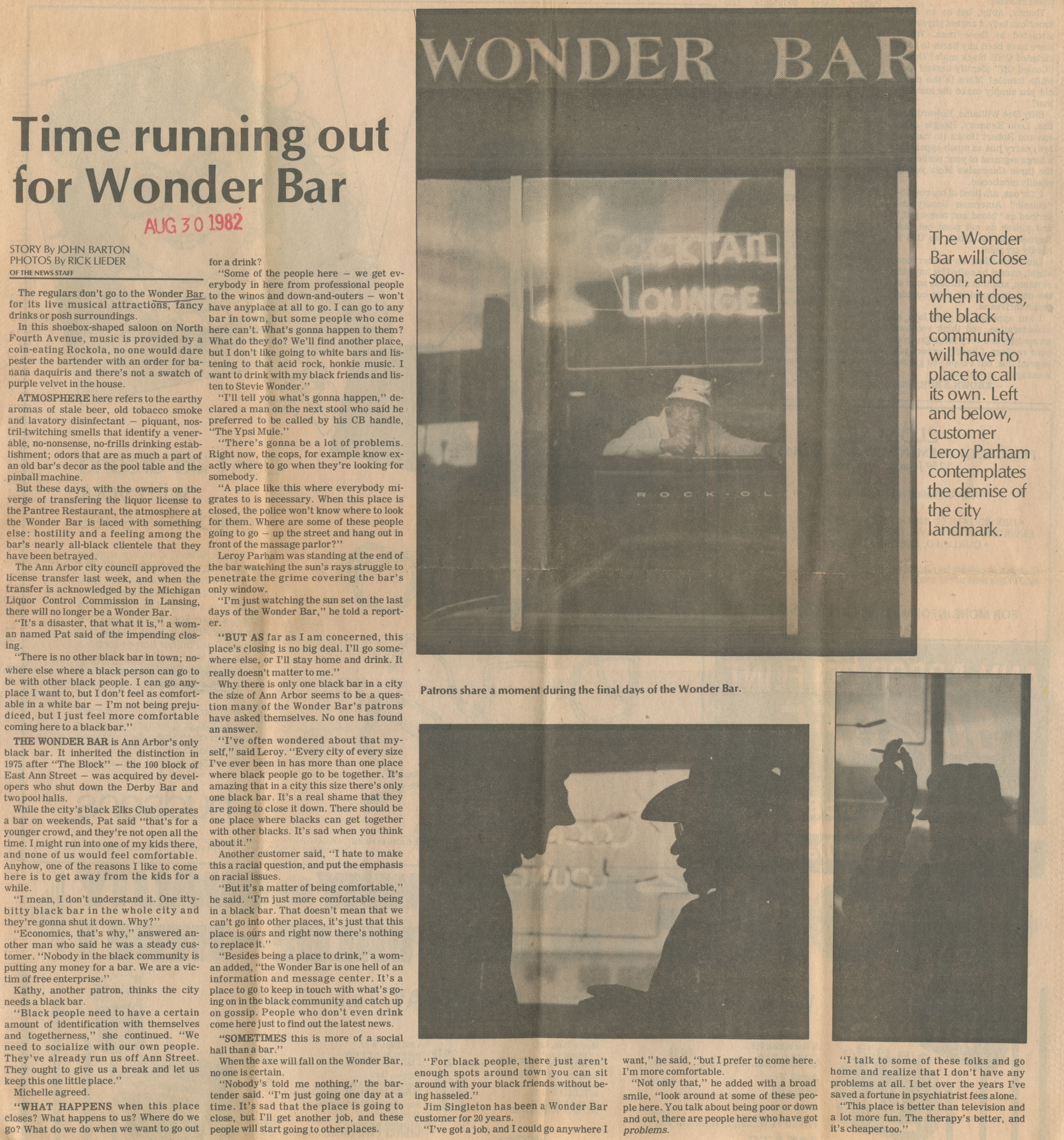 Time running out for Wonder Bar

The regulars don't go to the Wonder Bar for its live musical attractions, fancy drinks or posh surroundings.

In this shoe-boxed shaped saloon on North Fourth Avenue, music is provided by a coin-eating Rockola, no one would dare pester the bartender with an order for banana daquiris and there's not a swatch of purple velvet in the house.

ATMOSPHERE here refers to the earthy aromas of stale beer, old tobacco smoke and lavatory disinfectant – piquant, nostril-twirling smells that identify a venerable, no-nonsense, no-frills drinking establishment; odors that are as much a part of an old bar's decor as the pool table and the pinball machine.

But these days, with the owners on the verge of transferring the liquor license to the Pantree Restaurant, and the atmosphere at the Wonder Bar is laced with something else: hostility and a feeling among the bar's nearly all-black clientele that they have been betrayed.

The Ann Arbor city council approved the license transfer last week, and when the transfer is acknowledged by the Michigan Liquor Control Commission in Lansing, there will no longer be a Wonder Bar.

"It's a disaster, that's what it is," a woman named Pat said of the impending closing.

"There is no other black bar in town; nowhere else where a black person can go to be with other black people. I can go anyplace I want to, but I don't feel as comfortable. Anyhow, one of the reasons I like to come here is to get away from the kids for a while.

"I mean, I don't understand it. One itty-bitty black bar in the whole city and they're gonna shut it down. Why?"

"Economics,  that's why," answered another man who said he was a steady customer. "Nobody in the black community is putting any money for a bar. We are a victim of free enterprise."

Kathy, another patron, thinks the city needs a black bar.

"Black people need to have a certain amount of identification with themselves and togetherness," she continued. "We need to socialize with our own people. They're already run us off Ann Street. They ought to give us a break and let us keep this one little place. "

"WHAT HAPPENS when this place closes? What happens to us? Where do we go? What do we do when we want to go out for a drink?"

"Some of these people here – we get everybody in here from professional people to the winos and the down-and-outers – won't have anyplace at all to go. I can go to any bar in town, but some people who come here can't. What's gonna happen to them? We'll find another place, but I don't like going to white bars and listening to acid rock, honkie music. I want to drink with my black friends and listen to Stevie Wonder."

"I'll tell you what's gonna happen," declared a man on the next stool who said he preferred to be called by his CB handle "The Ypsi Mule."

"There's gonna be a lot of problems. Right now, the cops, for example know exactly where to go when they're looking for somebody.

A place like this where everybody migrates is necessary. When this place is closed, the police won't know where to look for them. Where are some of these people going to go – up the street and hang out in front of the massage parlor?"

Leroy Parham was standing at the end of the bar watching the sun's rays struggle to penetrate the grime covering the bar's only window.

"I'm just watching the sun set on the last days of the Wonder Bar," he told a reporter.

"BUT AS far as I am concerned, this place's closing is no big deal. I'l go somewhere else, or I'll stay home and drink. It doesn't matter to me."

Why there is only one black bar in a city the size of Ann Arbor seems to be a question many of the Wonder Bar's patrons have asked themselves.

"I've often wondered about that myself," said Leroy. "Every city of every size I've ever been in has more than one place where black people go to be together. It's amazing that in a  city this size there's only one black bar. It's a real shame that they are going to close it down. There should be one place where blacks can get together with other blacks. It's sad when you think about it."

Another customer said, "I hate to make this a racial question, and put the emphasis on racial issues.

"But it's a matter of being comfortable," he said. "I'm more comfortable being in a black bar. That doesn't mean that we can't go to other places, it's just that this place is ours and right now there's nothing to replace it."

"Besides being a place to drink," a woman added, "the Wonder Bar is one hell of an information and message center. It's a place to go to keep in touch with what's going on in the black community and catch up on gossip. People who don't even drink come here just to find out the latest news.

"SOMETIMES this is more of a social hall than a bar."

When the axe will fall on the Wonder Bar, no one is certain.

"Nobody's told me nothing," the bartender said. "I'm just going one day at a time. It's sad that the place is going to close, but I'll get another job, and these people will start going to other places.

"For black people, there just aren't enough spots around town you can sit around with your black friends without being hasseled."

Jim Singleton has been a Wonder Bar customer for 20 years.

"I've got a job, and I could go anywhere I want," he said, "but I prefer to come here. I'm more comfortable.

"Not only that," he added with a broad smile, "look around at some of these people here. You talk about being poor or down and out, there are people here who have got problems.

"I talk to some of these folks and and go home and realize that I don't have any problems at all. I bet over the years I've saved a fortune in psychiatrist fees alone.

"This place is better than television and a lot more fun. The therapy's better, and cheaper too."

The Wonder Bar will close soon, and when it does, the black community will have no place to call its own. Left and below, customer Leroy Parham contemplates the demise of the city landmark.

Patrons share a moment during the final days of the Wonder Bar.