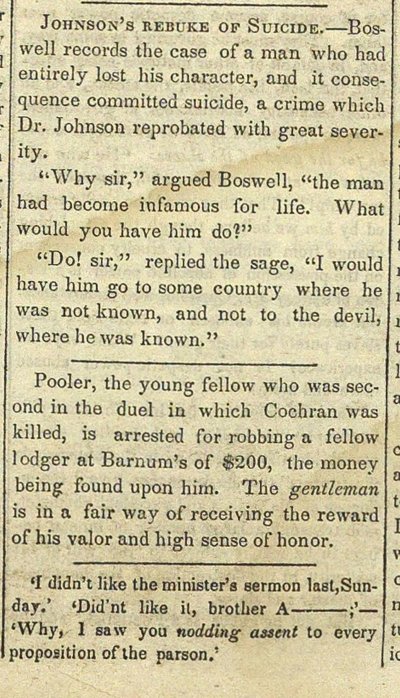 well records the case of a man who had entirely lost his character, and it consequence committed suicide, a crime which Dr. Johnson reprobated with great severity. "Why sir," argued BosweH, the man had becorne infamous for life. What would you have him do?" "Do! sir," replied the sage, "I would have him go to some country where he was not known, and not to the devil, where he was known."Pooler, the young fellow who was second in the duel ia which Cochran was killed, is arrested for robbing a fellow lodger at Barnum's of $200, the money being found upon hirn. The gentleman is in a fair way of receiving the reward of his valor and high sense of honor. I didn't Hke the minister's sermÃ³n last, Similar.' 'DM'nt like il, brotÃ¼er A ;'- 'Why, 1 saw you nodding asaent to every proposition of the parson.'