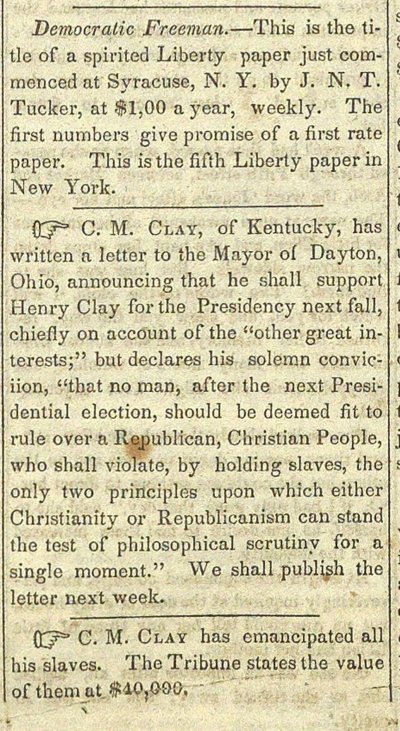 This is thetle of a spirited Liberty paper just commenced at Syracuse, N. Y. by J. N. T. Tucker, at $1,00 a year, weekly. The first numbers give promise of a first rate paper. This is the fifih Liberty paper in New York. (t?3 C. M. Clay, of Kentucky, has written a letter to the Mayor oÃ­ Dayton, Ohio, announcing that he shall support Henry Clay for the Presidency next fall, chiefly on account of the "other great interests;" but declares his solemn conviciion, "that no man, after the next Presidential election, should be deemed fit to rule over a Republican, Christian People, who shall viÃ³late, by holding slaves, the only two principies upon which either Chnstianity or Republicanism can stand the test of philosophical scrutiny for a single moment." We shall publih the letter next week. ftr C. M. Clay has emancipated all his slaves. The Tribune states the value ofthernat_#40,OÃ¶O.