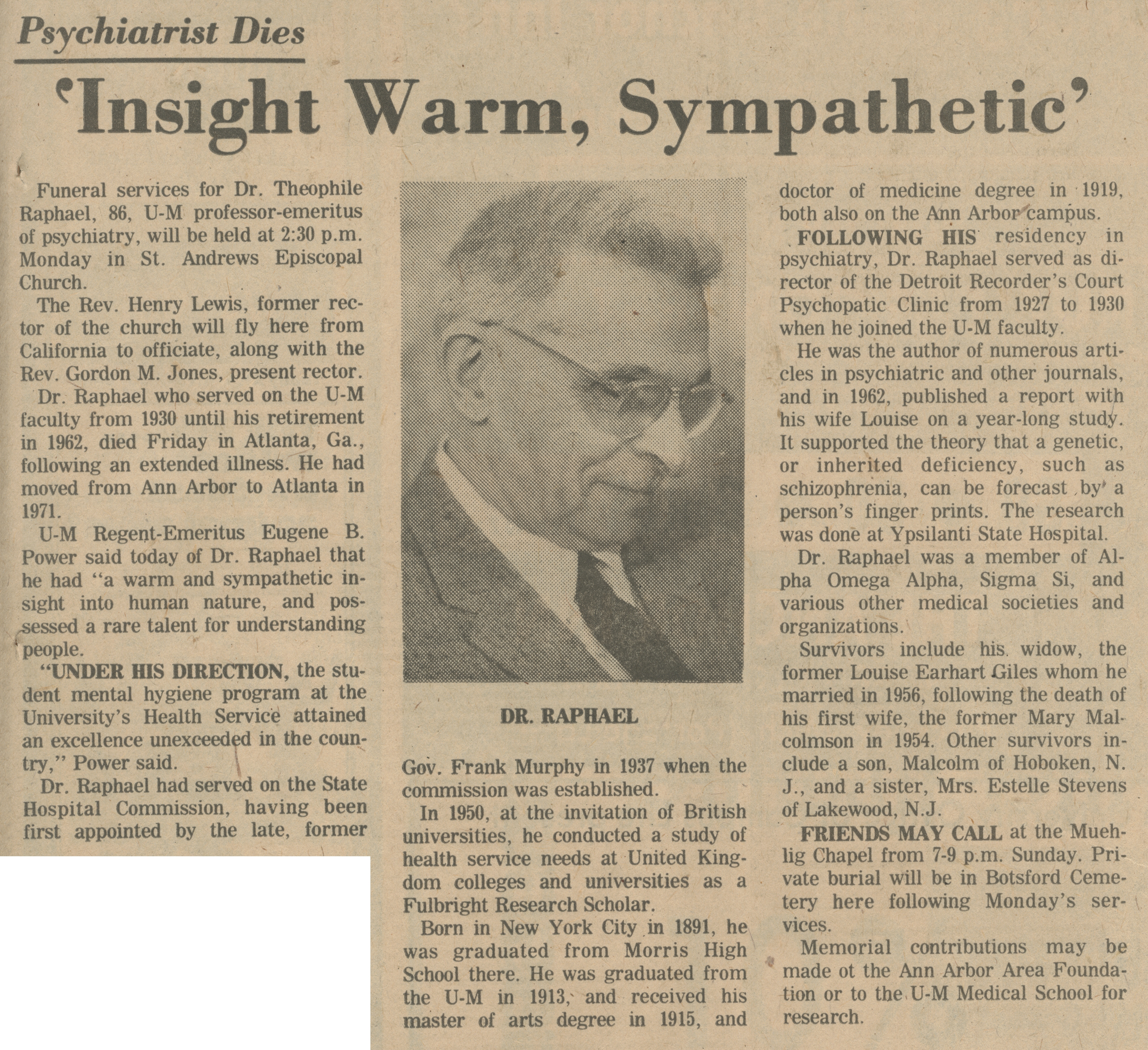 'Insight Warm, Sympathetic' Funeral services for Dr. Theophile Raphael, 86, U-M professor-emeritus of psychiatry, will be held at 2:30 p.m. Monday in St. Andrews Episcopal Church. The Rev. Henry Lewis, former rector of the church will fly here from California to officiate, along the with Rev. Gordon M. Jones, present rector. Dr. Raphael who served on the U-M faculty from 1930 until his retirement in 1962, died Friday in Atlanta, Ga., following an extended illness. He had moved from Ann Arbor to Atlanta in 1971. U-M Regent-Emeritus Eugene B. Power said today of Dr. Raphael that he had "a warm and sympathetic insight into human nature, and possessed a rare talent for understanding people. "UNDER HIS DIRECTION, the student mental hygiene program at the University's Health Service attained an excellence unexceeded in the country," Power said. Dr. Raphael had served on the State Hospital Commission, having been first appointed by the late, former Gov. Frank Murphy in 1937 when the commission was established. In 1950, at the invitation of British universities, he conducted a study of health service needs at United Kingdom colleges and universities as a Fulbright Research Scholar. Born in New York City in 1891, he was graduated from Morris High School there. He was graduated from the U-M in 1913, and received his master of arts degree in 1915, and doctor of medicine degree in 1919, both also on the Ann Arbor campus. FOLLOWING HIS residency in psychiatry, Dr. Raphael served as director of the Detroit Recorder's Court Psychopatic Clinic from 1927 to 1930 when he joined the U-M faculty. He was the author of numerous articles in psychiatric and other journals, and in 1962, published a report with his wife Louise on a year-long study. It supported the theory that a genetic, or inherited deficiency, such as schizophrenia, can be forecast by a person's finger prints. The research was done at Ypsilanti State Hospital. Dr. Raphael was a member of Alpha Omega Alpha, Sigma Si, and various other medical societies and organizations. Survivors include his widow, the former Louise Earhart Giles whom he married in 1956, following the death of his first wife, the former Mary Malcolmson in 1954. Other survivors include a son, Malcolm of Hoboken, N. J., and a sister, Mrs. Estelle Stevens of Lakewood, N. J. FRIENDS MAY CALL at the Muehlig Chapel from 7-9 p.m. Sunday. Private burial will be in Botsford Cemetery here following Monday's services. Memorial contributions may be made to the Ann Arbor Area Foundation or to the U-M Medical School for research.