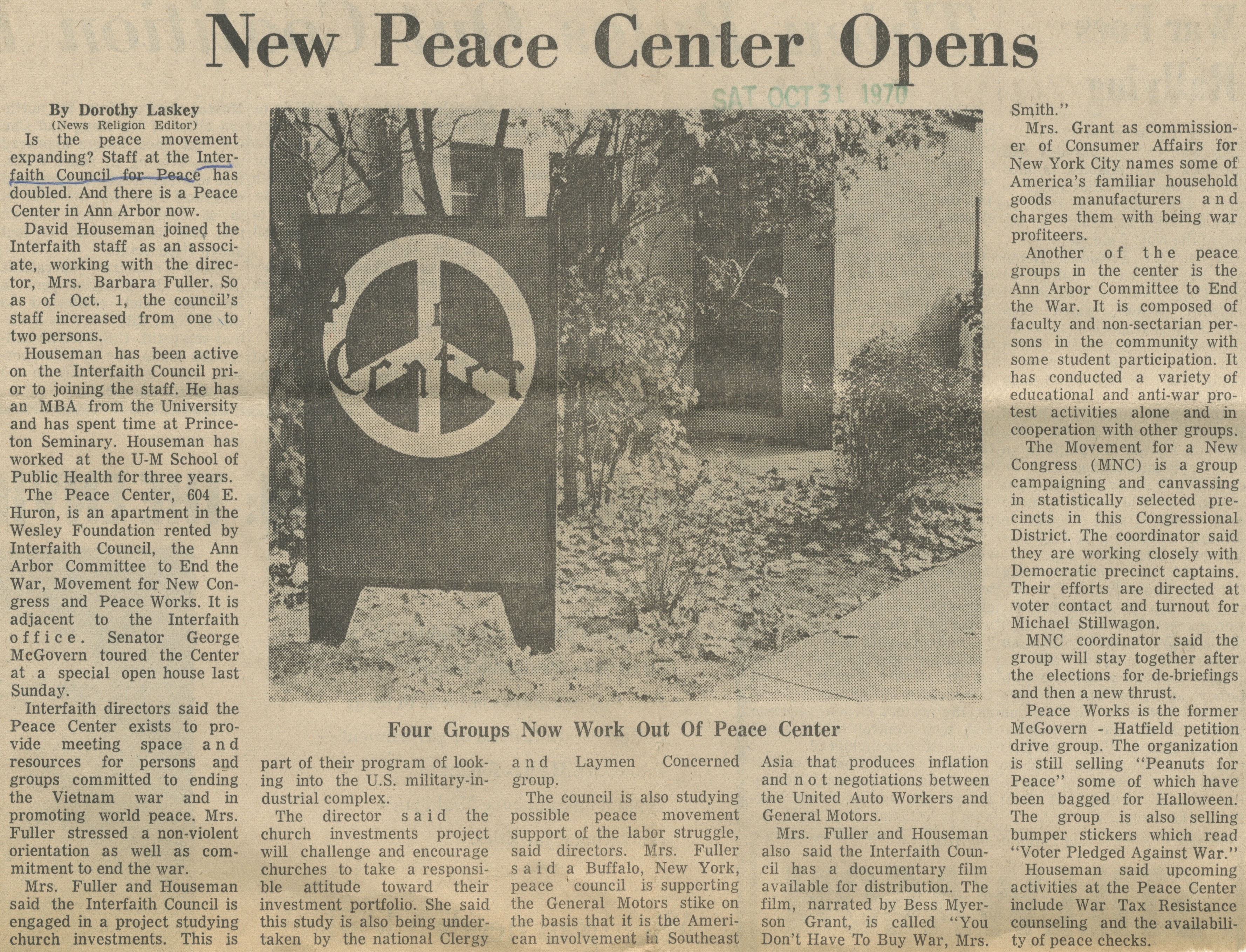 Is the peace movement expanding? Staff at the Interfaith Council for Peace has doubled. And there is a Peace Center in Ann Arbor now.

David Houseman joined the Interfaith staff as an associate, working with the director, Mrs. Barbara Fuller. So as of Oct. 1, the council’s staff increased from one to two persons.

Houseman has been active on the Interfaith Council prior to joining the staff. He has an MBA from the University and has spent time at Princeton Seminary. Houseman has worked at the U-M School of Public Health for three years.

The Peace Center, 604 E. Huron, is an apartment in the Wesley Foundation rented by Interfaith Council, the Ann Arbor Committee to End the War, Movement for New Congress and Peace Works. It is adjacent to the Interfaith office. Senator George McGovern toured the Center at a special open house last Sunday.

Interfaith directors said the Peace Center exists to provide meeting space and resources for persons and groups committed to ending the Vietnam war and in promoting world peace. Mrs. Fuller stressed a non-violent orientation as well as commitment to end the war.

Mrs. Fuller and Houseman said the Interfaith Council is engaged in a project studying church investments. This is part of their program of looking into the U.S. military-industrial complex.

The director said the church investments project will challenge and encourage churches to take a responsible attitude toward their investment portfolio. She said this study is also being undertaken by the national Clergy and Laymen Concerned group.

The council is also studying possible peace movement support of the labor struggle, said directors. Mrs. Fuller said a Buffalo, New York, peace council is supporting the General Motors stike on the basis that it is the American involvement in Southeast Asia that produces inflation and not negotiations between the United Auto Workers and General Motors.

Mrs. Fuller and Houseman also said the Interfaith Council has a documentary film available for distribution. The film, narrated by Bess Myerson Grant, is called “You Don't Have To Buy War, Mrs. Smith.”

Mrs. Grant as commissioner of Consumer Affairs for New York City names some of America’s familiar household goods manufacturers and charges them with being war profiteers.

Another of the peace groups in the center is the Ann Arbor Committee to End the War. It is composed of faculty and non-sectarian persons in the community with some student participation. It has conducted a variety of educational and anti-war protest activities alone and in cooperation with other groups.

The Movement for a New Congress (MNC) is a group campaigning and canvassing in statistically selected precincts in this Congressional District. The coordinator said they are working closely with Democratic precinct captains. Their efforts are directed at voter contact and turnout for Michael Stillwagon.

MNC coordinator said the group will stay together after the elections for de-briefings and then a new thrust.

Peace Works is the former McGovern - Hatfield petition drive group. The organization is still selling “Peanuts for Peace” some of which have been bagged for Halloween. The group is also selling bumper stickers which read “Voter Pledged Against War.”

Houseman said upcoming activities at the Peace Center include War Tax Resistance counseling and the availability of peace checks.