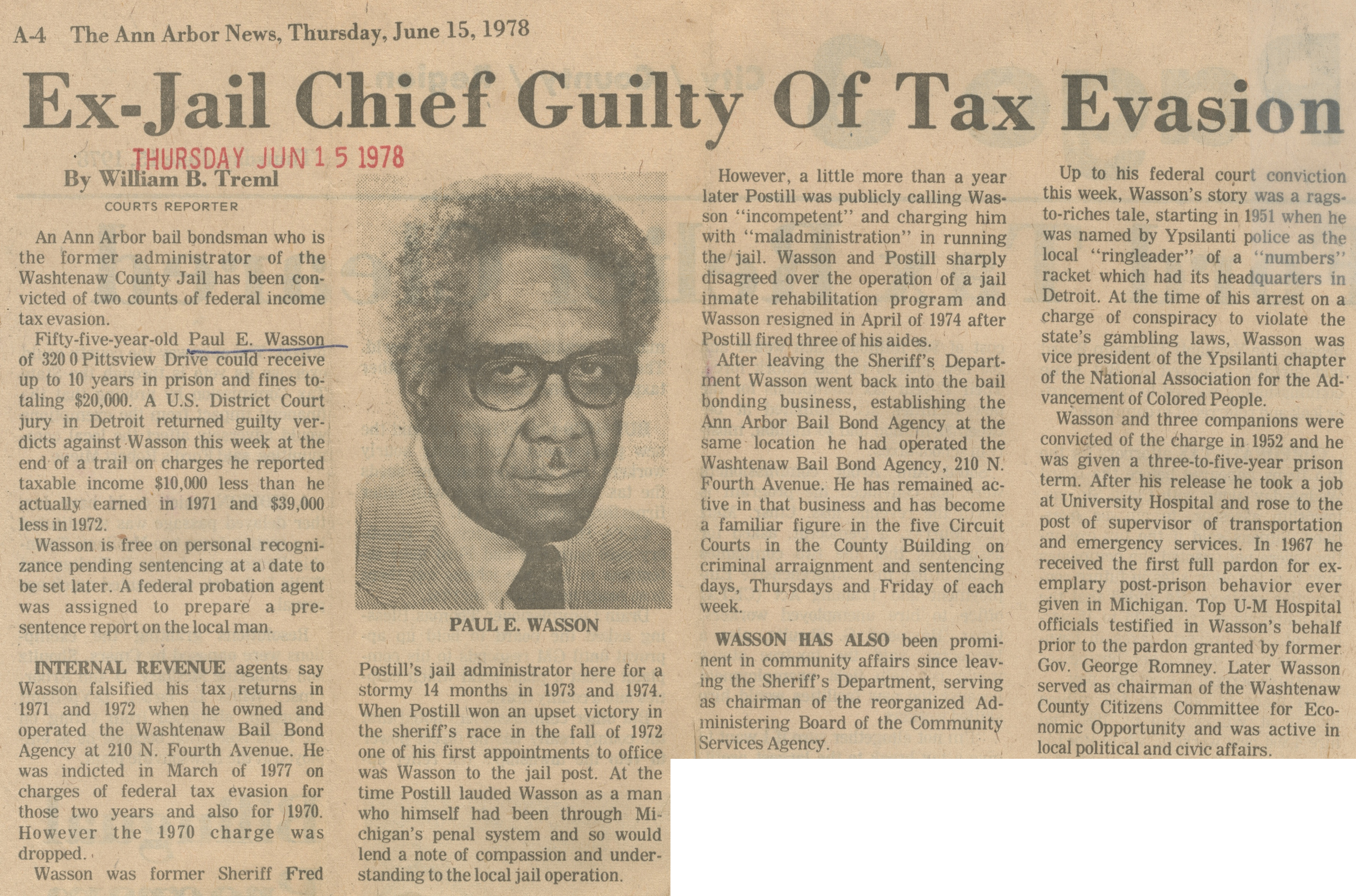 An Ann Arbor bail bondsman who is the former administrator of the Washtenaw County Jail has been convicted of two counts of federal income tax evasion.

Fifty-five-year-old Paul E. Wasson of 320 0 Pittsview Drive could receive up to 10 years in prison and fines totaling $20,000. A U.S. District Court jury in Detroit returned guilty verdicts against Wasson this week at the end of a trail on charges he reported taxable income $10,000 less than he actually earned in 1971 and $39,000 less in 1972.

Wasson is free on personal recognizance pending sentencing at a date to be set later. A federal probation agent was assigned to prepare a pre-sentence report on the local man.

INTERNAL REVENUE agents say Wasson falsified his tax returns in 1971 and 1972 when he owned and operated the Washtenaw Bail Bond Agency at 210 N. Fourth Avenue. He was indicted in March of 1977 on charges of federal tax evasion for those two years and also for 1970. However the 1970 charge was dropped.

Wasson was former Sheriff Fred Postill’s jail administrator here for a stormy 14 months in 1973 and 1974. When Postill won an upset victory in the sheriff’s race in the fall of 1972 one of his first appointments to office was Wasson to the jail post. At the time Postill lauded Wasson as a man who himself had been through Michigan's penal system and so would lend a note of compassion and understanding to the local jail operation.

However, a little more than a year later Postill was publicly calling Wasson “incompetent” and charging him with "maladministration” in running the jail. Wasson and Postill sharply disagreed over the operation of a jail inmate rehabilitation program and Wasson resigned in April of 1974 after Postill fired three of his aides.

After leaving the Sheriff’s Department Wasson went back into the bail bonding business, establishing the Ann Arbor Bail Bond Agency at the same location he had operated the Washtenaw Bail Bond Agency, 210 N. Fourth Avenue. He has remained active in that business and has become a familiar figure in the five Circuit Courts in the County Building on criminal arraignment and sentencing days, Thursdays and Friday of each week.

WASSON HAS ALSO been prominent in community affairs since leaving the Sheriff’s Department, serving as chairman of the reorganized Administering Board of the Community Services Agency.

Up to his federal court conviction this week, Wasson’s story was a rags-to-riches tale, starting in 1951 when he was named by Ypsilanti police as the local “ringleader” of a "numbers” racket which had its headquarters in Detroit. At the time of his arrest on a charge of conspiracy to violate the state's gambling laws, Wasson was vice president of the Ypsilanti chapter of the National Association for the Advancement of Colored People.

Wasson and three companions were convicted of the charge in 1952 and he was given a three-to-five-year prison term. After his release he took a job at University Hospital and rose to the post of supervisor of transportation and emergency services. In 1967 he received the first full pardon for exemplary post-prison behavior ever given in Michigan. Top U-M Hospital officials testified in Wasson's behalf prior to the pardon granted by former Gov. George Romney. Later Wasson served as chairman of the Washtenaw County Citizens Committee for Economic Opportunity and was active in local political and civic affairs.