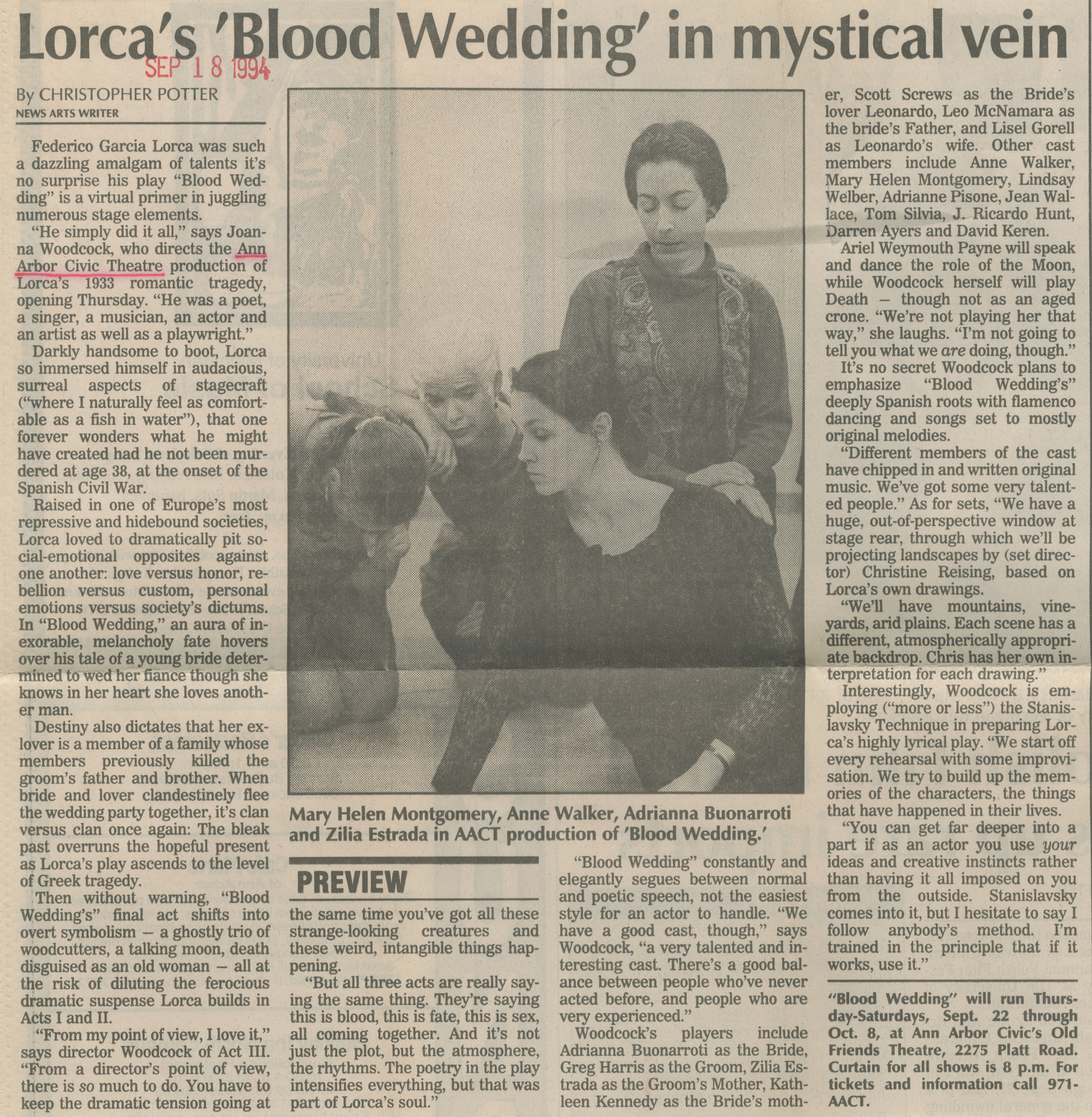 Federico Garcia Lorca was such a dazzling amalgam of talents it’s no surprise his play “Blood Wedding” is a virtual primer in juggling numerous stage elements.

“He simply did it all,” says Joanna Woodcock, who directs the Ann Arbor Civic Theatre production of Lorca’s 1933 romantic tragedy, opening Thursday. “He was a poet, a singer, a musician, an actor and an artist as well as a playwright.”

Darkly handsome to boot, Lorca so immersed himself in audacious, surreal aspects of stagecraft (“where I naturally feel as comfortable as a fish in water”), that one forever wonders what he might have created had he not been murdered at age 38, at the onset of the Spanish Civil War.

Raised in one of Europe’s most repressive and hidebound societies, Lorca loved to dramatically pit social-emotional opposites against one another: love versus honor, rebellion versus custom, personal emotions versus society’s dictums. In “Blood Wedding,” an aura of inexorable, melancholy fate hovers over his tale of a young bride determined to wed her fiance though she knows in her heart she loves another man.

Destiny also dictates that her ex-lover is a member of a family whose members previously killed the groom’s father and brother. When bride and lover clandestinely flee the wedding party together, it’s clan versus clan once again: The bleak past overruns the hopeful present as Lorca’s play ascends to the level of Greek tragedy.

Then without warning, “Blood Wedding’s” final act shifts into overt symbolism - a ghostly trio of woodcutters, a talking moon, death disguised as an old woman - all at the risk of diluting the ferocious dramatic suspense Lorca builds in Acts I and II.

“From my point of view, I love it,” says director Woodcock of Act III. “EYom a director’s point of view, there is so much to do. You have to keep the dramatic tension going at the same time you’ve got all these strange-looking creatures and these weird, intangible things happening.

“But all three acts are really saying the same thing. They’re saying this is blood, this is fate, this is sex, all coming together. And it’s not just the plot, but the atmosphere, the rhythms. The poetry in the play intensifies everything, but that was part of Lorca’s soul.”

“Blood Wedding” constantly and elegantly segues between normal and poetic speech, not the easiest style for an actor to handle. “We have a good cast, though,” says Woodcock, “a very talented and interesting cast. There’s a good balance between people who’ve never acted before, and people who are very experienced.”

Ariel Weymouth Payne will speak and dance the role of the Moon, while Woodcock herself will play Death - though not as an aged crone. “We’re not playing her that way,” she laughs. “I’m not going to tell you what we are doing, though.”

“Different members of the cast have chipped in and written original music. We’ve got some very talented people.” As for sets, “We have a huge, out-of-perspective window at stage rear, through which we’ll be projecting landscapes by (set director) Christine Reising, based on Lorca’s own drawings.

“We’ll have mountains, vineyards, arid plains. Each scene has a different, atmospherically appropriate backdrop. Chris has her own interpretation for each drawing.”

Interestingly, Woodcock is employing (“more or less”) the Stanislavsky Technique in preparing Lorca’s highly lyrical play. “We start off every rehearsal with some improvisation. We try to build up the memories of the characters, the things that have happened in their lives.

“You can get far deeper into a part if as an actor you use your ideas and creative instincts rather than having it all imposed on you from the outside. Stanislavsky comes into it, but I hesitate to say I follow anybody’s method. I’m trained in the principle that if it works, use it.”