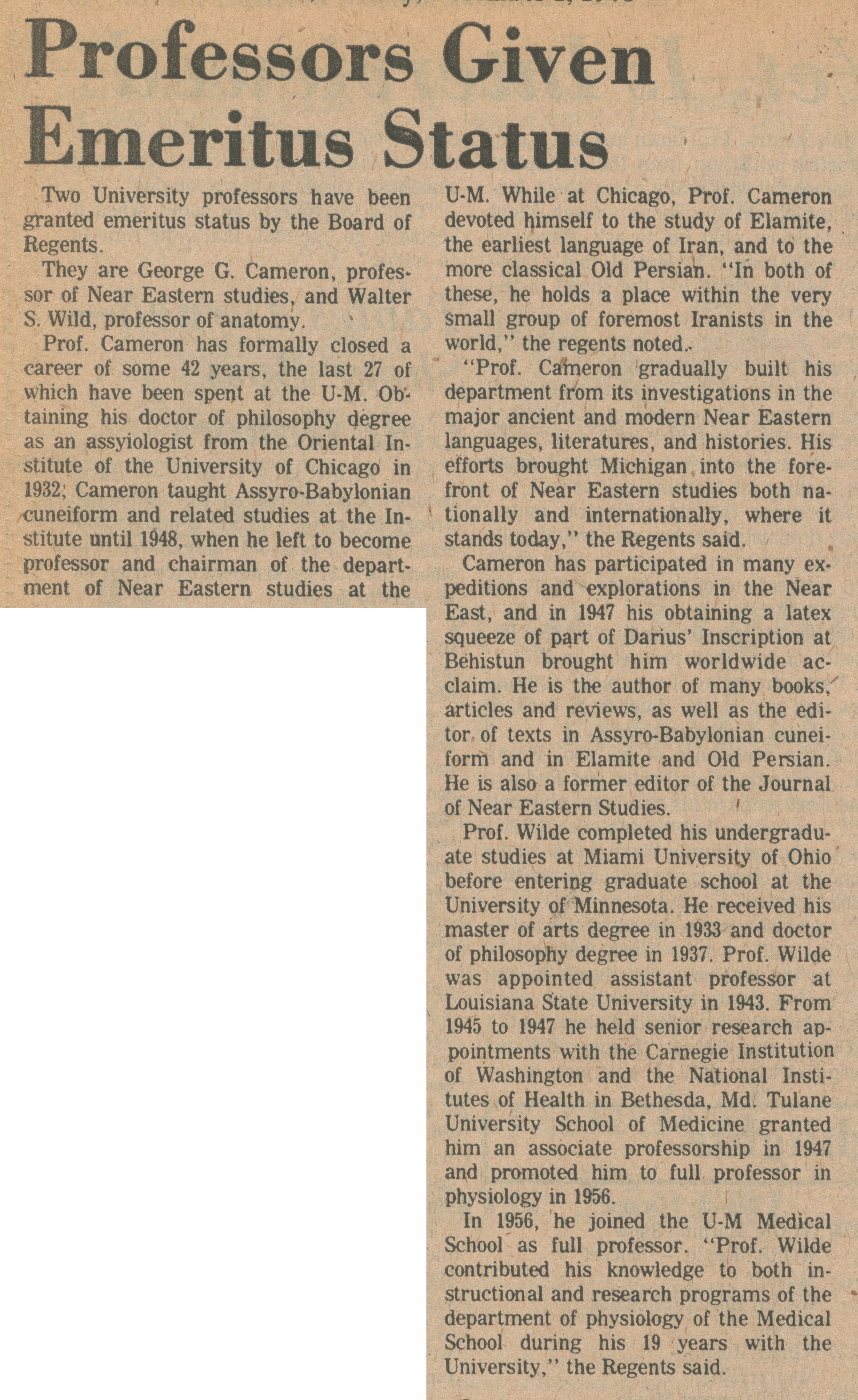 Two University professors have been granted emeritus status by the Board of Regents.
They are George G. Cameron, professor of Near Eastern studies, and Walter S. Wilde, professor of anatomy.
Prof. Cameron has formally closed a career of some 42 years, the last 27 of which have been spent at the U-M. Obtaining his doctor of philosophy degree as an assyiologist from the Oriental Institute of the University of Chicago in 1932, Cameron taught Assyro-Babylonian cuneiform and related studies at the Institute until 1948, when he left to become professor and chairman of the department of Near Eastern studies at the U-M. While at Chicago, Prof. Cameron devoted himself to the study of Elamite, the earliest language of Iran, and to the more classical Old Persian. “In both of these, he holds a place within the very small group of foremost Iranists in the world,” the regents noted.
“Prof. Cameron gradually built his department from its investigations in the major ancient and modern Near Eastern languages, literatures, and histories. His efforts brought Michigan into the forefront of Near Eastern studies both nationally and internationally, where it stands today,” the Regents said.
Cameron has participated in many expeditions and explorations in the Near East, and in 1947 his obtaining a latex squeeze of part of Darius’ Inscription at Behistun brought him worldwide acclaim. He is the author of many books, articles and reviews, as well as the editor of texts in Assyro-Babylonian cuneiform and in Elamite and Old Persian. He is also a former editor of the Journal of Near Eastern Studies.
Prof. Wilde completed his undergraduate studies at Miami University of Ohio before entering graduate school at the University of Minnesota. He received his mater of arts degree in 1933 and doctor of philosophy degree in 1937. Prof. Wilde was appointed assistant professor at Louisiana State University in 1943. From 1945 to 1947 he held senior research appointments with the Carnegie Institution of Washington and the National Institutes of Health in Bethesda, Md. Tulane University School of Medicine granted him an associate professorship in 1947 and promoted him to full professor in physiology in 1956.
In 1956, he joined the U-M Medical School as full professor. “Prof. Wilde contributed his knowledge to both instructional and research programs of the department of physiology of the Medical School during his 19 years with the University,” the Regents said.