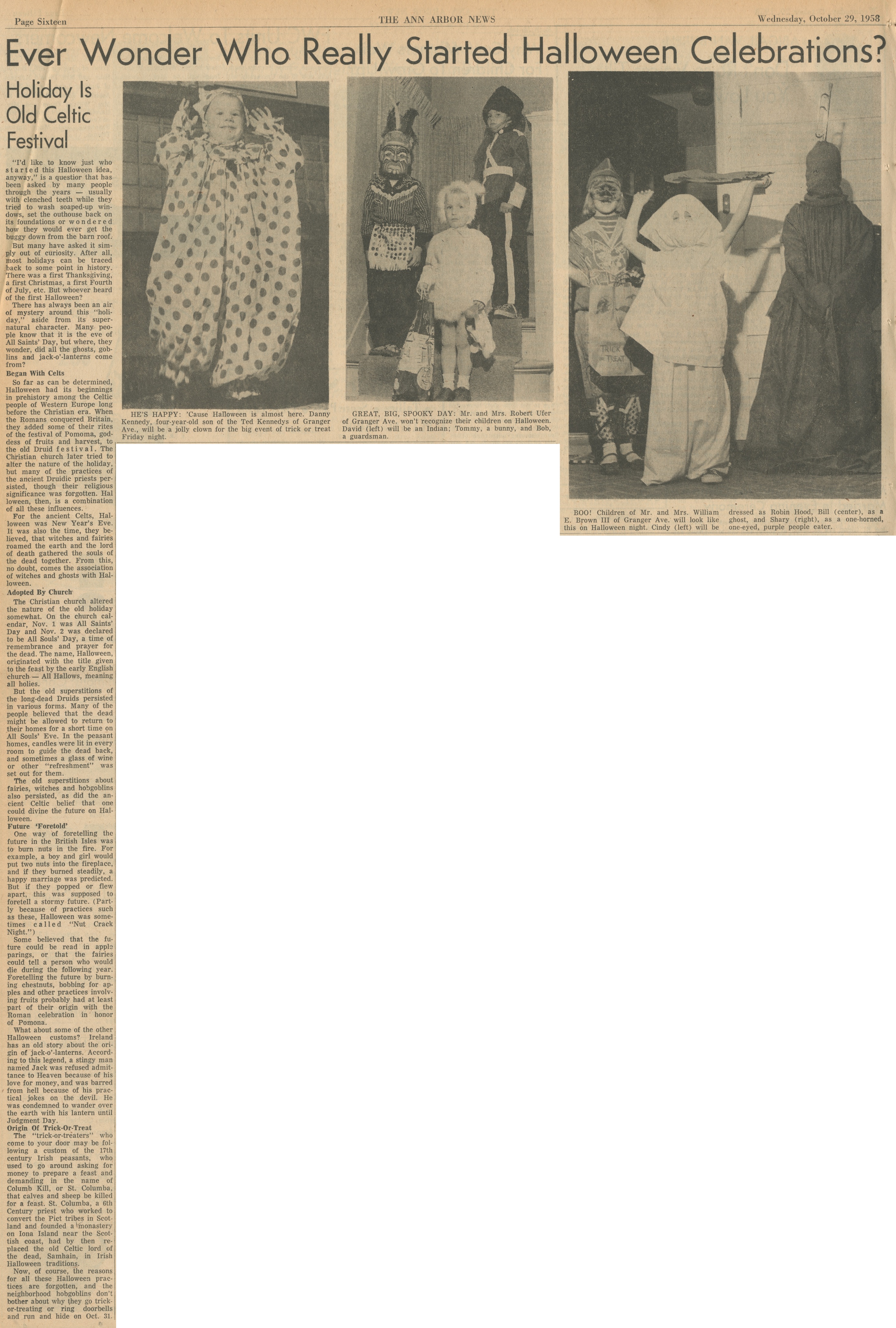 "I'd like to know just who started this Halloween idea, anyway," is a question that has been asked by many people through the years -- usually with clenched teeth while they tried to wash soaped-up windows, set the outhouse back on its foundations or wondered how they would ever get the buggy down from the barn roof.

But many have asked it simply out of curiosity. After all, most holidays can be traced back to some point in history. There was a first Thanksgiving, a first Christmas, a first Fourth of July, etc. But whoever heard of the first Halloween?

There has always been an air of mystery around this "holiday," aside from its supernatural character. Many people know that it is the eve of All Saints' Day, but where, they wonder, did all the ghosts, goblins and jack-o-lanterns come from?

So far as can be determined, Halloween had its beginnings in prehistory among the Celtic people of Western Europe long before the Christian era. When the Romans conquered Britain, they added some of their rites of the festival of Pomona, goddess of fruits and harvest, to the old Druid festival. The Christian church later tried to alter the nature of the holiday, but many of the practices of the ancient Druidic priests persisted, though their religious significance was forgotten. Halloween, then, is a combination of all these influences.

For the ancient Celts, Halloween was New Year's Eve. It was also the time, they believed, that witches and fairies roamed the earth and the lord of death gathered the souls of the dead together. From this, no doubt, comes the association of witches and ghosts with Halloween.

The Christian church altered the nature of the old holiday somewhat. On the church calendar, Nov. 1 was All Saints' Day and Nov 2 was declared to be All Souls Day, a time of remembrance and prayer for the dead. The name, Halloween, originated with the title given to the feast by the early English church - All Hallows, meaning all holies.

But the old superstitions of the long-dead Druids persisted in various forms. Many of the people believed that the dead might be allowed to return to their home for a short time on All Souls' Eve. In the peasant homes, candles were lit in every room to guide the dead back, and sometimes a glass of wine or other "refreshment" was set out for them.

The old superstitions about fires, witches and hobgoblins also persisted, as did the ancient Celtic belief that one could divine the future on Halloween.

One way of foretelling the future in the British Isles was to burn nuts in the fire. For example, a boy and girl would put two nuts into the fireplace, and if they burned steadily, a happy marriage was predicted. But if they popped or flew apart, this was supposed to foretell a stormy future. (Partly because of practices such as these, Halloween was sometimes called "Nut Crack Night.")

Some believed that the future could be read in apple parings, or that the fairies could tell a person who would die during the following year. Foretelling the future by burning chestnuts, bobbing for apples and other practices involving fruits probably had at least part of their origin with the Roman celebration in honor of Pomona.

What about some of the other Halloween customs? Ireland has an old story about the origin of jack-o'-lanterns. According to this legend, a stingy man named Jack was refused admittance to Heaven because because of his love for money, and was barred from hell because of his practical jokes on the devil. He was condemned to wander over the earth with his lantern until Judgement Day.

The "trick-or-treaters" who come to your door may be following a custom of the 17th century Irish peasants, who used to go around asking for money to prepare a feast and demanding in the name of Columb Kill, or St. Columba, that calves and sheep be killed for a feast. St. Columba, a 6th Century priest who worked to convert the Piet tribes in Scotland and founded a monastery on Iona Island near the Scottish coast, had by then replaced the old Celtic lord of the dead, Samhain, in Irish Halloween traditions.

Now, of course, the reasons for all these Halloween practices are forgotten, and the neighborhood hobgoblins don't bother about why they go trick-or-treating or ring doorbells and run and hide on Oct. 31.

HE'S HAPPY: 'Cause Halloween is almost here. Danny Kennedy, four-year-old son of the Ted Kennedys of Granger Ave., will be a jolly clown for the big event of trick or treat Friday night.

GREAT, BIG, SPOOKY DAY: Mr. and Mrs. Robert Ufer of Granger Ave. won't recognize their children on Halloween. David (left) will be an Indian; Tommy, a bunny, and Bob, a guardsman.

BOO! Children of Mr. and Mrs. William E. Brown III of Granger Ave. will look like this on Halloween night. Cindy (left) will be dressed as Robin Hood, Bill (center), as a ghost, and Shary (right), as a one-horned, one-eyed, purple people eater.