Video Explores Another Side Of Ann Arbor 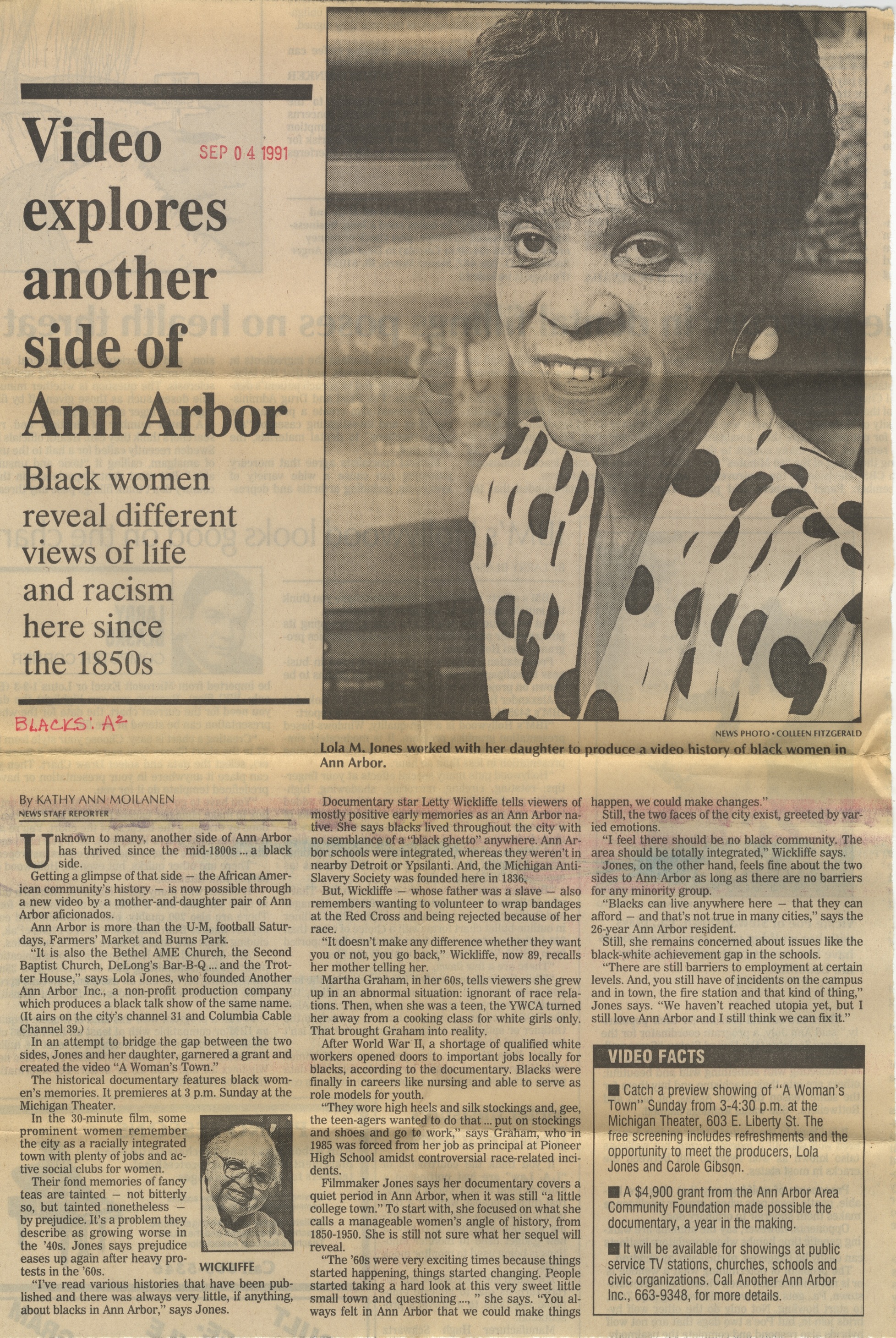 Unknown to many, another side of Ann Arbor has thrived since the mid-1800s...a black side.

Getting a glimpse of that side -- the African American community's history -- is now possible through a new video by a mother and daughter pair of Ann Arbor aficionados.

"It is also the Bethel AME Church, the Second Baptist Church, DeLong's Bar-B-Q...and the Trotter House," says Lola Jones, who founded Another Ann Arbor Inc., a non-profit production company which produces a black talk show of the same name. (It airs on the city's channel 31 and Columbia Cable Channel 39.)

In an attempt to bride the gap between the two sides, Jones and her daughter, garnered a grant to create the video "A Woman's Town."

The historical documentary features black women's memories. It premieres at 3 p.m. Sunday at the Michigan Theater.

In the 30-minute film, some prominent women remember the city as a racially integrated town with plenty of jobs and active social clubs for women.

Their fond memories of fancy teas are tainted -- not bitterly so, but tainted nonetheless -- by prejudice. It's a problem they describe as growing worse in the '40s. Jones says prejudice eases up again after heavy protests in the '60s.

"I've read various histories that have been published and there was always very little, if anything, about blacks in Ann Arbor," says Jones.

Documentary star Letty Wickliffe tells viewers of mostly positive early memories as an Ann Arbor native. She says blacks lived throughout the city with no semblance of a "black ghetto" anywhere. Ann Arbor schools were integrated, whereas they weren't in nearby Detroit or Ypsilanti. And, the Michigan Anti-Slavery Society was founded here in 1836.

But, Wickliffe -- whose father was a slave -- also remembers wanting to volunteer to wrap bandages at the Red Cross and being rejected because of her race.

"It doesn't make any difference whether they want you or not, you go back," Wickliffe, now 89, recalls her mother telling her.

Martha Graham, in her 60s, tells viewers she grew up in an abnormal situation: ignorant of race relations. Then, when she was a teen, the YWCA turned her away from a cooking class for white girls only. That brought Graham into reality.

After World War II, a shortage of qualified white workers opened doors to important jobs locally for blacks, according to the documentary. Blacks were finally in careers like nursing and able to serve as role models for youth.

"They wore high heels and silk stockings and, gee, the teen-agers wanted to do that...put on stockings and shoes and go to work." says Graham, who in 1985 was forced from her job as principle at Pioneer High school amidst controversial race-related incidents.

Filmmaker Jones says her documentary covers a quiet period in Ann Arbor, when it was still "a little college town." To start with, she focused on what she calls a manageable women's angle of history, from 1850-1950. She is still not sure what her sequel will reveal.

"The '60s were very exciting times because things started happening, things started changing. People started taking a hard look at this very sweet little small town and questioning...," she says, "you always felt in Ann Arbor that we could make things happen, we could make changes."

Still, the two faces of the city exist, greeted by varied emotions.

"I feel there should be no black community. The area should be totally integrated," Wickliffe says.

Jones, on the other hand, feels fine about the two sides to Ann Arbor as long as there are no barriers for any minority group.

"Blacks can live anywhere here -- that they can afford -- and that's not true in many cities," says the 26-year Ann Arbor resident.

Still, she remains concerned about issues like the black-white achievement gap in the schools.

"There are still barriers to employment at certain levels, And, you still have of incidents on the campus and in town, the fire station and that kind of thing," Jones says. "We haven't reached utopia yet, but I still love Ann Arbor and I still think we can fix it."

- Catch a preview showing of "A Woman's Town" Sunday from 3-4:30 p.m. at the Michigan Theater, 603 E. Liberty St. The free screening includes refreshments and the opportunity to meet the producers, Lola Jones and Carole Gibson.

- A $4,900 grant from the Ann Arbor Area Community Foundation made possible the documentary, a year in the making.

- It will be available for showings at public service TV stations, churches, schools and civic organizations. Call Another Ann Arbor Inc., 663-9348, for more details.