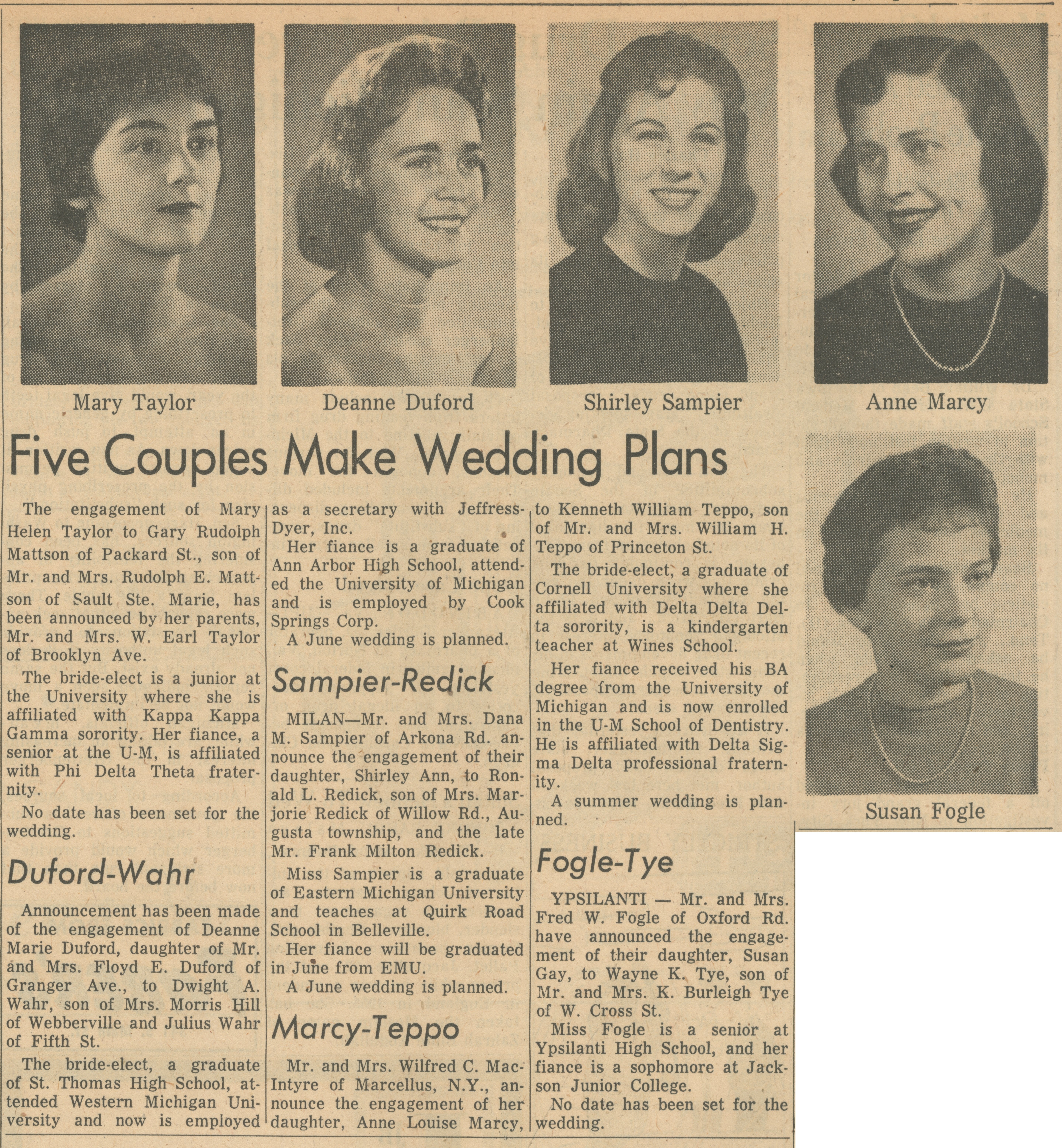 Five Couples Make Wedding Plans
The engagement of Mary Helen Taylor to Gary Rudolph Mattson of Packard St., son of Mr. and Mrs. Rudolph E. Mattson of Sault Ste. Marie, has been announced by her parents, Mr. and Mrs. W. Earl Taylor of Brooklyn Ave.
The bride-elect is a junior at the University where she is affiliated with Kappa Kappa Gamma sorority. Her fiancé, a senior at the U-M, is affiliated with Phi Delta Theta fraternity.
No date has been set for the wedding.
Duford-Wahr
Announcement has been made of the engagement of Deanne Marie Duford, daughter of Mr. and Mrs. Floyd E. Duford of Granger Ave., to Dwight A. Wahr, son of Mrs. Morris Hill of Webberville and Julius Wahr of Fifth St.
The bride-elect, a graduate of St. Thomas High School, attended Western Michigan University and now is employed as a secretary with Jeffress-Dyer, Inc.
Her fiancé is a graduate of Ann Arbor High School, attended the University of Michigan and is employed by Cook Springs Corp.
A June wedding is planned.
Sampier-Redick
MILAN—Mr. and Mrs. Dana M. Sampier of Arkona Rd. announce the engagement of their daughter, Shirley Ann, to Ronald L. Redick, son of Mrs. Marjorie Redick of Willow Rd., Augusta township, and the late Mr. Frank Milton Redick.
Miss Sampier is a graduate of Eastern Michigan University and teaches at Quirk Road School in Belleville.
Her fiancé will be graduated in June from EMU.
A June wedding is planned.
Marcy-Teppo
Mr. and Mrs. Wilfred C. MacIntyre of Marcellus, N.Y., announce the engagement of her daughter, Anne Louise Marcy, to Kenneth William Teppo, son of Mr. and Mrs. William H. Teppo of Princeton St.
The bride-elect, a graduate of Cornell University where she was affiliated with Delta Delta Delta sorority, is a kindergarten teacher at Wines School.
Her fiancé received his BA degree from the University of Michigan and is now enrolled in the U-M School of Dentistry. He is affiliated with Delta Sigma Delta professional fraternity.
A summer wedding is planned.
Fogle-Tye
YPSILANTI—Mr. and Mrs. Fred W. Fogle of Oxford Rd. have announced the engagement of their daughter, Susan Gay, to Wayne K. Tye, son of Mr. and Mrs. K Burleigh Tye of W. Cross St.
Miss Fogle is a senior at Ypsilanti High School, and her fiancé is a sophomore at Jackson Junior College.
No date has been set for the wedding.