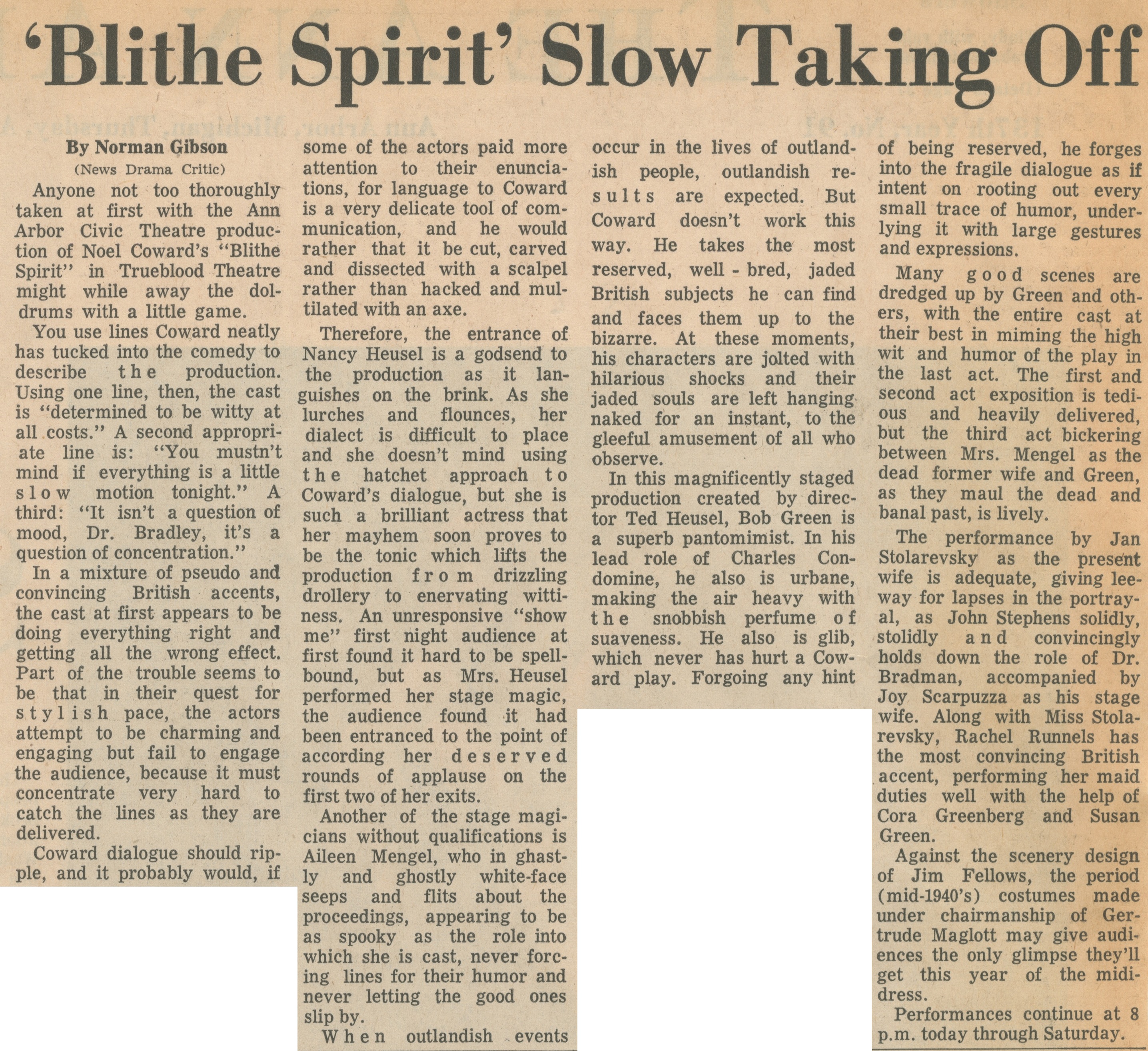 (News Drama Critic) Anyone not too thoroughly taken at first with the Ann Arbor Civic Theatre production of Noel Coward’s “Blithe Spirit” in Trueblood Theatre might while away the doldrums with a little game.

You use lines Coward neatly has tucked into the comedy to describe the production. Using one line, then, the cast is “determined to be witty at all costs.” A second appropriate line is: “You mustn’t mind if everything is a little slow motion tonight.” A third: “It isn’t a question of mood, Dr. Bradley, it’s a question of concentration.”

In a mixture of pseudo and convincing British accents, the cast at first appears to be doing everything right and getting all the wrong effect. Part of the trouble seems to be that in their quest for stylish pace, the actors attempt to be charming and engaging but fail to engage the audience, because it must concentrate very hard to catch the lines as they are delivered.

Coward dialogue should ripple, and it probably would, if some of the actors paid more attention to their enunciations, for language to Coward is a very delicate tool of communication, and he would rather that it be cut, carved, and dissected with a scalpel rather than hacked and mutilated with an axe.

Therefore, the entrance of Nancy Heusel is a godsend to the production as it languishes on the brink. As she lurches and flounces, her dialect is difficult to place and she doesn’t mind using the hatchet approach to Coward’s dialogue, but she is such a brilliant actress that her mayhem soon proves to be the tonic which lifts the production from drizzling drollery to enervating wittiness. An unresponsive “show me” first night audience at first found it hard to be spellbound, but as Mrs. Heusel performed her stage magic, the audience found it had been entranced to the point of according her deserved rounds of applause on the first two of her exits.

Another of the stage magicians without qualifications is Aileen Mengel, who in ghastly and ghostly white-face seeps and flits about the proceedings, appearing to be as spooky as the role into which she is cast, never forcing lines for their humor and never letting the good ones slip by.

When outlandish events occur in the lives of outlandish people, outlandish results are expected. But Coward doesn’t work this way. He takes the most reserved, well - bred, jaded British subjects he can find and faces them up to the bizarre. At these moments, his characters are jolted with hilarious shocks and their jaded souls are left hanging naked for an instant, to the gleeful amusement of all who observe.

In this magnificently staged production created by director Ted Heusel, Bob Green is a superb pantomimist. In his lead role of Charles Condomine, he also is urbane, making the air heavy with the snobbish perfume o f suaveness. He also is glib, which never has hurt a Coward play. Forgoing any hint of being reserved, he forges into the fragile dialogue as if intent on rooting out every small trace of humor, underlying it with large gestures and expressions.

Many good scenes are dredged up by Green and others, with the entire cast at their best in miming the high wit and humor of the play in the last act. The first and second act exposition is tedious and heavily delivered, but the third act bickering between Mrs. Mengel as the dead former wife and Green, as they maul the dead and banal past, is lively.

The performance by Jan Stolarevsky as the present wife is adequate, giving leeway for lapses in the portrayal, as John Stephens solidly, stolidly and convincingly holds down the role of Dr. Bradman, accompanied by Joy Scarpuzza as his stage wife. Along with Miss Stolarevsky, Rachel Runnels has the most convincing British accent, performing her maid duties well with the help of Cora Greenberg and Susan Green.

Against the scenery design of Jim Fellows, the period (mid-1940’s) costumes made under chairmanship of Gertrude Maglott may give audiences the only glimpse they’ll get this year of the midi-dress.