'Critic's Choice' Fine, But Has Flaws 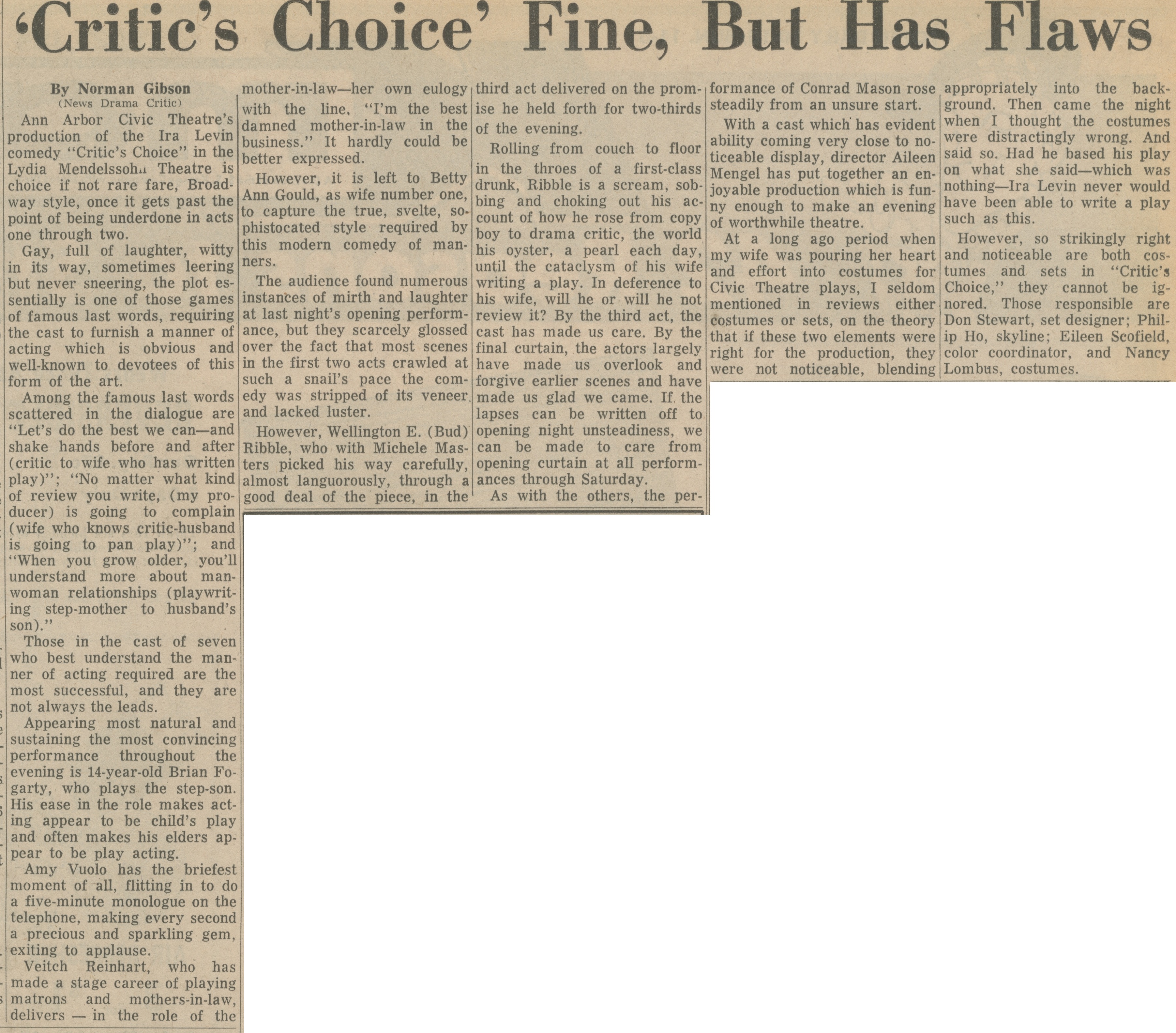 Ann Arbor Civic Theatre’s production of the Ira Levin comedy “Critic’s Choice” in the Lydia Mendelssoh.i Theatre is choice if not rare fare, Broadway style, once it gets past the point of being underdone in acts one through two.

Gay, full of laughter, witty in its way, sometimes leering but never sneering, the plot essentially is one of those games of famous last words, requiring the cast to furnish a manner of acting which is obvious and well-known to devotees of this form of the art.

Among the famous last words scattered in the dialogue are “Let’s do the best we can—and shake hands before and after (critic to wife who has written play)”; “No matter what kind , of review you write, (my producer) is going to complain (wife who knows critic-husband is going to pan play)”; and “When you grow older, you’ll understand more about man-woman relationships (playwriting step-mother to husband's son).”

Those in the cast of seven I who best understand the manner of acting required are the most successful, and they are not always the leads.

Appearing most natural and sustaining the most convincing performance throughout the evening is 14-year-old Brian Fogarty, who plays the step-son. His ease in the role makes acting appear to be child's play and often makes his elders appear to be play acting.

Amy Vuolo has the briefest moment of all, flitting in to do a five-minute monologue on the telephone, making every second a precious and sparkling gem, exiting to applause.

Veitch Reinhart, who has I made a stage career of playing matrons and mothers-in-law, delivers — in the role of the mother-in-law—her own eulogy with the line, “I’m the best damned mother-in-law in the business.” It hardly could be better expressed.

However, it is left to Betty Ann Gould, as wife number one, to capture the true, svelte, sophistocated style required by this modern comedy of manners.

The audience found numerous instances of mirth and laughter at last night’s opening performance, but they scarcely glossed over the fact that most scenes in the first two acts crawled at such a snail’s pace the comedy was stripped of its veneer, and lacked luster.

However, Wellington E. (Bud) Ribble, who with Michele Masters picked his way carefully, almost languorously, through a good deal of the piece, in the third act delivered on the promise he held forth for two-thirds of the evening.

Rolling from couch to floor in the throes of a first-class drunk, Ribble is a scream, sobbing and choking out his account of how he rose from copy boy to drama critic, the world his oyster, a pearl each day, until the cataclysm of his wife writing a play. In deference to his wife, will he or will he not review it? By the third act, the cast has made us care. By the final curtain, the actors largely have made us overlook and forgive earlier scenes and have made us glad we came. If the lapses can be written off to opening night unsteadiness, we can be made to care from opening curtain at all performances through Saturday.

As with the others, the performance of the Conrad Mason rose steadily from an unsure start.

With a cast which has evident ability coming very close to noticeable display, director Aileen Mengel has put together an enjoyable production which is funny enough to make an evening of worthwhile theatre.

At a long ago period when my wife was pouring her heart and effort into costumes for Civic Theatre plays, I seldom mentioned in reviews either costumes or sets, on the theory that if these two elements were right for the production, they were not noticeable, blending appropriately into the background. Then came the night when I thought the costumes were distractingly wrong. And said so. Had he based his play on what she said—which was nothing—Ira Levin never would have been able to write a play such as this.

However, so strikingly right and noticeable are both costumes and sets in “Critic's Choice,” they cannot be ignored. Those responsible are Don Stewart, set designer; Philip Ho, skyline; Eileen Scofield, color coordinator, and Nancy Lombus, costumes.