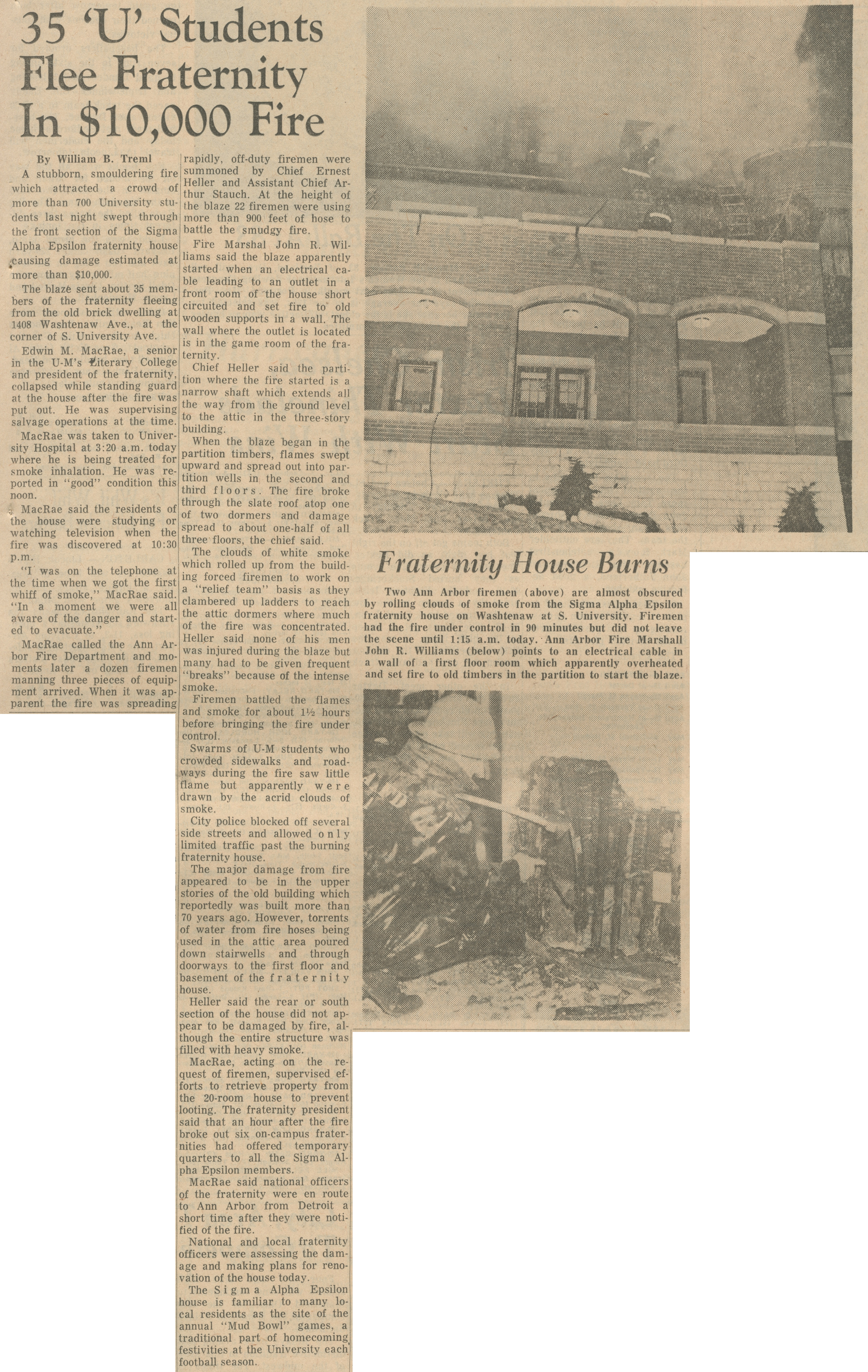 A stubborn, smouldering fire which attracted a crowd of more than 700 University students last night swept through the front section of the Sigma Alpha Epsilon fraternity house causing damage estimated at more than $10,000.

The blaze sent about 35 members of the fraternity fleeing from the old brick dwelling at 1408 Washtenaw Ave., at the corner of S. University Ave.

Edwin M. MacRae, a senior in the U-M’s Literary College and president of the fraternity, collapsed while standing guard at the house after the fire was put out. He was supervising salvage operations at the time.

MacRae was taken to University Hospital at 3:20 a.m. today where he is being treated for smoke inhalation. He was reported in “good” condition this noon.

MacRae said the residents of the house were studying or watching television when the fire was discovered at 10:30 p.m.

“I was on the telephone at the time when we got the first whiff of smoke,” MacRae said. “In a moment we were all aware of the danger and started to evacuate.”

MacRae called the Ann Arbor Fire Department and moments later a dozen firemen manning three pieces of equipment arrived. When it was apparent the fire was spreading rapidly, off-duty firemen were summoned by Chief Ernest Heller and Assistant Chief Arthur Stauch. At the height of the blaze 22 firemen were using more than 900 feet of hose to battle the smudgy fire.

Fire Marshal John R. Williams said the blaze apparently started when an electrical cable leading to an outlet in a front room of the house short circuited and set fire to old wooden supports in a wall. The wall where the outlet is located is in the game room of the fraternity.

Chief Heller said the partition where the fire started is a narrow shaft which extends all the way from the ground level to the attic in the three-story building.

When the blaze began in the partition timbers, flames swept upward and spread out into partition wells in the second and third floors. The fire broke through the slate roof atop one of two dormers and damage spread to about one-half of all three floors, the chief said.

The clouds of white smoke which rolled up from the building forced firemen to work on “relief team” basis as they clambered up ladders to reach the attic dormers where much of the fire was concentrated. Heller said none of his men was injured during the blaze but many had to be given frequent "breaks” because of the intense smoke.

Firemen battled the flames and smoke for about 1 1/2 hours before bringing the fire under control.

Swarms of U-M students who crowded sidewalks and roadways during the fire saw little but apparently were drawn by the acrid clouds of smoke.

City police blocked off several side streets and allowed only limited traffic past the burning fraternity house.

The major damage from fire appeared to be in the upper stories of the old building which reportedly was built more than 70 years ago. However, torrents of water from fire hoses being used in the attic area poured down stairwells and through doorways to the first floor and basement of the fraternity house.

Heller said the rear or south section of the house did not appear to be damaged by fire, although the entire structure was filled with heavy smoke.

MacRae, acting on the request of firemen, supervised efforts to retrieve property from the 20-room house to prevent looting. The fraternity president said that an hour after the fire broke out six on-campus fraternities had offered temporary quarters to all the Sigma Alpha Epsilon members.

MacRae said national officers of the fraternity were en route to Ann Arbor from Detroit a short time after they were notified of the fire.

National and local fraternity officers were assessing the damage and making plans for renovation of the house today.

The Sigma Alpha Epsilon house is familiar to many local residents as the site of the annual "Mud Bowl” games, a traditional part of homecoming festivities at the University each football season.

Two Ann Arbor firemen (above) are almost obscured by roiling clouds of smoke from the Sigma Alpha Epsilon fraternity house on Washtenaw at S. University. Firemen had the fire under control in 90 minutes but did not leave the scene until 1:15 a.m. today. Ann Arbor Fire Marshall John R. Williams (below) points to an electrical cable in a wall of a first floor room which apparently overheated and set fire to old timbers in the partition to start the blaze.