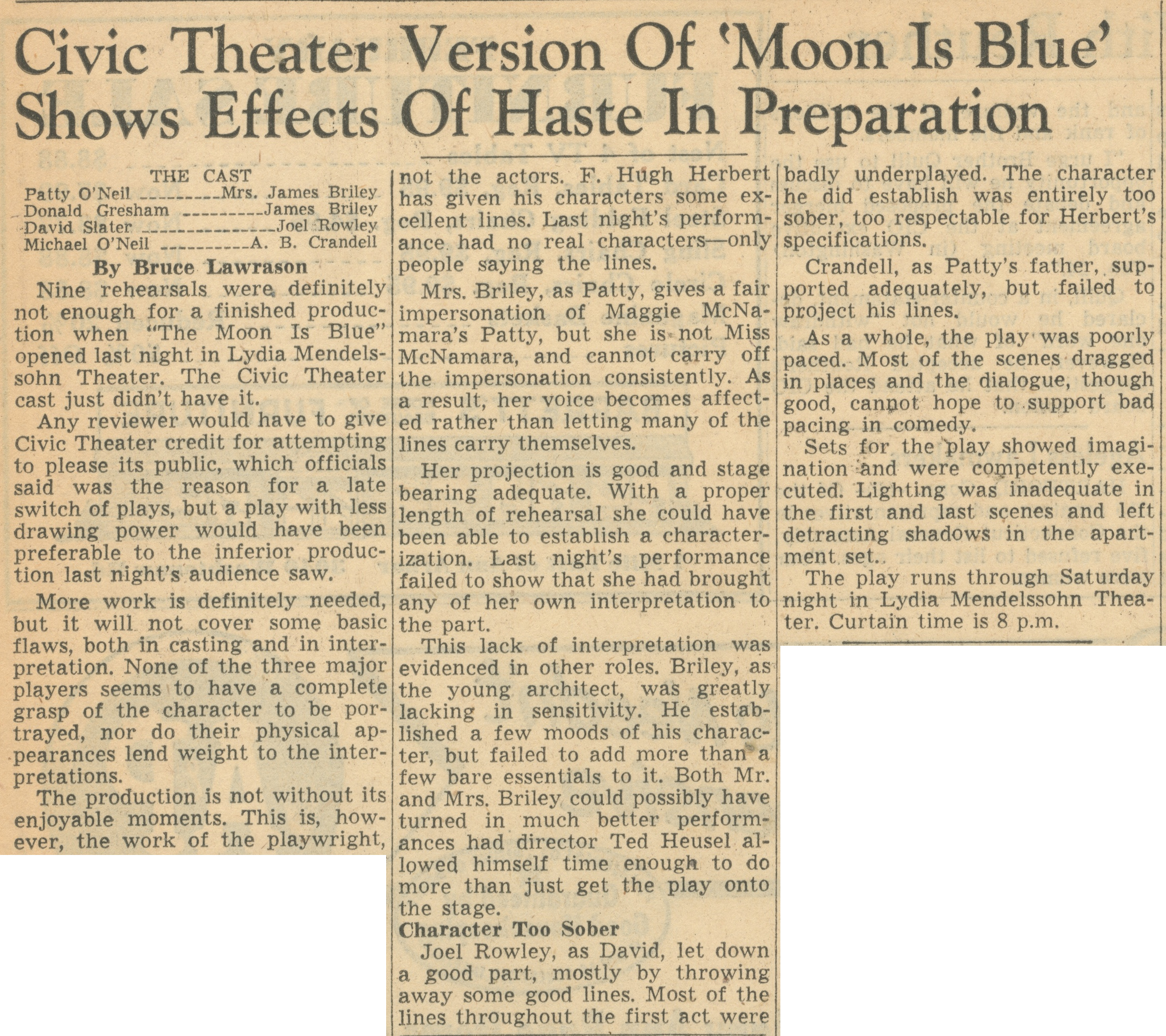 Nine rehearsals wera definitely not enough for a finished production when "The Moon Is Blue” opened last night in Lydia Mendelssohn Theater. The Civic Theater cast just didn't have it.

Any reviewer would have to give Civic Theater credit for attempting to please its public, which officials said was the reason for a late switch of plays, but a play with less drawing power would have been preferable to the inferior production last night's audience saw.

More work is definitely needed, but it will not cover some basic flaws, both in casting and in interpretation. None of the three major players seems to have a complete grasp of the character to be portrayed, nor do their physical appearances lend weight to the interpretations.

The production is not without its enjoyable moments. This is, however, the work of the playwright, not the actors. F. Hugh Herbert has given his characters some excellent lines. Last night's performance had no real characters—only people saying the lines.

Mrs. Briley, as Patty, gives a fair impersonation of Maggie McNamara’s Patty, but she is not Miss McNamara, and cannot carry off the impersonation consistently. As a result, her voice becomes affected rather than letting many of the lines carry themselves.

Her projection is good and stage bearing adequate. With a proper length of rehearsal she could have been able to establish a characterization. Last night's performance failed to show that she had brought any of her own interpretation to the part.

This lack of interpretation was evidenced in other roles. Briley, as the young architect, was greatly lacking in sensitivity. He established a few moods of his character, but failed to add more than a few bare essentials to it. Both Mr. and Mrs. Briley could possibly have turned in much better performances had director Ted Heusel allowed himself time enough to do more than just get the play onto the stage.

Joel Rowley, as David, let down a good part, mostly by throwing away some good lines. Most of the lines throughout the first act were badly underplayed. The character he did establish was entirely too sober, too respectable for Herbert's specifications.

Crandell, as Patty's father, supported adequately, but failed to project his lines.

As a whole, the play was poorly paced. Most of the scenes dragged in places and the dialogue, though good, cannot hope to support bad pacing in comedy.

Sets for the play showed imagination and were competently executed. Lighting was inadequate in the first and last scenes and left detracting shadows in the apartment set.